Sister Helen has kindly written the following account of this month’s outreach.

After a wonderful and encouraging outreach in June, in mid-October, we returned to London for a second shorter stay. The weather was a bit cooler and a bit windier, but we were enormously blessed with rather nice days and only occasional daytime rain. 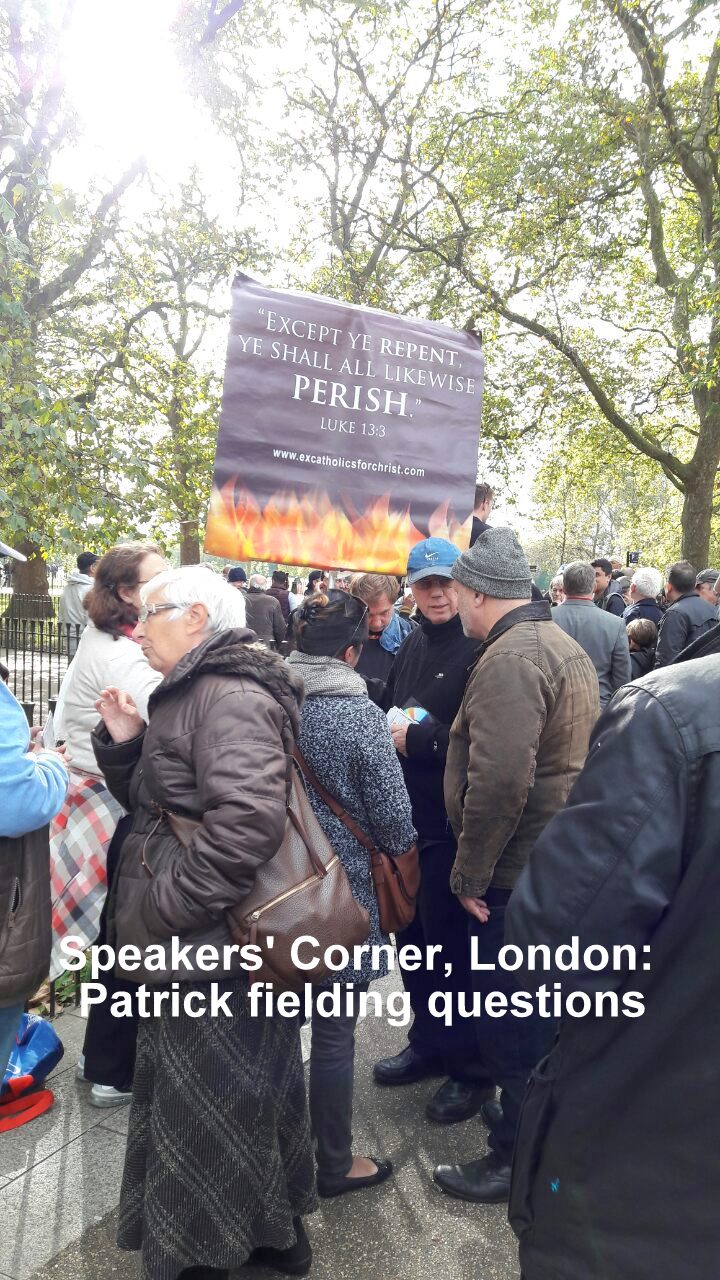 This time, our base was very close to Euston train station, which proved to be an enormous advantage. The station is an extremely busy crossroads with trains from Scotland, Wales, the Midlands and the rest of the UK, and a number of underground lines, plus plenty of shops. This allowed us to do early morning and late evening tract distribution every day with significant ease. 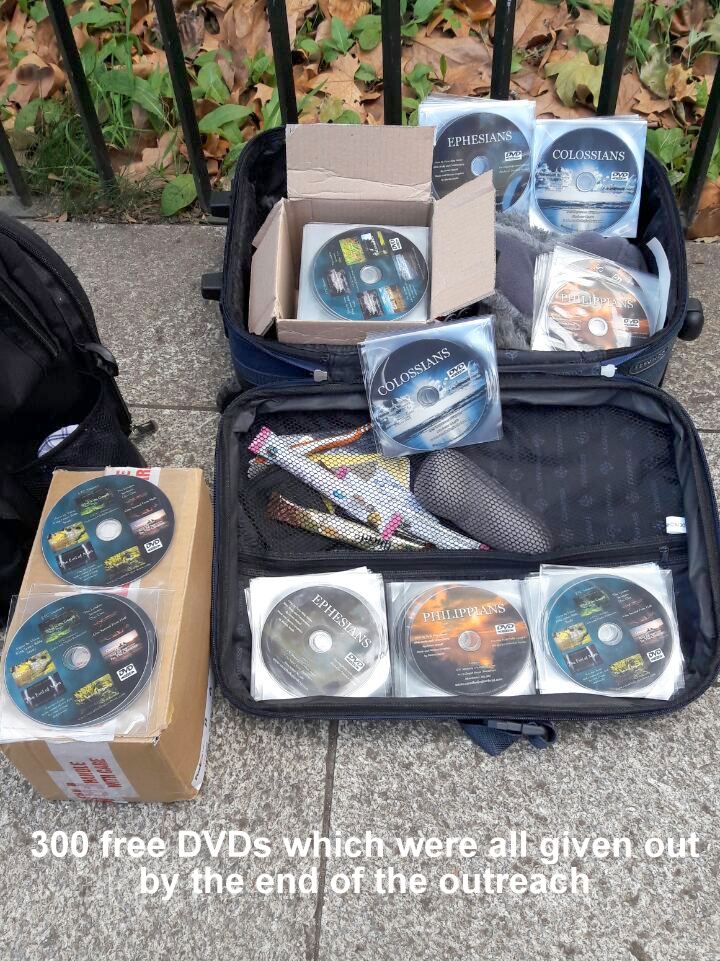 We saw the same trend as in June, as we encountered a broad diversity of languages and religions among both tourists and English residents. This was certainly a reminder to be prepared because it’s impossible to predict all situations, but the best preparation was Scripture and prayer. James did some great Bible studies in the morning (eight in total, including his live Sunday broadcast, looking at Revelation 6), but certainly only the Holy Spirit could aid us throughout the day to give “a good reason of the hope that is within you” (1 Peter 3:15). 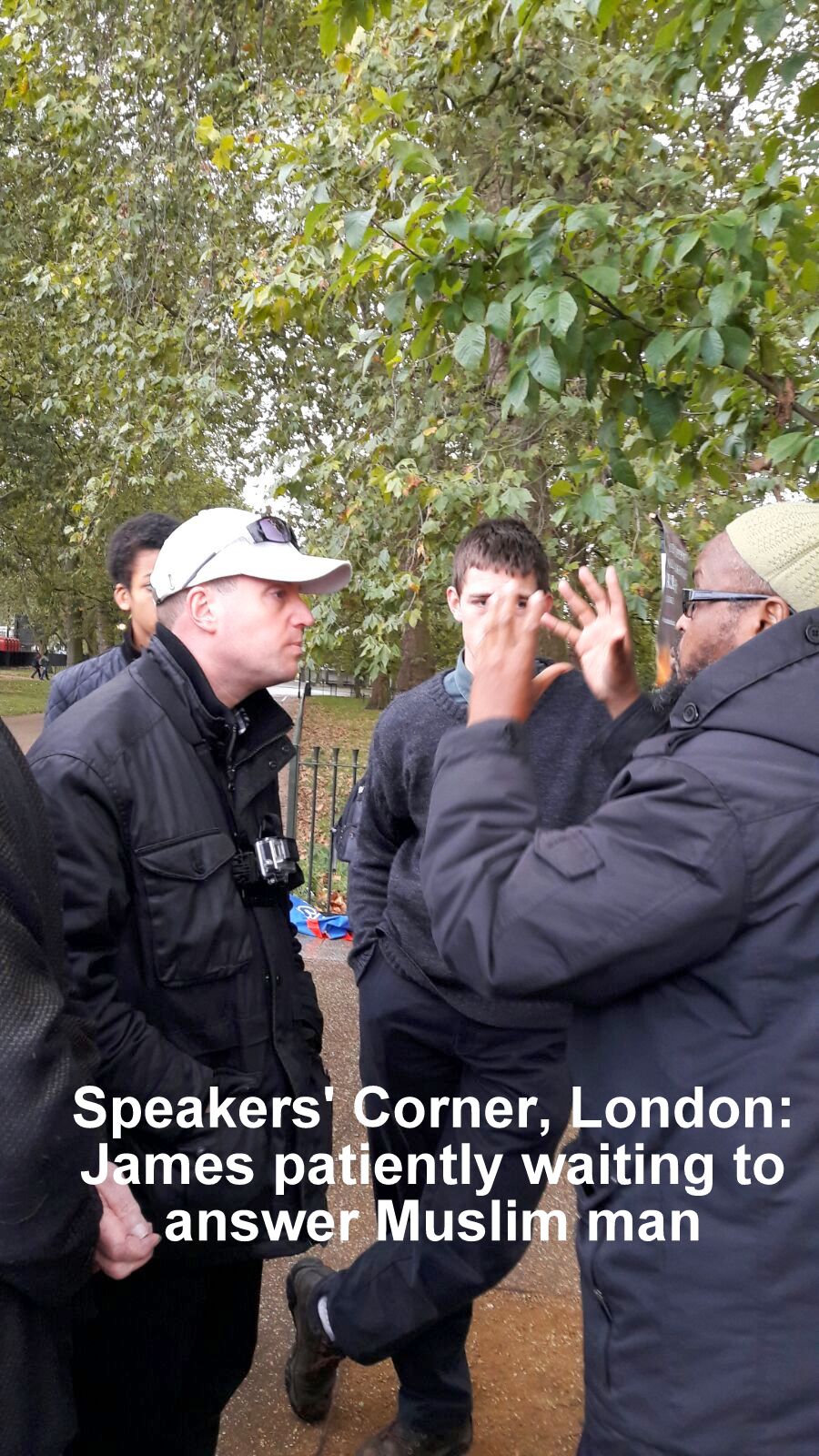 Our June visits to the British Museum area, Leicester Square, Kings’ Cross, Speakers’ Corner in Hyde Park and Piccadilly Square, Oxford Circus were repeated (one young tourist chap walked over to James and said “blankety blank your Jesus” during our outreach at Leicester Square), and this time we also made it to St Pancras train station, the British Library, and Trafalgar Square. Some areas proved more fruitful than others, but the banner was seen by thousands and many tracts were given out. 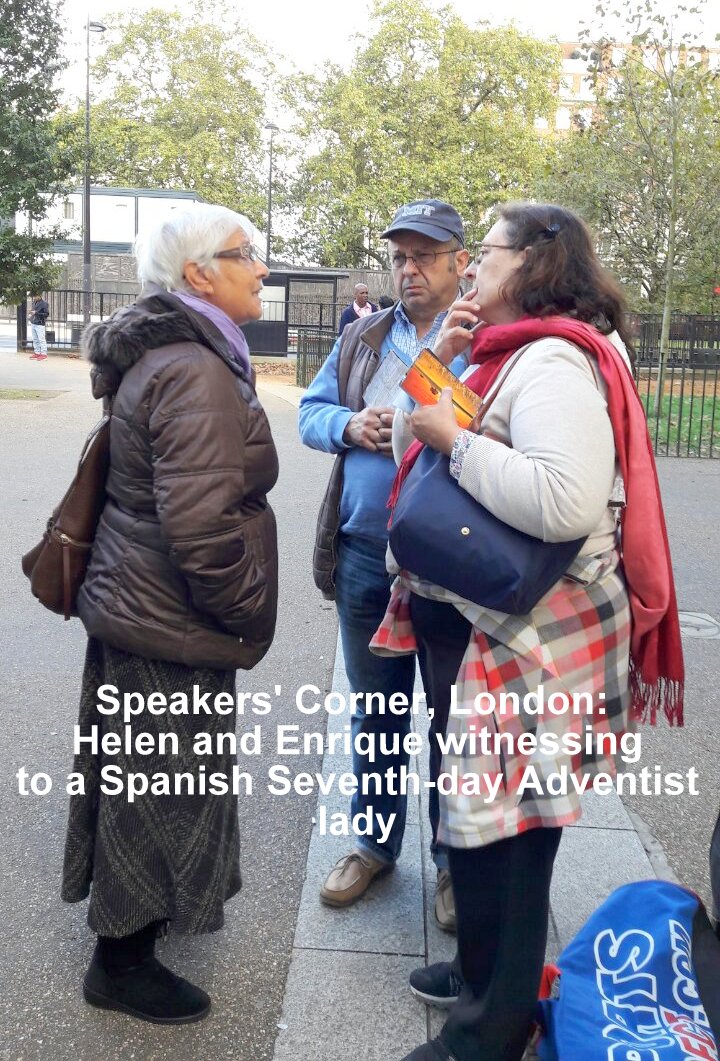 The highlight of our 7-day outreach was the time spent in Speakers’ Corner on Sunday afternoon, where we encountered a rather large and challenging group of Muslim men eager to take us on. It sure keeps you on your toes, as they will speak to anyone and everyone in an attempt to prove the gospel a mistaken philosophy. We held our own, but it was certainly the Lord that preserved us as we answered questions dealing with sin, purpose in life, Jesus’ divinity and work on the cross, how salvation is not gained, Sabbath keeping, inerrancy of Scripture, and whether or not Jesus was “racist,” etc. A good number of our encounters were recorded by these listeners and uploaded to their own channels, so only eternity will reveal the final effect among the many who view these Islamic YouTube videos. We also had some chats with a couple of Bible-believing tourists visiting Speakers’ Corner and others. 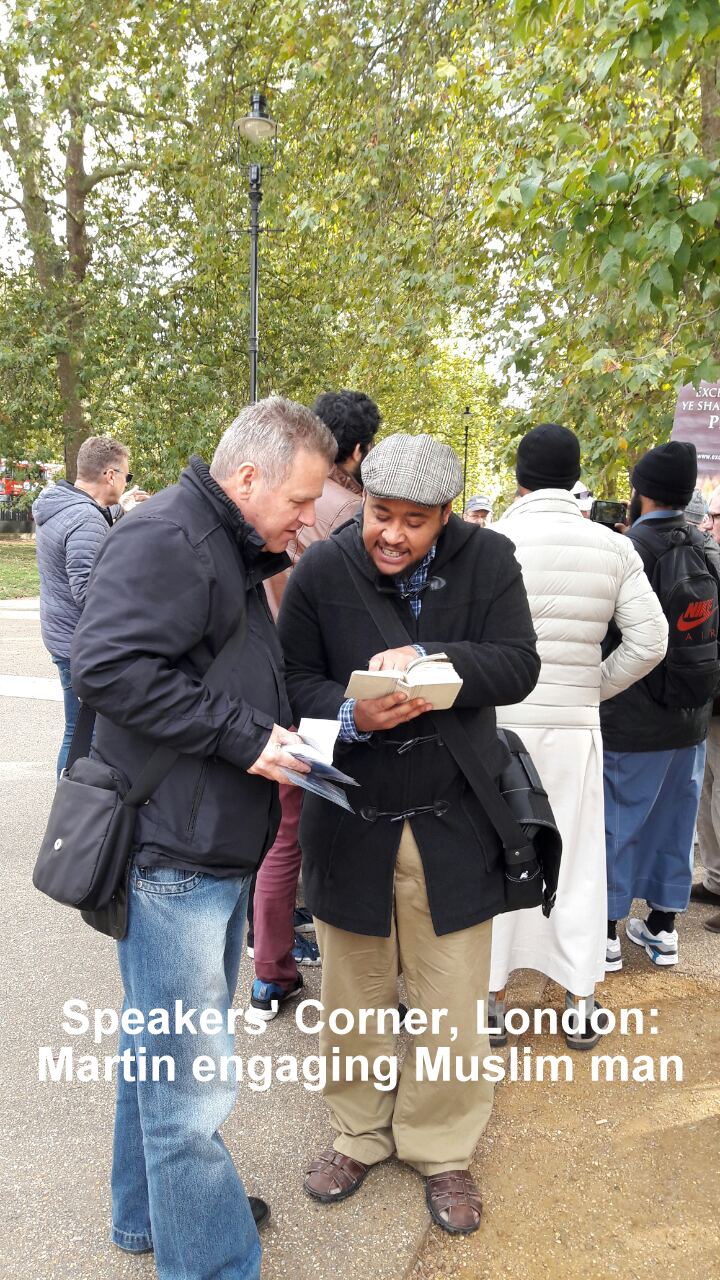 Other highlights:
–Albert in Euston Square, an 18-year-old man with an Anglican background who felt our message was too negative and would drive people away, but who was interested in the Scriptures and in the gospel
–Lynn in Oxford Circus, who said she was saved 5 years ago. She had just witnessed to the Hare Krishna dancing near us and told them to turn from their ways or they would go to hell

–Aiden, a KJV Bible believer we met at the British Library who thanked us for being there

–Rowan, a policeman who wondered about our tracts, took two of them and seemed very interested; he was happy to let us continue tracting

–A Japanese girl at the British Museum who talked to sister Tantri. 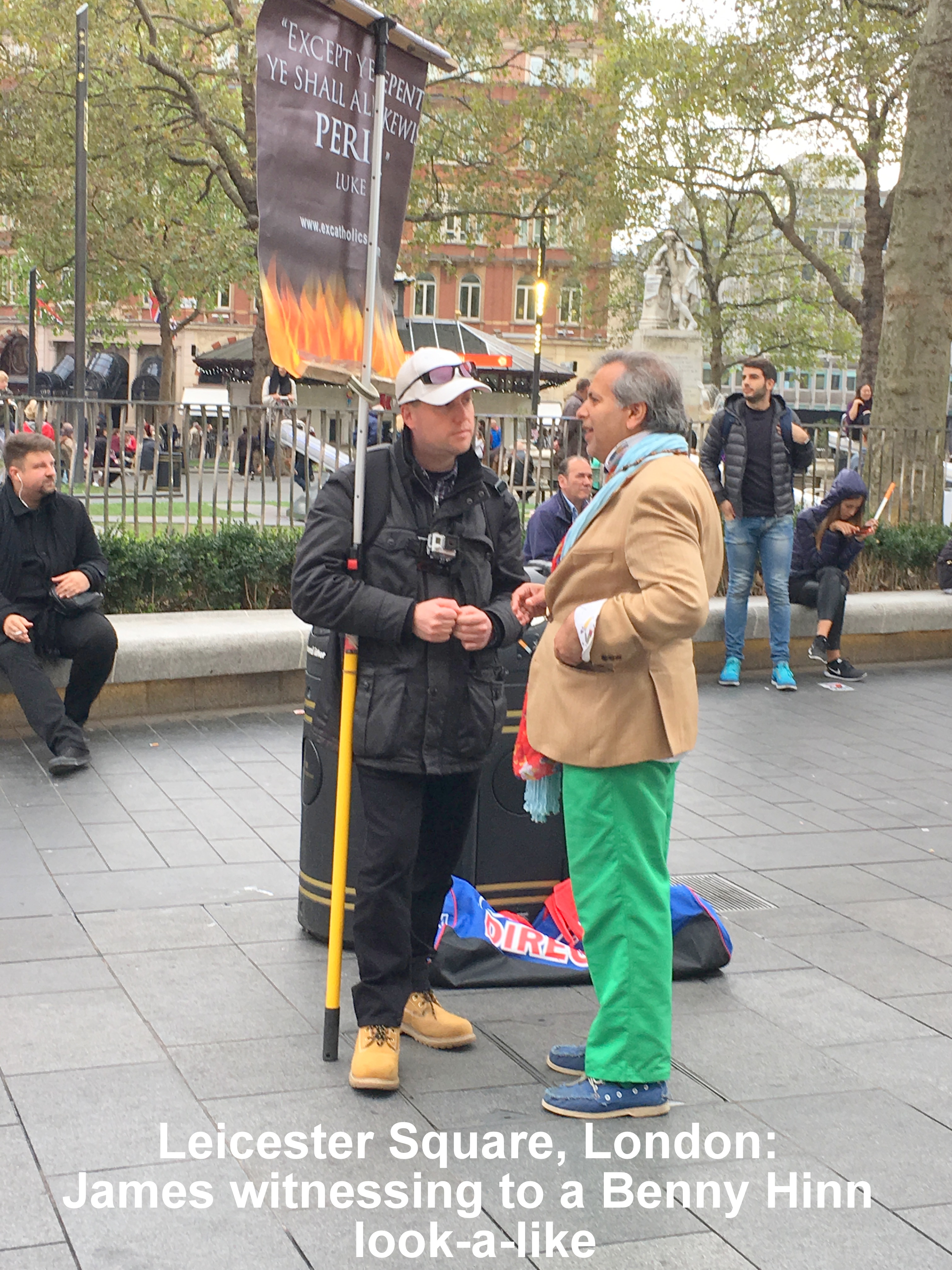 –Lewd Jamaican street rapper in Trafalgar Square who made fun of us publicly, but accepted a tract. 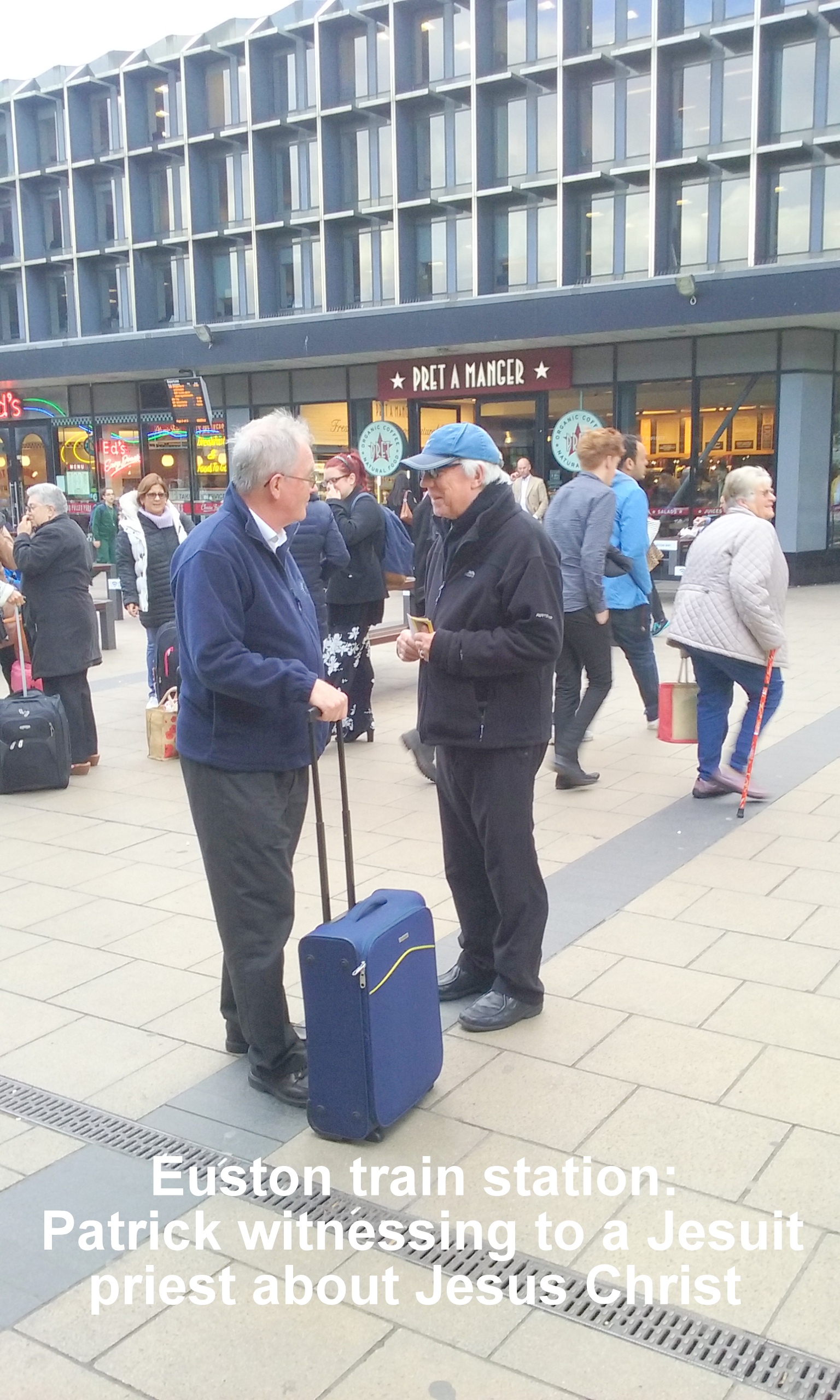 Other comments on the banner:

–I’m too (full in the blank) for that

–That’s a hateful message, try “Jesus loves you” (answer: both are part of the Bible’s message)

–What do you stand for, if you’re ex-Catholic? Henry VIII was also ex-Catholic! (answer: we stand for the Bible and don’t fellowship with Henry VIII)

–Wow, that verse is so true (from a Catholic priest running by!)

–So glad to see you out here (Bible believers). 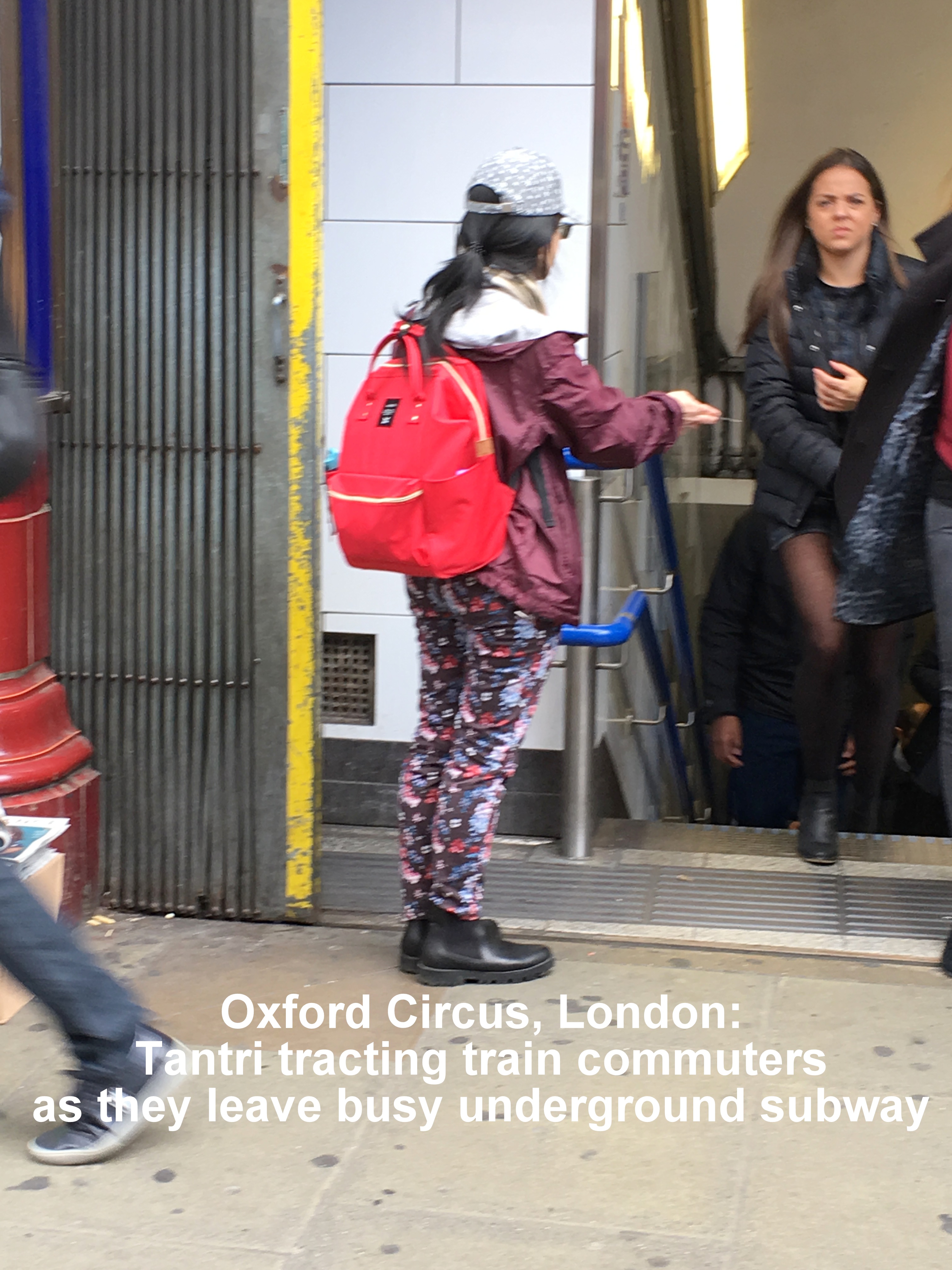 Comments on tracts
–I really like your tracts, they are nicer than most; the message is great

–Thank you, I’ll be sure to read it (from an Orthodox Jew)

–What’s this?
–I’m a very committed Buddhist, don’t push your religion on me
–I’m not from London

–Are you Jehovah’s Witnesses?
–Why don’t you get a job?
–Why are you not wearing a cross? You’re a dog, you must not be a Christian. 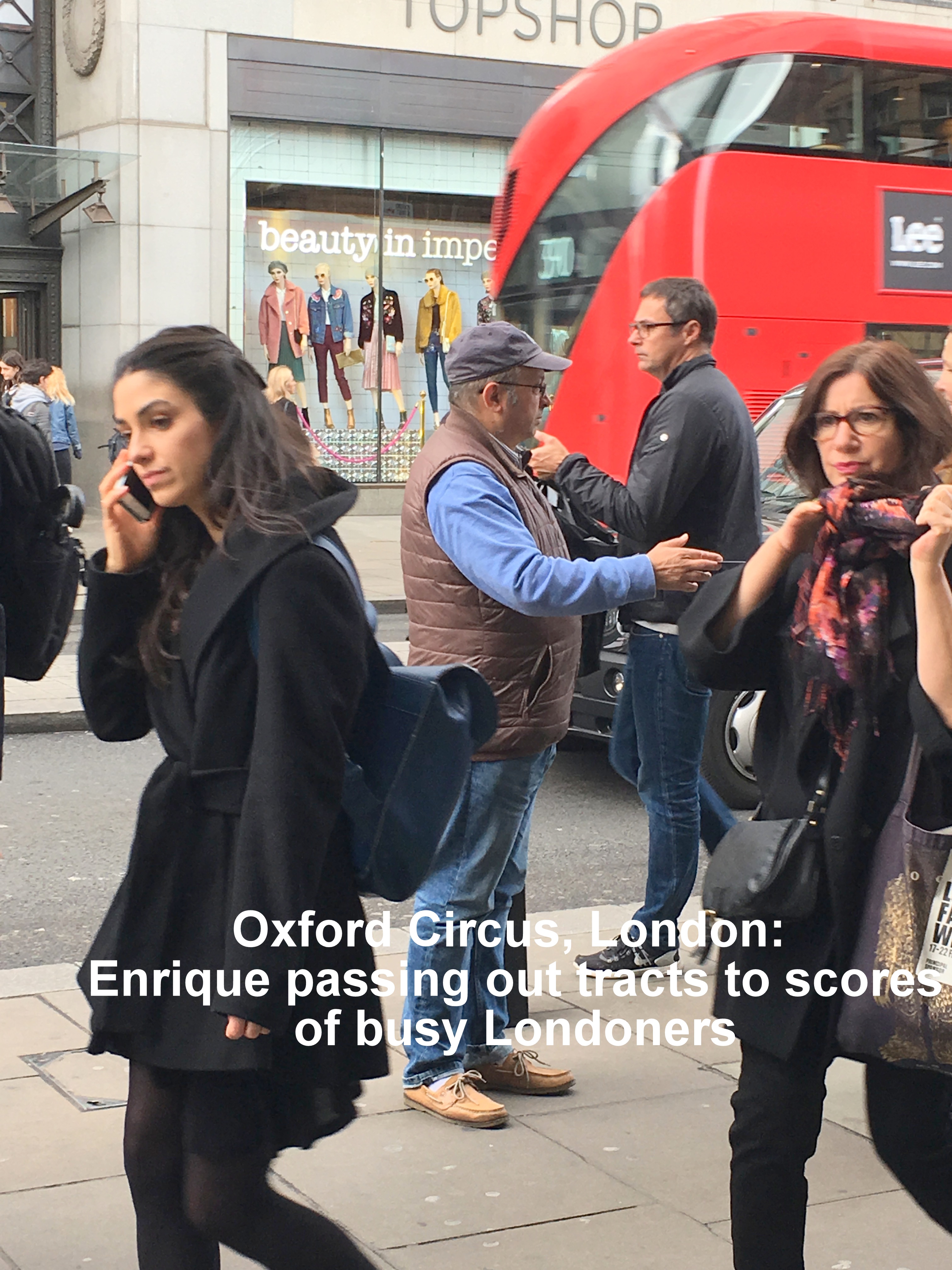 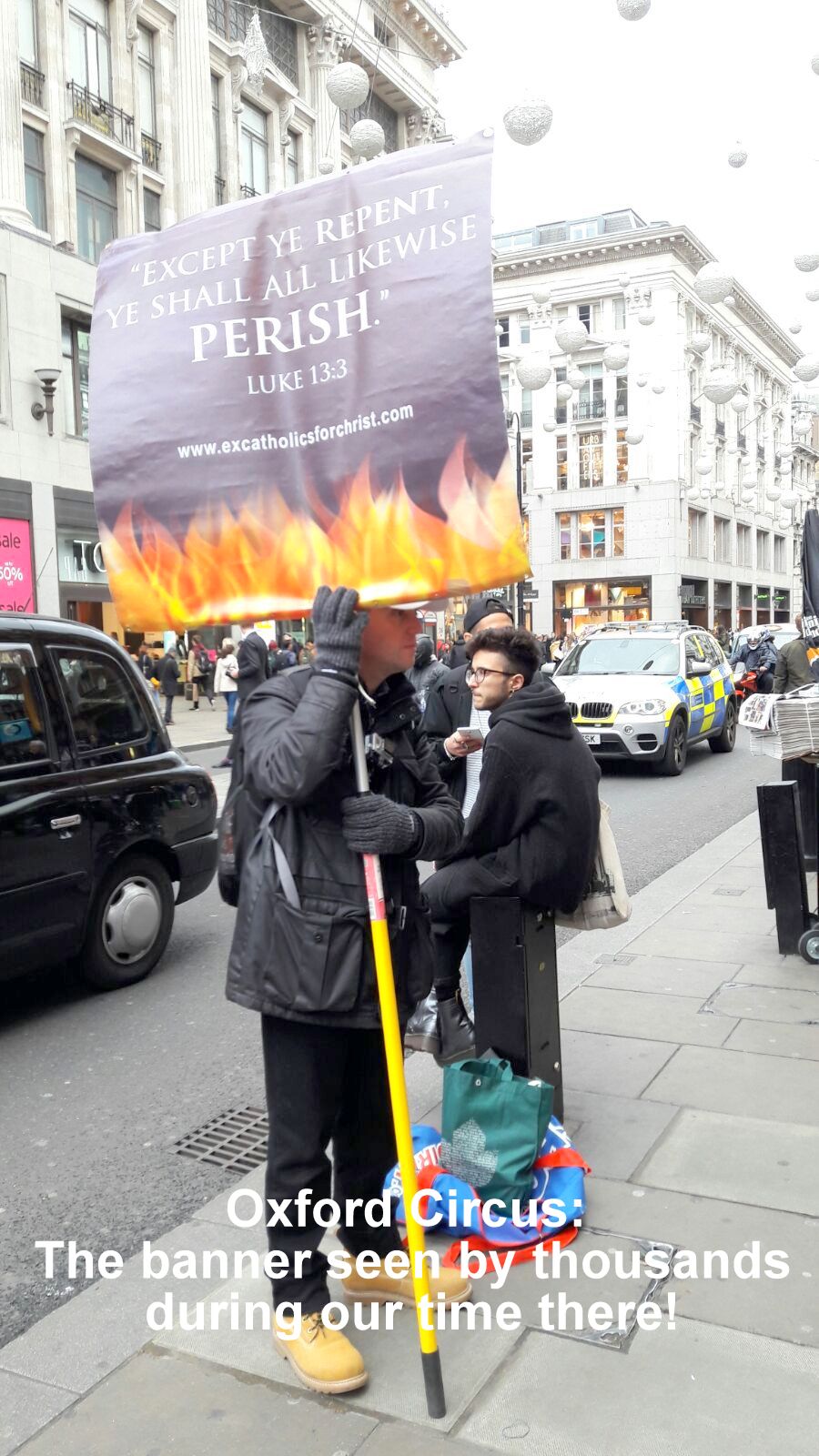