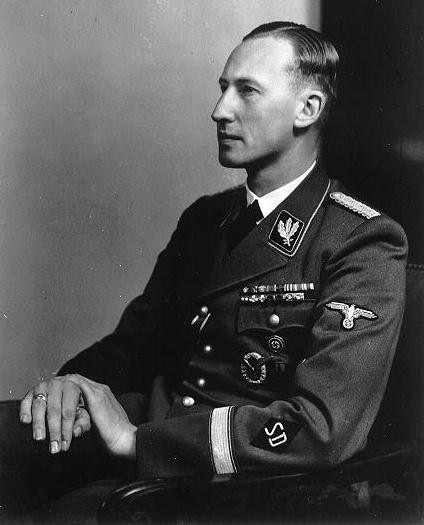 Popularly nicknamed “The Butcher of Prague,” (party number 544196) Heydrich was actually born in the town of Halle in Saxony. Its most illustrious son was no, not Heydrich, but George Friedrich Handle, who composed the famous “Hallelujah Chorus.” Always a favourite of us at this ministry, especially at Christmas.

Heydrich’s father, Bruno was a prominent musician. Being an Evangelical Christian, it seems and a Freemason of the Orient Lodge!

His mother, Elizabeth, however, was a devout practising catholic and it would be her choice to have the young Reinhardt baptised a Catholic. In later years Heydrich would include the political Catholic church as an enemy of Nazi Germany (but hadn’t the Nazis signed a concordat with the Vatican?) Also in his future sights were the Jews and Freemasons (wonder what his old dad thought about this grudge of his son?) Yet I suspect the old saying, “Once a catholic always a catholic,” would always apply to Heydrich and his conscience, if indeed he had one!

In 1931 he married Lina, herself a catholic, who had been convent educated. They would have three children. All are still alive today.

Soon after his Nazi career started to accelerate, whispers began to be heard that his blood might be contaminated with Jewish traces-not a good thing for a Nazi to recognise about himself. Naturally, Heydrich denied such a charge. But one has to ask if it were true then what tribe was Heydrich descended from?

Might I suggest the tribe of Dan? Who first appear in Genesis and have disappeared by Revelation!

Interestingly Heydrich would expire in the hospital of septicaemia blood poising in Prague after the orchestrated assassination attempt. So it’s all in the blood as they say!

During the next ten blood thirsty years, Heydrich in “his Luciferic coldness of emotion….and lust for power,” would as Hitler’s loyal henchman, happily sign death orders for thousands of opponents and send generations of Jews to the concentration camps. (This so-called final solution had been decided at the Wannsee conference 1942. Look out for the actor Kenneth Brannagh portraying Heydrich in the BBC film of this event. Some Brilliant acting on his part.)

But it would all end for Heydrich, when in 1942, a botched attempt planned by the British Secret Service-actually succeeded. Heydrich would die after three suffering days in a Prague hospital. Later the town of Lidice would be eradicated as a reprisal with many more being murdered at the hands of the S.S. Few it now seems had anything to do with Heydrich’s murder anyway.

The Nazi stage was then choreographed for two funerals of sickening pomp and Nazi ritual. The first was held in Prague where the body was brought to the Hradshin Palace. Naturally to lie in state. Interestingly the Catholic Archbishop of Prague, requested with other brother Bishops, to participate in the ceremony, even suggesting the bells of the cathedral be rang in tribute to this Nazi Butcher! Himmler, after consideration, declined the request. But I suspect Heydrich would have relished this gesture from his own church. He may even have been offered the last sacraments after a suggestion from his wife for a priest to be called to the bedside. Who knows?

Later in Berlin “This evil young god of death,” as someone named him, was honoured with a hero’s funeral. Hitler naturally attended as well as Heydrich’s two young grieving sons (watching a grainy film of the event, I could see neither his wife Lina or her daughter-not sure why. But I’m sure the Vatican nuncio was there!)

For the occasion, two memorial stamps were issued. 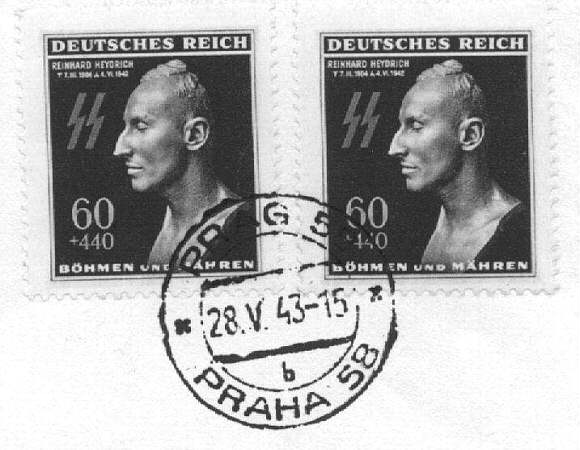 Since the wars end and the death of his wife in 1985, confusion has reigned of where Heydrich is actually buried.

Rumour has yet to be confirmed that he was transported to the family vault of his late wife’s family on the beautiful Island of Fehmarn. (Incidentally, Jimi Hendrix played a gig there in 1970. There’s even talk of a possible statue to be erected to no, not Heydrich, but Hendrix on the Island.)

I’m told on a clear night you can hear the wail of Jimi Hendrix’s guitar as he plays “purple haze.” (Was Hendrix another dead pop star who sold his soul to the devil do see our link page for videos.) But remember in Hell, dear friend, “There shall be wailing and gnashing of teeth” (Matt. 13:42). If that doesn’t concern you, then I don’t know what will.

For Heydrich it’s all too late, but what about you? Are you saved?

Reference work was Heydrich, The Face of Evil, by Mario R. Dederichs, 2005.

News reports that Reinhard Heydrich’s son wants to raise money to restore a castle near Prague, where his father ruled form 1941, have caused controversy. With the use of EU money for this purpose, it can only help to enshrine the memory of the Nazi “Butcher of Prague.” Instead, the castle which is now dilapidated should be demolished and soon. We suggest a children’s playground/rose garden might be more appropriate and dedicated to the memory of his many innocent victims of that terrible period.

This year is the 70 anniversary of the shooting and eventual killing of the so-called “Butcher of Prague,” Reinhard Heydrich. Then days after the shooting on May 27, he would in fact eventually die on the 4th June 1942.

Codenamed “Operation Anthropoid” the successful mission was devised and planned in Britain, resulting in two Czech and Slovak soldiers being sent to Czechoslovakia. Their mission on arrival to was to kill the detested Heydrich.

Amazingly on the 27th May 2012, I was able to obtain a DVD myself entitled: “Hangmen also die,” and filmed just ten months after the shooting, it was made in Hollywood under the distinguished German director, Fritz Lang, in 1943.

The film bears little resemblance to what factually happened in the events that finally silenced forever the brutal reign of the Reich protector Obergruppenfuhrer, Reinhard Heydrich. But it is, however, worth a view if you can find a copy.

Also hitting the bookstalls (including Kindle) are assorted Heydrich books and news articles. One, for example, does have some factual errors concerning Heydrich and his court-martial and dismissal from the German Navy in 1931.

So it seems after all the hangman just won’t lie down quietly and go away.

In his book Prague Fatale, 2011, author Philip Kerr, suggests that Heydrich was involved in the murder of a fellow SS officer, outside of Prague. He further implies that “The Beast of Prague” stole the idea from Agatha Christie in her book The Murder of Roger Ackroyd. Now I’m not sure how Dame Agatha would have felt about this unusual idea, but I would never have thought of Heydrich as a fan of English crime books either. Where would he have found the time?