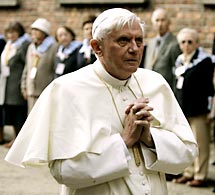 At the end of his four-day trip to Poland, Pope Benedict XVI paid a third visit to Auschwitz Concentration Camp (first time as pope, however).

On arrival, flanked by his scarlet-robed entourage and muscled suited minders (very dramatic!), he walked beneath the wrought iron gates emblazoned with the stark words “Arbeit Macht Frei” – or “Work Sets You Free.” Then he paused before the notorious wall of death and prayed in this most solitary of sites.

“Lord You are the Lord of Peace,” he declared in German. Yet did not Christ proclaim in Matthew 10:34:

“Think not that I am come to send peach of earth: I came not to send peace, but a sword.”

And here lies the contradiction between the inspired Holy Bible and the utterance of the pope and his church.

(Please click here to see our video diary, that we filmed in Dachau Concentration Camp, in 2007).

Today Auschwitz remains a sombre and terrible warning to what man has contributed to this fallen world. And frequently in the guise of all religions.

This sinful world can never ever amend itself. It’s impossible. This will only occur one day very soon, we anticipate when Christ returns and claims the title deeds to planet earth. After all, wasn’t it always His in the first place? Christ is the eternal Architect. His finishing triumph to a renovated world is yet to happen and be blessed by Him alone.

But as I watched the white cassocked figure of the pope standing alone (for a second or two I imagined I saw the ghosts of five young German students watching him with great interest.) Remember these young people in their early 1940s would have been about Ratzinger’s age. And this at the time when he was serving in the Wehrmacht. Later after a posting to Hungary, it is claimed amongst other things, Private Ratzinger observed many groups of terrified Jewish families and others being herded on to cold filthy railway cattle trucks without water or sanitation to arrive days later at a destination with death in Auschwitz!

Then in those uncertain days so long ago, those five courageous students, I suggest represented all that was decent in opposing the Nazi regime and its hideous ethnic policies.

(Sophie flanked by her brother on the left and Christoph Probst right.

The picture was taken in Munich, 1942, a year before they were murdered)

Their names were Hans Scholl and his Protestant sister Sophie Magdalena.

By 1943 all six members of the group known today as “The White Rose” were to be arrested, tortured, sentenced and wrongfully convicted of crimes against the state. Oh, and by the way, all were to face death at the end of a guillotine blade.

Experience has shown that by that method of execution (and incidentally it will return during the Great Tribulation!), several attempts were used by the executioner to completely sever the head. We can only pray that the murder of these young people was swift and final.

(Before Sophie was executed, she was allowed to spend some precious moments with both her ailing and proud parents. As mother embraced daughter, she whispered in her condemned ear, “Remember Jesus.” Sophie replied, “And you.” Sophie’s childlike faith remained with her until the end.)

But in returning to that wet Sunday in Auschwitz as the pope silently prays, does not Sophie reach out and say almost accusingly to this German pope:

“Where were you Joseph? You must have known of our important work and who we were. And how dangerous it was. We distributed over 9,000 leaflets in all manner of places and always calling for an end to Nazi crimes. But where were you, Joseph? Did you ever stop and read one, Joseph. And if you did, why didn’t you join us to help reverse the terrible war machine of the Nazis? Why Joseph, Were you afraid? Were you?”

Now perhaps from the corner of his damaged eye, the pope sees the pleading face of Sophie Scholl and her whispered indictment. Then suddenly rather like the vapour of the cyclone B gas, known so well in this cruel camp, this young woman, her brave brother and friends whisper an unheard farewell and are quickly gone.

Today they remain the lasting legacy of the White Rose group that was the finest of German youth. And maybe Ratzinger perhaps remembers them through the mist of time, then sighs and turns to leave.

And now it is time for the papal caravan to be prepared and depart from this accursed building. And as the pope is about to leave the brushes some settled ash from the sleeve of his cassock, only then is he escorted with a salute through the open gates in his armed Mercedes. And never once does he pause or even attempt to look back. 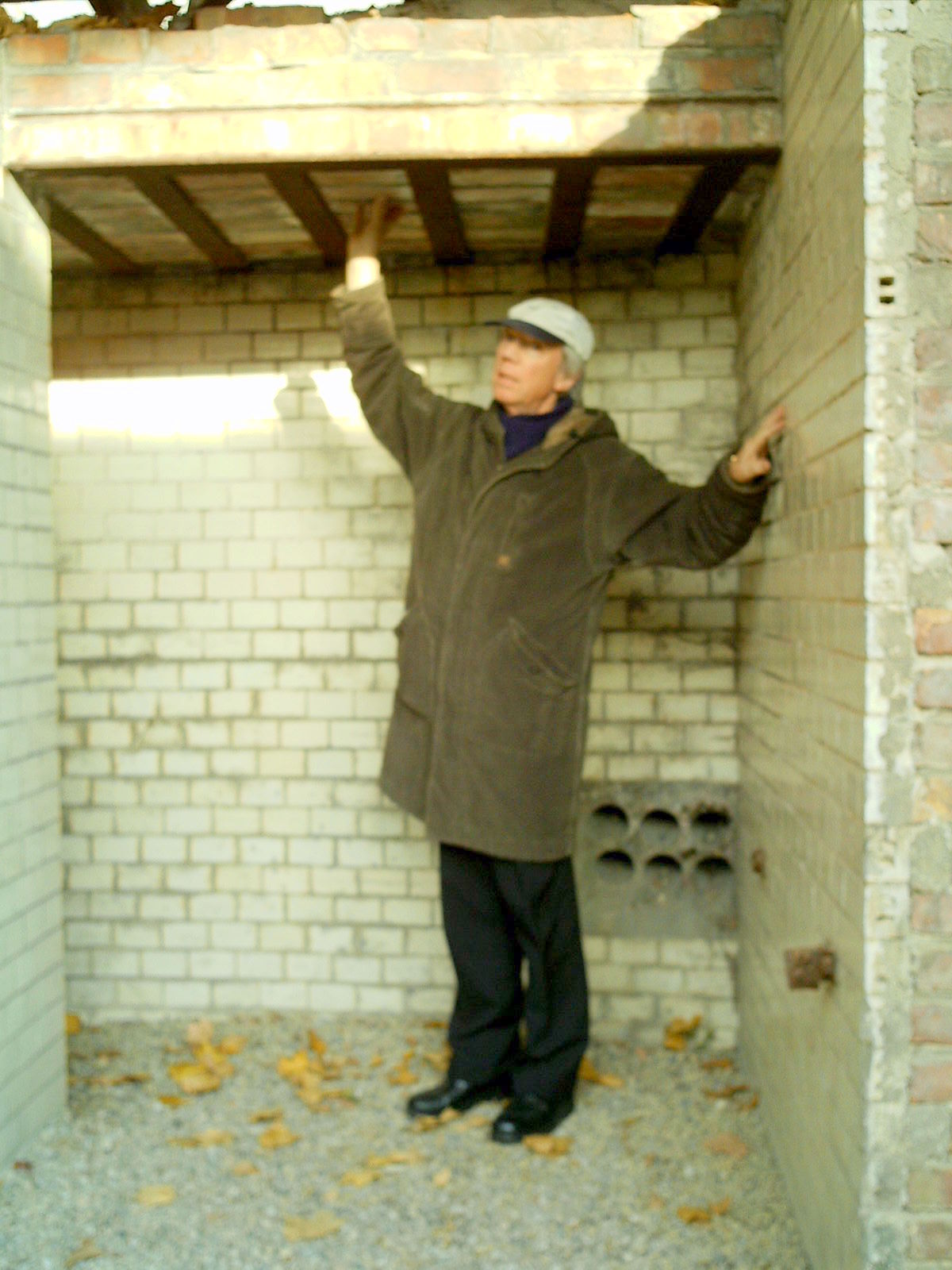 (Patrick demonstrates just how small Sophie’s cell would have been, as she awaited execution.

This picture was taken at Gestapo HQ, Berlin, in November 2006)

This article wouldn’t be complete without linking our video diary, taken when we visited Munich University in 2007, which allowed us to capture some interesting material on Sophie Scholl and her small group.

In 2005 a German film was released of this group on DVD. I recommend it to anybody who would like additional information about this brave and peaceful group.

In researching this article I came across a quote from Traudl Junge, she had the dubious distinction of being Adolph Hitler’s sometimes personal secretary. This is what she wrote:

“I realized that Sophie Scholl was the same age as me and I realized that she was executed the same year I started working for Hitler. At that moment I really sensed it was no excuse to be young and that it might have been possible to find out what was going on.”

Further information of this period of German history can be found in Bruce Stanley’s informative book The White Rose.