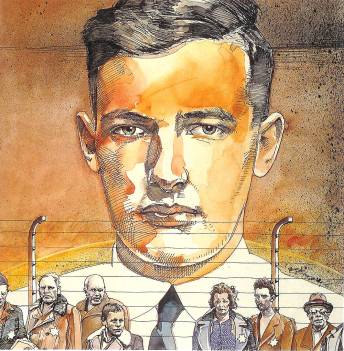 This year and August 4th to be precise is the one-hundredth anniversary of his birth in 1912, in Sweden. But today so much of the man and his mysterious disappearance still sadly remain unanswered.

“Raoul Wallenberg is the Swedish saviour of almost 100,000 Jewish men, women and children,” so remarked President Ronald Reagan in 1981, when he bestowed an honorary citizenship of the United States medal on the memory of this special Swede.

And of this statement, Reagan was correct concerning the Swedish diplomat and humanitarian.

Raoul Wallenberg came from a notable Swedish family of wealth and diplomacy, in fact, the family motto was: “To be, not to be seen.” Later as a young man, he would travel to America and on one serious occasion, was robbed at gunpoint for his wallet, whilst hitchhiking.

He would later earn a degree in architecture, from the University of Michigan. But to gain some financial banking experience at the request of his family, he found employment in South Africa and later in Haifa, then under the control of the British Government. It was maybe there that he first heard alarming accounts concerning the atrocities, then being committed against the Jews who were fleeing from the race laws in Nazi Germany.

Interestingly at about the same time, Adolf Eichmann had also journeyed to Israel to visit the kibbutz system and gain some knowledge about the Jewish faith and its inheritance. (Of course, God would never allow this to happen against the chosen race.) But Eichmann’s sojourn there seems to have been curtailed by the British customs. There is also no evidence either he ever made the acquaintance of Wallenberg, but it would have been a small European community who socialised and gossiped over drinks and tea in the warm evenings and indeed their paths could or would have crossed if only briefly at a rail terminal or elsewhere.

In fact five years later, Eichmann now a high ranking Nazi, would play a dangerous role in Wallenberg’s own life, during his Budapest mission in the search and rescue of Hungarian Jews.

In 1942/3 Wallenberg was employed in an import-export firm, yet for obvious reasons, the Swedish Government recognized in him a man, who with later assistance, might be able to secure the release of many Jews, soon to be deported to numerous camps.

Diplomat Wallenberg was now a man with a mission to speedily secure the release of as many Jews as possible in the shortest time allowed him. His half-sister Nina recalled of that period of her life: “I had no idea at the time that his mission would be as dangerous as it turned out to be.” And she was correct. In Budapest, her brother was entering a nest of vipers, then being controlled by the notorious Hungarian, “Arrow cross-party,” very similar then to the workings of the German Nazi party, with beliefs in racial purity and a loathing of the Jewish race, all too similar as Hitler’s. Through the “cross” regime, over 20,000 defenceless Jews and others were arrested and attacked.

Overseeing all this misery was Lt. Col. Adolf Eichmann, and he too had an agenda in implementing “The Final Solution,” as ordained at the Wannsee conference, that was finalised in 1942. And nearing the gates of Budapest was the advancing Russian army, followed as always, by the notorious, NKVD, the communist secret police, and they too had an agenda to submit most, if not all of Europe, under Stalin’s boot.

Wallenberg was not to know it at the time but with the arrival of this conquering army, his own days as freeman were diminishing, rapidly.

If Raoul Wallenberg’s future fate became tragic, his rescue of thousands of Jewish lives from Eichmann’s murderous hands would be a triumph in the dying days of the war. One author claims that Wallenberg had three long meetings to discuss the rescue of the Jews within Eichmann’s office. One can only speculate on how the discussions between the two men progressed and were finally to be resolved.

Eichmann, interestingly years later in his penned memoirs, written in Israel, before his execution by hanging, offers no information on Wallenberg or his meetings with other Jewish organizations, then operating in the same arena.

However in 1944, through the Swedish legation, he would issue thousands of protective passes, known as “Schutz-Pas.” With this official “passport,” time had been bought for those fortunate to obtain one. Soon a plaintiff cry emanated from the ghetto’s that: “Wallenberg is coming” and he did just that, with many close encounters, with the authorities once even arriving on a cycle bicycle after his car had been stolen and sabotaged by Hungarian police, perhaps on orders from Eichmann.

He seemed always fearless and one occasion in November of 1944 is photographed negotiating with Arrow cross officials for the release of detainees. He dressed in a long overcoat and homburg hat stooping down to listen to the excuses offered to him by the police. It is an amazing photograph of the man that shows him at his most excellent.

Finally, the last sighting of Raoul Wallenberg was on 17th January 1945. He refers to himself as a prisoner or a “guest,” jokingly to his staff as he departs. Later he will be accompanied by the Russian secret police, NKVD or SMERSH and then placed on a train to Moscow for future interrogation at the infamous Lubianka prison, the then sinister building of the NKVD. After this much about this remarkable man and his movements are lost in the mists of time.

So many theories about his disappearance after 1945 are legendary but most of them are speculative and we cannot or will perhaps never know the full truth of the man or his remaining years. What faith he had if any perhaps sustained him in the lost long years that stretched ahead of him in Stalin’s penal servitude.

It certainly seems clear that Wallenberg was forcibly detained and interrogated in Moscow between the end of the war to 1947. The cold war paranoia would fuel the suspicions of the communists that Wallenberg, with his American connections, was a spy. It would be another ten years before the Soviet’s grudgingly stated in a letter that Wallenberg had died of a heart attack on 17th July 1947, and that should have been the end of the story, well as far as the Russians were concerned. Yet fresh sightings of the man would be reported over the next twenty years, with many emanating from released prisoners. One such witness was the arrested British businessman, Greville Wynne. He later claimed to possibly have talked to him briefly in the early 1960s. Another inmate claimed that when he had had the opportunity to quickly converse with apparently Wallenberg, he was informed that he was a Swedish diplomat, being held “through a great error.” This certainly sounds rather like Wallenberg and the language he would have used.

I have to suspect that the Swedish diplomat was being held, perhaps on Stalin’s own personal orders, to be detained as long as possible, as a future bargaining chip. However, when Stalin died in 1953, Wallenberg’s use was perhaps finished and then sadly he would be lost forever in the vast gulag prison system that scared the country in those pre-glasnost days.

Yet many witnesses still claimed with conviction that he was still alive, somewhere, even in the 1980s. So the flame of hope by his family was kept burning, never to be dimmed.

Interestingly in 1989 a sealed heavy packet containing his diplomatic passport, his diaries, a cigarette case, assorted currency, with other items were delivered to his half-sister, Nina Lagergren in Moscow, in person.

She would write of this emotional moment that: “To hold these things in my hands were both a wonderful and a painful thing.” And incidentally, Nina’s daughter, Nana, would later marry, Kofi Annan, the former Secretary General of the UN.

In my previous article concerning Heinrich “Gestapo” Muller, there was some evidence that late after the war, when Muller had fallen out with his Soviet masters, he had been confined to the artic volkuta gulag. One notable prisoner, also in forced residence in that bleak terrain, was perhaps Raoul Wallenberg.

In 2010 the recently opened archives of the Russian security service claimed that a person, identified only as Prisoner No. 7, was interrogated a week after Wallenberg’s supposed death in 1947 death and, “with great likelihood,” this was Wallenberg, so the document stated. This new information was reported to the Swedish magazine “Fokus” and other news wires.

If this account is accurate then Raoul Wallenberg somehow must have survived long after the war as a prisoner in the communist penal system. Finally, in my opinion, only one man can finally close this mystery and bring it to a conclusion and that is Vladimir Putin.

He has surprised many in the past by his decisions and indeed this would be a lasting legacy to his place in history. And it would certainly offer the remaining Wallenberg family some closure for them and their country.

“Raoul Wallenberg’s fate has lain like a dark cloud over our existence,” wrote Raoul’s stepfather in 1952, in his diary. Indeed the pain of his family must have been agonizing.

Sixty years later, in this the centenary of the birth of diplomat Raoul Wallenberg, there can be no greater gift to the surviving members of his family and a world that proudly remembers him through the naming of avenues, forests, parks and schools; and of a musical tribute to finally open the remaining sealed files on Raoul Wallenberg, now a citizen of the world who saved thousands of lives, but sadly was unable to save himself.

“And as it is appointed unto men once to die, but after this the judgment.”

To save a People, Alex Kirshaw
Wallenberg is here!, Carl Steinhouse
The fate of Raoul Wallenberg, Dr. V. Birstein And Susanne Berger, 2007

And a special thank you to the Consular assistant, Gunnel Taylor of the Swedish Embassy in London, for her assistance in preparing this special article.

P.S. The Israeli Government has asked Interpol to assist them in obtaining any further information about Raoul Wallenberg and his final fate. And Israel should be also commended for having the courage and the privilege to permit the face of the man who did so much to save so many in such a short time in those final days of the war to be sealed on to their stamps. The stamp shown here is from the author’s own collection.