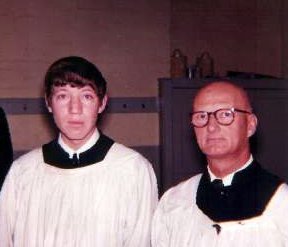 (Getting ready to serve mass)

In 1964 I was living in Purely, Surrey. In those days Purely was a very middle-class area and proud of it. My parish church was the Catholic church of St. John the Baptist. I had, in fact, had a very early introduction to the church, when my family lived just around the corner (literally), it was our parish church.

I clearly recall many happy memories and parish occasions when as a boy I elected (or might have been asked) to serve the early morning mass (6 am) at the church. In those days this morning devotion was very well attended. This was well before Vatican II had even been plotted.

The parish clergy was headed by the very popular Canon William Denning D.D. (I shall forever remember him chain-smoking his very expensive Abdullah cigarettes, whenever I would visit him in his crowded study). He was a contemporary of the bishop (in those days, Cyril Cowdry). I sometimes felt, as did others, that he (the canon) should have been the Archbishop of Southwark, and not Cyril, who after all was a convert! Even in the clergy, there is spiritual jealousy it seems! (One other name that should be mentioned was “Fr.” Paul Brassell, S.J. This Jesuit, for some unusual reason, spent much time in this small parish).

Also serving in the parish was “Fr.” Burke, a quiet scholarly man. Tall and thin, with red wavy hair. He also wore clear rimless glasses, the first I had ever seen. I liked him.

Later he would be replaced by “Fr.” Turner who I also liked. His claim to fame in the parish was that he was the brother of the very popular comedian and concert singer, Joan Turner, who died in 2009.

Much later serving as an assistant priest was “Fr.” Michael (Mick) Curtin.

As a young boy, it was my daily duty to rise early (5.30 am), stroll around to the church presbytery and knock on the front door. I would then stand back and look up at the bedroom windows. Depending on whose bedroom window slowly opened, I would know which priest would come down and open the church to prepare for the daily morning mass: “Be down in a minute, Pat,” was always the morning salutation to me.

To me, as a young boy, it was always a great personal pleasure to be able to assist in this most mystical rite of the Catholic church.

Later I would attend Catholic parochial schools and religious orders for my education. I can also say that never once was I sexually molested or approached. I should add that in those far away days I was good looking little boy. What you would see today bears no resemblance alas to that boy of the past.

I suspect that in hindsight we all look back to a golden past. Well maybe, but in my opinion, the Roman Catholic church was then at its peak. But I don’t think the hierarchy of this country knew or realized it, or that the clergy of this country had any idea that their church of which they were so proud, would be, in a generation, changed forever. The spiritual mortar that was the deposit of the faith was as firm as the weathered brick that had built St. Peter’s in Rome. Or so they thought!

On the spiritual Richter scale, the cataclysmic waves that emanated from Vatican II have yet to settle. With many middle-aged Catholics still nostalgic for those far away days of Pope Pius XII.

However by the early 1960s events in far away Rome, at the so-called ecumenical council (ecumenism was a new word to me and many others), were being heard about in England and of course in rustic Purely.

Through quality newspapers and weekly Catholic papers, events were being discussed and debated in Rome, that would, we were informed, bring the church into the 20th century. Well, that was the party line!

To most English Catholics, the recent election in America (1960) of the young senator from Massachusetts was far more exciting than what some elderly prelates in Rome (the modernises) were proposing for the church in defiance from their opposition (the progressives.) And hadn’t that young President in Washington said, “Ask not what your country can do for you, etc, etc?” So we, of course, asked what can we do for our church. Could someone please explain to us (the laity) what was occurring in the “eternal city?”

Because of this uncertainty, an organized event was arranged one evening, in the parish hall of the church, in the mid-1960s that brought out some thoughtful and provoking and heated discussions. And may I say some worries.

The meeting had been called by the Canon to discuss the many new documents that were being formulated and still in an embryonic stage at the Second Vatican Council, called by Pope John XXIII.

The parish hall was full (this was unusual.) What had brought people out for this wet evenings discussion, was the guest speaker from Archbishops House (in Southwark.) This high-ranking cleric, whose name escapes me, unfortunately, had been invited to talk to an interested but confused parish about events in far away Rome. But more importantly to explain to everyone how it would affect them and the parish.

His prepared talk, if I recall went rather something on these lines:

“We must be optimistic about the council that is now sitting in St. Peter’s. Yes, there might be some small changes, perhaps new prayers to be included and the introduction of some new hymns that you might not have heard before. This will give a newer, more spiritual emphasis to the liturgy (another new word), but this will be used very sparsely, so I don’t think there is cause for too much alarm in this parish, or in this diocese.”

Later another priest, in alluding to the ecumenical movement, would remind Catholics with a sly wink, “Anglicans always love hymns.”

His continued with more comforting words and that should have been the end of it, but sitting at the rear of the parish hall making detailed notes on what the speaker had said, was a member of the congregation, although I didn’t know him myself.

When he stood up to ask a question with an authoritative manner, it went something rather like this:

“I have listened very intently to what father has told us. However, my son is a journalist covering the Council in Rome and is accredited with the press briefings at the end of the numerous Councils meetings. His personal reading of the churches long-term plans is as follows. The Tridentine mass, in its present shape, will be discontinued and instead it will be said worldwide in the vernacular of each country. There will be, because of the new Anglican connection, a downplaying of the role of the Virgin Mary, also the rosary and the 40-hour devotions. This, it is hoped, will placate all other non-Catholic religions to follow into the unity movement. One popular debate will be on the role of priestly celibacy and its future (this would be withdrawn from the debate by Pope Paul VI.) Papal infallibility is to be looked at (it was looked at but that was all), and the role of collegiality – something on the line of the apostles in the early Catholic Church (this would bear no resemblance to the church in the acts of the apostles.) It is hoped that the defunct role of deacons (P.D.) will be activated. What were they? My son also sees an ongoing battle between the progressives and the traditionalists. This will increase as all future sessions go on. It is also felt that all future decisions must be ecumenically based. This will see a downgrading of the mass.”

(Later the chief architect of the liturgical reform, Archbishop Bugnini, honed the new mass (Novus Ordo) to less than 20 minutes. His censorship of the final Gospel of John is still missed by many of today’s Catholics.)

Reforms for all liturgies, the introduction of new hymns in the mass and an overhaul of the rubrics, vestments and the general role of confession etc, etc were brought in.

And with that unexpected bad news from Rome, he sat down to muted silence.

To say that everyone at that evening meeting was shocked is stating the obvious! But they were.

40 years on, so much of those dire predictions heard in Purely have arrived. With many still remaining an enigma.

Then of course, in those far off days, 71% of Catholics made what is called their Easter and Christmas duties.

Today perhaps less than 30% will bother. Will someone please tell me what is going on?

In retrospect, I suggest that it was all a planned silent revolution of the Catholic church. Planned with the full consent of the Pontiff.

Many willing and bribed prelates were instrumental in this plot devised some years ago by Adam Weishaupt, Illuminati ‘supremo.’

Certainly, the finger of suspicion must also be pointed at the German theologians.

In the years after Vatican II, it is written that approx 10,000 priests applied for laicization from their priestly vows. It is a staggering number and in fact, if this were middle management of Tesco’s, serious questions would be raised at the company’s annual AGM.

The question, as someone asked with tongue in cheek, as were the remaining clerics who remained, the best of the bunch or were the departing ones the tops of the clerical pops? Who knows!

In conclusion, some 40 years on, the Holy See has become the Holy Siege. Not so much from the practising laity, but rather from the clergy. Somehow they seem to have accepted secular humanism and attempted to graft it on the withering tree that is Vatican II.

I do contend, however, that this bitter struggle will continue, until the False Prophet enters the world’s stage (Rev. 13.)

That Masonic game plan, drawn up and prepared 40 years ago, was what motivated the so-called plotters. They could not in their wildest dreams thought it would all go so easily. And it did!

Today the so-called church that claims it was built upon a rock, is itself on the rocks!