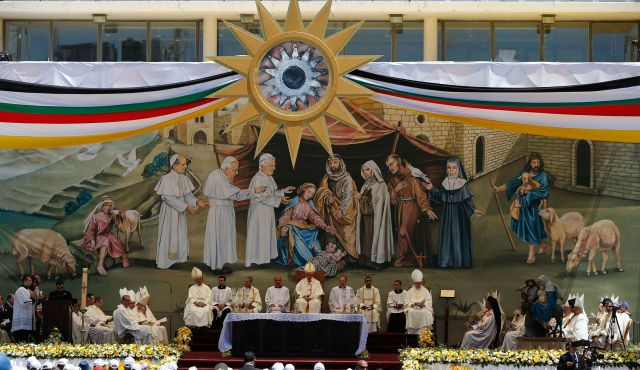 Late May saw the disgraceful Vatican PR caravan arrive in the Holy Land (at the exact time a minor earthquake struck Israel) with their desire, no doubt, to purchase and grab all it can in Israel and beyond, including the so-called Upper Room, famed for the Last Supper.

The Jesuit pope talks ‘supremely’ concerning the ‘state of Palestine’! What state? This is utter nonsense!

God bestowed this land to the Jews, not to the Irish, nor to the Spanish, and certainly not to the Arabs, but to the Jews. This is their heritage. Of course they too need to repent, as all unsaved sinners need to, but we should also remember that we are in end times, and the Lord is soon, hopefully, to return to this fallen world; and within one hour of His landing, the Vatican, the UN and all other hostile organisations and governments will be destroyed.

God will not be mocked, and the Roman church of Constantine performs a dangerous political game that will take them eventually to the gates of Hell; and all those who collaborate with them also. We can only hope and pray that many catholics won’t join these demonised clerics from the Vatican in a future terrible oblivion.