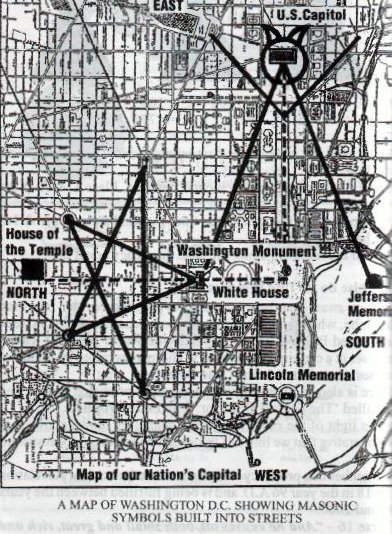 “When the Freemasons and occultists designed Washington D.C., they incorporated their Masonic symbols into the streets of the city…I showed this map to a leading Mason, who replied: ‘It must have happened by accident.’ Of interest is the fact that the goat’s horns fit into the two top areas of the pentagram, his face in the middle, his ears to the sides but please note where the beard stops-right at the White House, so ultimately, let’s face it, the President of the U.S.A. is spiritually affected from at least two areas of the occult world. Therefore, is it not reasonable to assume that the city of Washington D.C. is under a terrible Luciferian curse” (Barry R. Smith, Better Than Nostradamus, 1996, p. 68-71).
Whatever happened to separation of Church and State?