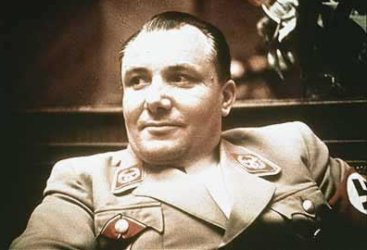 By all accounts, Martin Bormann (sometimes referred to as the “Brown Eminence”) should rightly have stood trial at Nuremberg with the other Nazi hierarchy, and then after the verdict was given, be led to the wooden scaffold and then hung. But he wasn’t.

Instead, for nearly thirty years, assorted sightings would surface that this one-time secretary to Hitler, was somehow still alive, and you could take your pick of any choice location in the world of just where he might be seen. (At one time Elvis and Bormann offered frequent sightings to enquiring journalists. Both men seemed to be everywhere but not that I am aware of ever together!)

And even today his death is still controversial in espionage circles.

Instead of near the Lehrter Bridge in 1972 in Berlin, his skeletal remains were finally unearthed. Perhaps a victim it seems of a stray Russian bullet?

Years later a DNA sample was collected from a relative. In 1998 this would certainly confirm that this was Martin Bormann’s scattered bones. Later they would be cremated and scattered into the Baltic sea. (I’ve read that his son Martin had also donated a sample, but this has yet to be confirmed).

Also according to his son: “He was a strict but loving man,” no such praise from his numerous enemies in the party. They saw him as a cruel manipulator, pitting friend against friend; they hated him but to Hitler, he would always enjoy his master’s complete support and trust.

“I know Bormann is brutal,” claimed Hitler dramatically when challenged on Bormann’s methods of persuasion. Albert Speer, Hitler’s favourite architect, once wrote: “Even among so many ruthless men, he stood out by his brutality and coarseness.”

SS boss Himmler affectionately called the man “Dear Martin.” However, near the approaching end in Berlin Hitler would appoint him the executor of his Will.

One personal statement described him as: “My most loyal party member, Martin Borman” (he may even have taken that Will in his getaway rucksack. Or arranged otherwise.) Some even claimed the Berghoff at Obersalzberg (Hitler’s then stunning mountain retreat) was state registered in Bormann’s own name. Very strange indeed. So how did this self-educated man reach the dizzy heights of Nazi power, only later plummet to the devastation in 1945?

Martin Ludwig Bormann was born in 1900, he would narrowly escape army service in the War and in the 1920s his aptitude as a bookkeeper would find him using this talent with local farmers in their numerous paperwork with the landowners.

He would be attracted like so many others seeking an answer to the countries pitiable plight that led him to the “Freikcorp.” Then acting as a local treasurer during this period, he would somehow be implicated in a murder trial and would serve a brief prison spell. (His friend in the trial Rudolph Hoess would later be the commandant at Auschwitz.)

Naturally, I suspect he would be eventually drawn to the Nazi party (he first met Hitler in 1926.) Then once a member of the party (60508) he became what is known as a “fix-it” man. Later at his wedding, Hitler would act as a witness. His wife Gerda Bormann it seems was more pro-nazi than he was. She later went on to produce ten children for the cause of the party. You even qualified for a “medal” for this sacrifice for the party.

In 1941 when the Rudolf Hess took his mysterious plane flight to Scotland the indispensable Bormann, through promotion, had now finally arrived in the arena of power. This was to be his domain until Hitler’s suicide.

He would religiously record Hitler’s dreary table talks for posterity. And he would make it his business never to be far from his master’s bidding.

We should further examine Bormann’s loathing of German religion or rather the Judo-Christian devotions. Amazingly inscribed on the nazi militarily belt buckle was the startling words: “Gott Mit uns or God with us.” But we have to state that the Nazi leadership were godless men by all accounts and by their deeds and words they will be judged accordingly. Perhaps some may even have repented at Nuremberg.

(Ironically one of Bormann’s mistresses seems to have been a “practising Christian,” and it should also be remembered that his son was once an ordained Catholic priest.)

To the Nazi disciples, the awaking of the Nordic race and its historical gods and religious themes were to completely replace the religion of Nazi Germany. (We never confuse Biblical Christianity with organized religion at this ministry.) Today much of this paganism has seeped into our own consumer society such as Autumn equinox, the Samhain/Halloween day of the dead, Yule observance and don’t forget Kris Kringle as well.

Nordic gods so beloved of Wagner operas would unite the Nazis against its traditional enemies, that of the Jews and many others. The Jews were for extermination, the gods were for eternity or so the Nazis hoped.

One example would be the removal of the Christmas celebrations. But then this was quietly reinstated during the War when events were going badly for the Reich. (Stalin did the same in 1941.) But in those pre-War days, Germans would look forward to the people’s celebration of the winter solstice with massive pagan night fires with fixed lights and gleaming bayonets. The Holy night would become Yuletide. (Does all of this sound familiar to you?) Nazi oaths repeated by thousands would be solemnly taken at night with fluttering swastika banners used for dramatic effect. And just look at the runes and SS flashes, another Nordic example so beloved of Himmler.

Now, how far Bormann supported all of this nonsense we cannot say. I suspect his own personal religion was simply his own self-promotion. Perhaps his loathing of the state church, be it Lutheran or Catholic had come from a slight against him delivered long ago as a young man. Who knows.

Ironically with the death of his wife Gerda in 1946, his young children would be placed in the guardianship of a Catholic priest. (A family friend or secret Nazi supporter we might suggest?) And how Martin Bormann would have stamped his jackboot in anger when his own son would be initiated into the Catholic church. Finally, we must also remember that the armed forces had Lutheran and Catholic chaplains serving in uniform and in dangerous war zones as well. One also has to wonder what human atrocities they witnessed and perhaps turned a blind eye to for the sake of duty.

(On a personal level I first began compiling a dossier on Martin Bormann in the mid-1960s, with the frequent visits for research to the “Weiner Library” in London. And my research continued until that file somehow disappeared in the late 1960s. To date it has never turned up.)

But by April 1945 it was all over (Bormann had even helped to dispose of his master’s corpse.) The Russians were fast approaching Berlin. Hitler was Kaput. Finally, we are informed that Martin Bormann’s last apparent words spoken quietly to his secretary were:  “Well then goodbye. There’s not much sense in it anymore…..” and with that, the brown eminence beat a hasty retreat from the crumbling burning Fuhrer bunker and into the waiting pages of history.

Update: ex-priest, 80-year-old Martin Bormann Jnr., has been accused of sexual abuse and molestation when a priest in Austria in the 1960s. We have highlighted the Austrian Catholic church in the past, especially cardinal Hans Groer. But for Bormann Jnr., the sins of the father do seem to keep coming out of the Nazi woodwork.

Update: In his 1996 book “OPJB” the author Christopher Creighton claims that Martin Bormann, whose Nazi party membership card number was 60508, was in 1945 spirited out of the debris of Berlin by British Naval Intelligence.  Then brought to Britain he would be given a new identity and offered changed facial features. Years later he would leave for Paraguay, where he died in 1959-later his remains would be brought back to Berlin where they would be “conveniently discovered” in 1972 and then confirmed by DNA sampling. How much of this book is fiction tied up with some non-fiction is difficult to say?  So we leave it for the reader to decide for oneself.