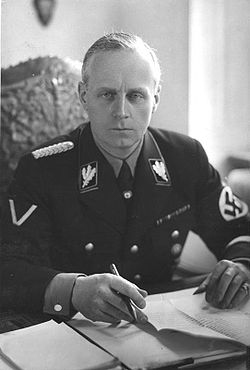 Joachim Von Ribbentrop (it seems he collected the Von from an adopted aunt) is still jokingly referred to as the “Krug” champagne salesman who made good, but was there more to him than this?

However, our own attention was drawn to Ribbentrop when reading Col. Andrus book The Infamous of Nuremberg. Certain remarks by the then Lutheran Chaplain rather suggested that Ribbentrop might just be saved.

Born again Christians will certainly know to what we refer to here.

Out of all the so-called Hitler henchmen, Ribbentrop always looks more like a jobbing actor who doesn’t understand why he is there. (Check him out on the patio at Berchtesgaden, sipping mint tea with Hitler on one of his home movies.) Yet on the European political stage, he certainly had a top-starring role, as he courted and shook hands with the then political elite of that day, like Stalin, Molotov, Mussolini, Franco (maybe) Churchill (maybe) Lloyd George, King Edward VIII and Mrs Simpson (it’s even claimed she had a possible affair with him.) Pope Pius XII (maybe) and possibly Charlie Chaplin. He shook all their offered hands. Even offering King George VI a stiff “Heil Hitler” salute as he presented his diplomatic credentials to the court of St. James’. (For some reason Ribbentrop had a deep loathing of the English but hoped eventually to retire to Cornwall after Nazi occupation of England. His hatred of the British Empire caused him great delight when Singapore easily fell in 1942. Hitler, it seems sadly remarked of this as a “defeat of the white race.”)

But in spite of his matinee looks he could still very easily condemn millions of Jews and others to annihilation, who opposed brutal Nazi ideology.

He once said rather chillingly:

“The Jews must either be annihilated or sent to a concentration camp there is no other possibility.”

Well, he certainly wasn’t ambiguous about this definitive order that was wired to his diplomatic ambassadors.

Joachim Von Ribbentrop was born in 1893 in Prussia, and like so many young men at the time, he drifted between jobs until he headed for Canada to try and make his fortune. Later working in banking and engineering.

This would help sharpen his skills in languages, especially French and English. (The two dialects at that time were the most important in foreign diplomacy).

Returning in 1914 he served in the army, being awarded an Iron Cross and making the acquaintance of another prominent Nazi, Franz Von Papen.

Marrying in 1919 to Anna the family would soon have five children and strangely like so many other Nazi wives, she was a staunch NSDAP supporter of Hitler.

Ribbentrop seems to have been introduced to the man he would later in the 1930s throw his political lot in with Adolph Hitler. Also, a late party member (number1199927) only signing up in 1932. This would gain him much derision from other Nazi members. Many came to loathe this ex-wine exporter.

Joseph Goebbels would write spitefully in his diaries about Ribbentrop as a “creep….a dud card….and a megalomaniac.” And so on. Of course, the diminutive doctor was none of these things was he?! But I think it does go some way in showing what a bitchy, winging, jealous crowd they were of each others success, and always trying it seems to get there Fuehrer’s ear.

With Hitler’s success in 1933 Ribbentrops friendship with Von Papen found him willingly acting as an important political intermediary in the slippery world of politics. This would later pave the way for Hitler to assume full power of Germany as Chancellor in 1933.

Hitler would often visit and relax at the Ribbentrops fancy Berlin home and because of this family friendship, he was to be appointed as Hitler’s roving ambassador from 1933-36. He travelled extensively and built up many contacts, which lead to him being named German Ambassador in London from 1936-38. I suspect during this era he would make the acquaintances of many devious men who were creating a New World Order, and not just for Europe.

However, we don’t intend to dwell too much on this pre-war period. By now Ribbentrop had come under the almost occultist spell of his Fuehrer: for him and the world there would be no going back. On the coming war, cloud horizon was the planned terrible “Final Solution” of the precious Jewish Race.

This would be forcibly implemented across Europe. But was Ribbentrop a willing supporter of it, or was he just acting a role given to him for that period in history?

Incidentally he like Keitel had misgivings about “Operation Barbarossa” (the planned invasion of the Soviet Union in 1941.) And hadn’t he been the very man who had previously signed the notorious pact in Moscow with Molotov and Stalin looking on jovially.

Through the war years, his political star began to plummet. His nerves seem to suffer and with a reliance on sleeping pills and other potions, he seems to have become paranoid about what was happening around him and of course how secure was his own powerful power base. (Apparently, there was a move to overthrow him within the party but Himmler, it seems, didn’t want to go along with it interesting)!

The unsuccessful bomb plot against Hitler in 1944 certainly shocked him and although he does not appear to have been involved in it or perhaps even known about it Hitler offered him the cold shoulder, possibly suspecting some of his ambassadors may have been involved in the doomed plot. Naturally, all of this personal drama was hardly beneficial to any one’s nervous system. Least of all Ribbentrop.

Later he reluctantly ordered the arrest of his brother in law, who may or may not have been implicated in the plot. He was later sent to a concentration camp. Ribbentrop, it seems settled his conscience by legally gaining custody of the two children of his brother in law. I have to wonder if Frau Ribbentrop went along with the arrest of her brother? Well most of these nazi women did seem to be Hitler’s most popular supporters in that world of evil nazism, didn’t they?

With the final and expected defeat of the Third Reich the rats jumped the sinking ship and headed for safety. Ribbentrop was later replaced as foreign minister by Seyss Inquart and Admiral Donitz (all three would later stand trial at Nuremberg).

For Ribbentrop, his destination would cease in Hamburg. And after trying to conceal his obvious identity he was meekly arrested hiding under the false name of Herr Reiser and along with assorted concealed thick rolls of money and an expensive engraved JVR “Longines” jewelled wristwatch. These it seems was all of his worldly possessions. (Today that watch remains locked in a safe of the author who unwittingly purchased it.) Also on him was a bizarre letter addressed to Vincent Churchill! All very strange.

Joachim Ribbentrop put his prison time to prime time to the study of his Holy Bible.

According to the prison Chaplain:

“He delighted in finding such parts of the Bible that spoke of forgiveness and the grace of heaven.”

And it’s been said many times that in that Book all will find salvation, if they truly seek it, we would add.

Ribbentrop before his fixed appointment with the rope informed the Chaplain that he had accepted Christ for the saving redemption of his soul.

Just a simple name and number but a sinner none the less, as we all are in the eyes of God.

But through the separation of sin, we are all denied lasting Salvation.

“But your iniquities have separated between you and your God, and your sins have hid his face from you, that he will not hear” (Is. 59:2).

Finally by his personal decision, perhaps in his cell, I believe Ribbentrop may have received Christ as his Saviour.

Christ is the light of the world. Through his late conversion, I believe Joachim Ribbentrop inherited some of that lasting light. That is a gift for all sinners.

Joachim Von Ribbentrop was the first to be hanged at 0:14 hours on 16th October 1946, in the gymnasium at Nuremberg.

According to one prominent historian:

“The hangman botched the execution and the rope throttled the former foreign minister for 20 minutes before he expired.”

All power perishes all eternity is eternal.

According to the late Victor Pearce, Mrs Ribbentrop was very antagonistic towards her husbands new found Christian faith. Apparently, she even threatened Pastor Gerecke about his spiritual influence over her husband.  Gerecke later claimed she was the most ungodly woman he had ever met. Ribbentrop before his death begged her to have the children baptised and brought up in the care and knowledge of Jesus Christ: amazingly she did. Gerecke may even have performed the baptism on them himself, however not sure about Mrs Ribbentrop.

Update: The recent film The Kings Speech seems to rather imply that Ambassador Ribbentrop affectionately known as “Rib” by his friends was having a romantic liaison with Mrs Simpson. This information was drip fed to the public by the FBI. It should also be remembered that MI5 had also compiled a black book on Mrs Simpson to be used later to discredit her reputation and morals. I believe Mrs Simpson was much maligned by the English establishment and elsewhere in trying to prevent her marriage to the future King and that had there been proof of this liaison, it would have surfaced by now.