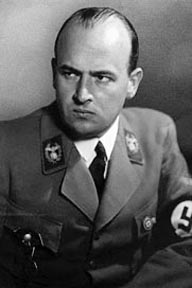 Hans Frank was one of the most contradictory Nazi criminals who stood trial at Nuremberg, Germany in 1945.

Always uncertain of how he should proceed in obeying his evil masters previous orders, Frank would after a restless nights sleep, do the dirty deed then write to Hitler boasting that “My Fuehrer I inform you today I have exterminated another 150,000 Poles.”

Apparently, he had lost an eye in a school fight, not sure if it was the left or right eye there seems to be some confusion about this.

Later in Nuremberg, he would confess to a prison doctor: “I am two people, the weak Frank and the other the Nazi. And one is always asking the other, ‘What have you done.'” 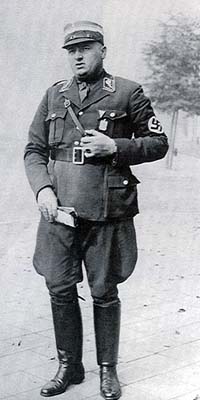 This sounds rather like a serious case of diagnosed schizophrenia.

And within his marriage, we are informed his wife Brigitte would dominate him through his chosen vocation.

As regards his religious background it’s still uncertain if he was born and baptised a Catholic. But interestingly in 1944 after the families return from Poland (her husband was the Nazi Governor general there), Brigitte Frank had the five Frank children baptized as Catholics. One has to ask why-and was she herself ever baptized? Certainly whilst in the military prison Frank I suspect rediscovered his discarded Catholic faith. Many men in such an enforced environment do just that and if nothing else prison does offer you the luxury of reflection.

Perhaps what Frank had inflicted upon a Catholic country (Poland) and against its defenceless people, had perhaps stung his dormant conscience. (But I have to ask can a Nazi ever have the luxury of a conscience?)

Later at his trial in Nuremberg, he would hand over incriminating personal diaries to his captors, which would naturally be used against him in court.

A verdict of guilty was brought against him by the Allied judges.

And perhaps by embracing his discarded Catholic faith in the last months of his life, he felt he might escape his share of the Nazi guilt of the crimes he allowed and authorised to happen. But it didn’t work. A price had to be paid. And he would do just that. Society expected no less. Punishment would be administered.

On October 16th Hans Frank was hanged at Nuremberg. His last words were: “My Jesus have mercy,” so reported a priest in a private letter to the Frank family written soon after the execution. Now this ministry, as has been noted before, supports no political creed or popular religious dogma. We’re not interested in any of it.

But mention has to be given to the spiritual choice that Hans Frank pursued, namely in hiding his Catholic roots.

Remember: “The wages of sin is death, but the gift of God is eternal life through Jesus Christ” (Rom. 6:23.)

We’re all sinners and we’re all going to die. No religion can remove your rebellion against God, because that’s what all committed sin is. And God will not be mocked. What Hans Frank needed (as we all do) is a Saviour, not a religion.

Once long ago God placed a mandate on Jesus Christ for all sins. Jesus was Himself sinless. But for us, He had to die on that cross so that through His redeeming resurrection He could promise in John 14:19: “Because I live, you will also live.”

For Frank, much of this spiritual awakening arrived in late for him-but what about you? And are you born again? (John 3:3-7.)

I found Stephan Lebert’s book My Father’s Keeper offered some excellent background of what the family of Hans Frank experienced after the war and in some ways still does today.