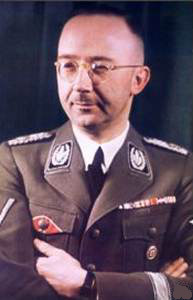 I suppose after Adolph Hitler, Heinrich Himmler (party number 14303) must be one of the most identified Nazis of that period. And yet he would never stand trial with others at Nuremberg for war crimes inflicted against millions of innocent war victims. Death, when it came to claim him, was from a secret cyanide capsule secreted in his mouth.

Strangely enough, the incident occurred in Germany where my late father was based as an intelligence officer in the British Army (BAOR.) In hindsight, I wish I had asked him if he had been there when British officers struggled with Himmler to retrieve the pill from his mouth of course they failed. And had he seen Himmler’s body as it lay exposed on the barrack room floor for the world press to photograph and others just to stare at? 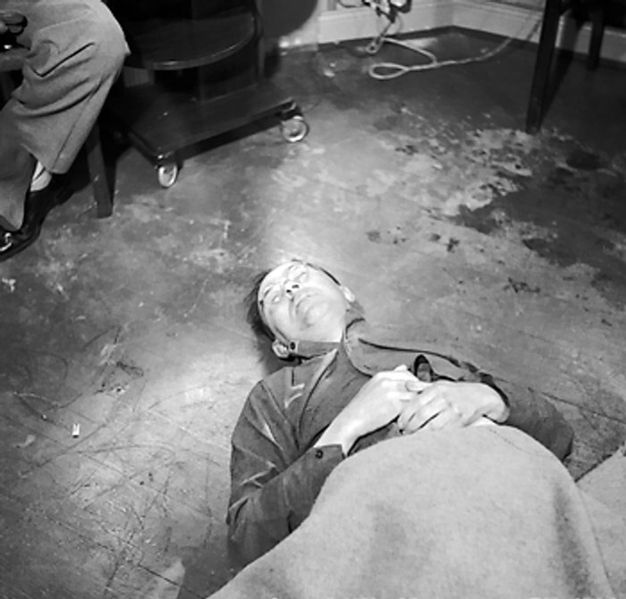 The Himmler family had always been devout and faithful Catholics, especially the young Heinrich whose participation in the mass was very much it seems a spiritual experience for him.

When he was nineteen years old he would confide in his diary: “Come what may. I shall always love God, shall pray to him and shall remain faithful to the Catholic Church and shall defend it even if I should be expelled from it.” (He was never excommunicated).

Later as a practising national socialist he would order the murder of priests, nuns, monks and others and later advocate the public execution of the pope. He also instructed a senior SS officer to furnish plans to kidnap the pope (neither happened of course).

Himmler certainly may have eventually displaced his religious devotion from Catholicism to National Socialism but he would certainly be influenced by the ritualism of that church. Stealing many obscure symbols and images from the Knights Templar and of course the Jesuits, as well as the royal Dragon court to the Knights of Malta to the Rosicrucian’s. Yes, Himmler was interested in all of them!

If he could, I believe, he would have recruited the Grand Master Jacques DeMolay of the Templar’s for service in the Waffen SS. And all of this for the glory of his dreaded SS troops in a world quickly preparing for war. And naturally to satisfy his own ego.

Mention should also be made of the dark occult practices initiated in the picturesque Wewelsburg Castle. 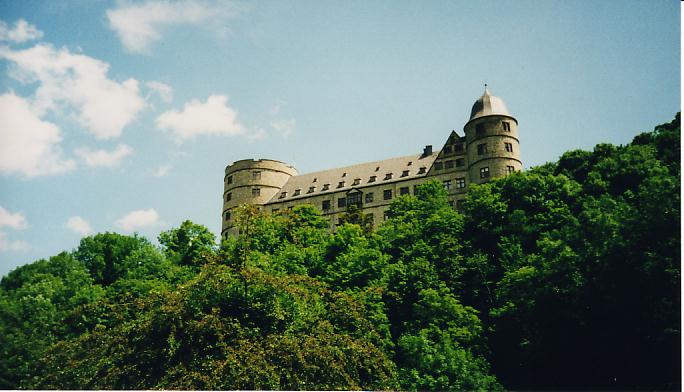 (One secret fan of all of this black magic and who just might have been present at some of the initiating ceremonies in the castle was Alistair Crowley. According to Heinz Hohne: “Himmler believed he had the power to call up spirits.” So who better than Crowley to willingly assist in such a diabolical seance!)

The ancient castle would be the ideal pageant for Himmler’s warped vision of a “Nazi centre of the universe.” With its 145-foot majestic dining hall. This splendid inner setting was enough for “the SS lord of the castle” to sit quietly alone and whisper: “Mine all mine.” And for a few short years, it was all his.

In the castles chambers, magical images would blend into Christian themes. Oaths would be taken. I suspect live sacrifices might just be initiated into the rituals. The historical round oak table of King Arthur would dominate the castles great hall for these knights of the SS to strut and scheme amongst themselves. But wasn’t it all just a crude presentation of the symbolism to Satanism that Himmler had perhaps always envied?

In 1940 both Hitler and Himmler journeyed to sunny Spain where they booked reservations at the swanky Ritz Hotel in Barcelona. 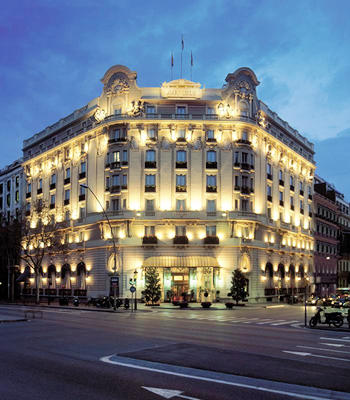 (Interestingly the hotel in announcing its many distinguished past guests that included Ava Gardner, Cary Grant, the Duke of Kent as well as Mikhail Gorbachev, yet for some reason, it fails to mention that Heinrich and Adolph slept there!)

Whilst in town Hitler had private talks with General Franco suggesting that his troops might like to come on over to the German side and fight. However the old fascist politely declined this once in a lifetime offer. I also suspect a Vatican envoy, perhaps the nuncio had also arrived bringing a letter from the pope for Hitler to analyse over peppermint tea and Viennese eclairs. Maybe even Himmler was involved before he would journey to the famous Montserrat Monastery to seek the possible location of the “holy grail.” 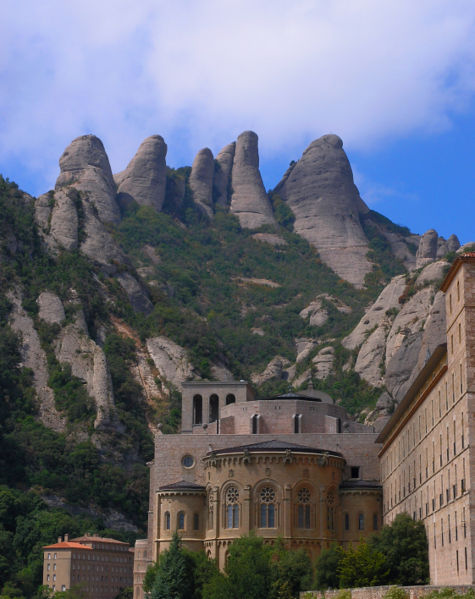 Hadn’t there long been a rumour that it was secretly located in the monasteries stonewalls. And didn’t Wagner use this myth in his opera “Parsifal” with dramatic effect? Himmler foolishly reasoned that if he could get his hands on the relic then supernatural powers would bless German soldiers fighting the allies. Sadly he would return to Berlin empty-handed and with persistent stomach cramps still continuing to dog his health. It has been suggested that this was some kind of repressed Catholic guilt. But I’m not sure about this diagnosis.

But at the tip of their lives, both Hitler and Himmler would die violent deaths. They would also critically ignore the Holy Bible’s stark warning in James 4:14, which states: “For what is your life? It is even a vapour that appeareth for a little time, and then vanish away.” Poignant words for us all to meditate upon!

Remember through God a saving Light came into a desperate and doomed world. And His name was Jesus who said: “I am the light of the world: he that followeth me shall not walk in darkness, but shall have the light of life” (John 8:12.)

Himmler and others like him chose to walk in the darkness of necromancy, magic, satanism and sin. For them, their fate was always sealed by these actions.

But where will your final destination be today? Will it be Heaven or Hell? The choice is yours.

Some important background came from The Order of the Deaths Head, by Heinz Hone.

And other assorted articles.

Letters and postcards from Himmler to his mother, posted from Paris and Norway in 1940, are expected to fetch £40,000 at an auction this week, if not more. Also included in the lot is his first communion certificate. (Himmler later converted from Catholicism to Nazi paganism.) Included in the batch is a telegram from Hitler, wishing Frau Himmler a happy 75th birthday. They are expected to be bought by a private collector.

Two books that suggest that perhaps Heinrich Himmler did not commit suicide in captivity in 1945 at Luneburg are Himmler’s Double by David Isherwood and The unlikely death of Heinrich Himmler by Dr. Hugh Thomas.

The writers present some interesting scenarios claiming that it was not indeed Himmler who bit on the poison pellet, but a certain Sgt. Heinrich Hitzinger of the field security police, the real Himmler having been removed from Germany at the request of Churchill by British Intelligence, and then offered a new identity, later living in England, until his death.

Interestingly newspaper reports from reliable sources at the time claim that Himmler was assassinated in Copenhagen, in the early years of the war. Also of interest is that the other German officers who accompanied the so-called “Himmler” or whoever he was until his arrest by British soldiers, they too were also interrogated, later by British Army Intelligence. The classified papers of what they reveal of those final days of Heinrich Himmler life are still sealed under the Official Secrets Act until 2045.

All very I strange but quite feasible, if indeed true.

The recent announcement that a trove of lost letters from Himmler to his wife, and found interestingly in Israel, just reveals what a fantasist he was, with most of them seemingly trivial to read, today. But what is more concerning is that some recent classified papers, released from the PRO at Kew for some reason, seem to suggest that Himmler did not die after swallowing a cyanide tablet as is generally accepted, but what is more concerning is that he was ‘beaten to death’ by British soldiers, under then military custody. If true and it seems it is then it is also a terrible indictment against the honourable name of the “BAOR” of which my late father served in. This mater should be fully investigated now by the MOD to either sustain or deny this happened at all at it seems “a specially prepared house” in Luneburg, Germany. And what of the shadowy role also of the British secret service in this matter. Were they there as helpers or advisors. Where do they come into this at all and under whose orders were they acting? It’s all very strange and answers are required.