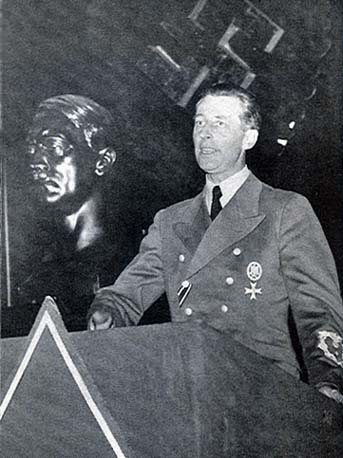 Hans Fritzsche was born in 1900 in Germany and as a young man, he served in the infantry during WWI.

During the 1920s he tried his hand at many trades until entering the field of journalism, but it was the dawn of a new phenomenon, sound radio.

The Nazis and especially Hitler took full advantage of this new medium and used it extensively in the general elections of those post-war years.

By 1932 he was promoted to news service in Germany and in the following Year 1933 Adolph Hitler became Chancellor of Germany and Hans Fritzsche sought membership the Nazi party.

For the next twelve years, Goebbels and Fritzsche would emphasis a deadly spin of words on Nazi Germany through the fabrication of their prepared lies.

And it was no coincidence that many cynical Berliners nicknamed the propaganda ministry as “The lie factory.” How true! Hans Fritzsche as Goebbels’ number two willing deputy would pedal anti-Semitic lies rather like an ice cream vendor offering different brands of his product, but it was all pure Jewish hate offered to anyone who would listen to a radio nearby.

On a personal level Fritzsche seems to have been a pet of the club-footed doctor because according to Fritzsche, he would later confess rather meekly: “He [Goebbles] had taken a liking to me.” Strangely enough, the Nazi architect Albert Speer would be another admirer of him. Speer wrote fondly of him that: “He was young, nice, and sensitive.” Seems these Nazis had a self-admiration society about each other’s looks.

But more important the Holy Bible reminds us that: “Ye shall know the truth and the truth shall set you free.” And did you know these wonderful saving words are set into the mosaic floor of the CIA headquarters in Washington?

Fritzsch’s wartime activity dealing in false words would send millions to commit unspeakable acts of cruelty against so many innocent people and many of those lies and half-truths still cohabit with us today. I found it rather amusing that both he and the Goebbels cowed in fear when Martin Bormann sent Nazi instructions from Hitler by telex to both men at the Ministry of Propaganda.

By 1945 Fritzsche would be captured by advancing Russian soldiers in Berlin, then be handed over the NKVD later the KGB. He would then be taken to the notorious Lubyanka prison in Moscow to be brutally interrogated by Stalin’s gangsters.

But then somehow the Allies were able to have him dispatched back to Nuremberg to stand trial with other prominent Nazis war criminals.

The argument by the prosecution was that because Goebbels had deliberately committed suicide in the bunker, Fritzsche, as a willing stooge of the deformed doctor, would now stand trial by almost by proxy. Surprisingly enough even some of the American prosecutors had doubts about this legal procedure and were sympathetic to Fritzsche. Amazing if you think about it!

Our attention is now drawn to the late Dr Victor Pearce who reminds us in his book that twenty-two of the defendants (and this included Hans Fritzsche) were now in the spiritual care of a Lutheran army Chaplin named Pastor Gerecke, whilst in prison during their trial.

Gerecke’s spiritual task was bearing so much fruit that when the pastor hoped to return home to America after an absence of two years for a vacation, the accused men were deeply worried about this. Amazingly all twenty-two men signed a beautiful letter penned to the pastor’s wife, imploring her to, “Please leave him with us.” The letter was composed naturally by Hans Fritsche then posted. I wonder where that letter is today

Years later the army pastor reported that he considered many of the men he had ministered to had truly repented of their sins, admitted their guilt and were indeed saved. We can only hope that he was correct in this assumption.

At his trial, Fritzsche claimed he was misled about German policy and was exploited by Goebbels and Hitler. I find this statement from him amazing to read even now.

At the trial’s conclusion, Hans Fritzsche along with Franz Von Papen and Dr Hjalmar Schacht was acquitted and were later released from custody. (Both these men are featured in this series.)

However, Hans Fritzsche would later be arrested by a German denazification court. This tribunal seemed to be less tolerant than the previous trial Fritzsche had attended, because he would later be found guilty and sentenced to ten years hard labour and with a loss of pension rights. Fritzsche would use this jail time to compose his memoirs and I also hope he put time aside to study and read his Bible daily.

He would serve only half the allotted prison sentence and then be released on health grounds. Hans Fritzsche, Goebbles loyal deputy, died of cancer in Cologne in 1951.

In conclusion, the cruel uses of wicked words against another can be devastating and unforgiving.

A lie is fashioned in the mind then formed into words harmfully spewed from the mouth to damage or injure a person’s reputation. This is never acceptable.

Hans Fritzsche could benefit a great deal from these blessed words had he once listened to this command.