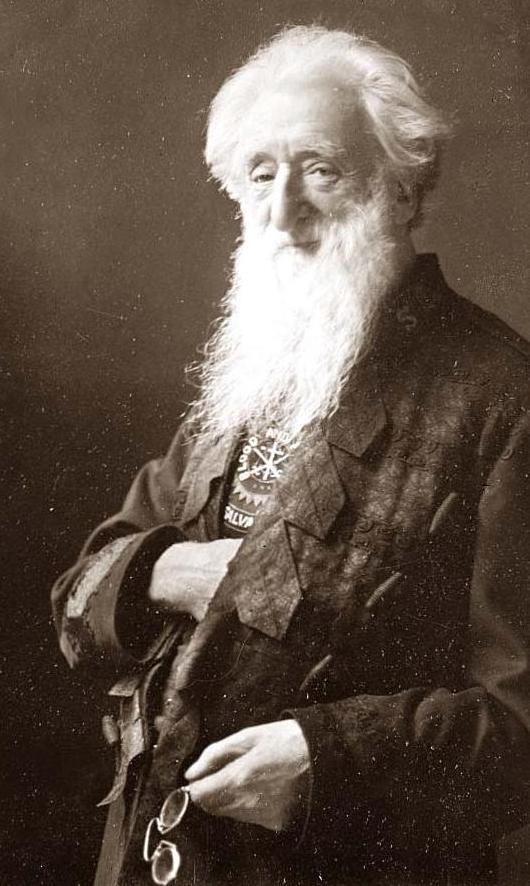 Any appraisal of the lasting Booth legacy must include his private “army” and the role of his wife. In fact, I suggest that the two were interchangeable because one could not have survived without the other’s existence or dedication.

In some ways, Booth was just one of the many itinerant preachers that tracked the length of England in the 19th century, proclaiming, “Repent. Reject sin. Seek salvation.” Where are these bold and unashamed Bible-believing men today?, I ask, perhaps in desperation, but never in despair.

William Booth was born in 1829 and came from an apparently non-religious family, as frequently occurred among many of the evangelists of the past, with many others arriving from that secular background as well.

I suggest there were two momentous moments in his long life, the first being when he married Catherine, and the second when the Salvation Army evolved from the Christian Mission, then London-based, into a marching and well-disciplined military unit. The troops were now on the march onward and upward, truly a populous movement to see and hear.

In 1879 the first edition of the “War Cry” was published. Today, that newspaper is still seen and sold in public houses, but I’m not sure if the “General” would have approved of this. Without his wife’s support and persistence in encouraging Booth, I suspect he probably would have thrown in the evangelical towel. Yet Catherine also wanted a name for herself as a prominent preacher in her own right, of course. Indeed, she insisted on it and it seems with her husband’s consent, frequently travelling much of England with him and her young family.

What do they say, “Behind every good man is a good woman”! However, Scripture knows nothing of female preachers!

Catherine did not seem to be anyway subservient to her husband either, but rather saw her mission in the Army and its march against alcohol and prostitution in Victorian England as a joint Christian commitment between the two of them. Certainly, social reforms were needed then and still are, of course, today but this is a social/political issue, and not for the born-again Christian to take up or pursue. Our joy and satisfaction will be presented to us in the coming New Jerusalem.

She also abhorred any medical vaccinations, seeing them as suspicious and dangerous; well, I certainly agree with her on the dangers of the syringe.

William Booth was a man with a declared mission, as he explained it, to bring the word of God to an uncaring and blasphemous England, rather like today of course. And his army had to march in army formation i.e. with citadels, military ranks, and marked military dress uniforms, and polished boots of course. I’m not sure what this has to do with the Bible; it all sounds rather like a Roman legion to me.

Yet he was a preacher with a purpose who, it seems, knew no fear or failure, but most importantly he understood and demanded that people learn and listen that sin always corrupts a person’s soul (not original sin, of course), and that Hell with all of its torments is an unsaved sinner’s fate if that man or woman ignored his Biblical words. So, was it the fire-and-brimstone message which he thundered at the masses that resulted in so many sinners being saved? Well, yes, if you like, and it seems to have worked successfully, with many seeking salvation from the Lord. Yet, it’s something you won’t hear or learn today from the comfortable smug establishment church pulpits occupied by under-worked and overpaid socialist vicars who know nothing of the plan of salvation, and don’t seem to care either way, being simply intent on spreading Marxism as proscribed in the communist manifesto through the ecumenical and interfaith cliques.

In fact, only this month, the Anglican bishops have drawn up their own political manifesto and presented it to the Government, so the radicalisation goes on from Canterbury to a disillusioned electorate.

Yet through Booth’s own personal efforts, many were indeed saved (as I have mentioned) and did renounce the sin and debauchery that abounded in the depravity of Victorian England. And by the way, Booth was no Calvinist! He always mocked this intellectual religious debate, as had John Wesley before him. “Rubbish,” he shouted, as he journeyed throughout England in all types of weather, climates and conditions, and with his wife and children many times in tow.

The Booth heritage would enter the 20th century as an established family business with Booth’s eldest son succeeding in the role of the “General” after his father’s death. There is, of course, nothing original about this idea because many American mega-churches are today controlled and moneyed by their own family dynasty connections.

Yet, Booth did continually and bravely preach on the streets, and outside the liquor and gambling taverns and establishments; indeed anywhere or any town where he could be heard or seen or listened to. Of course, in the process, he would suffer many physical injuries not only to himself but, I suspect, also to his travelling family. In fact, no spare hours were wasted by him, ever. But it should also be remembered that the horrific sexual scandals that assaulted the Catholic and other churches over the decade have also had victims in the “Army” as well. In fact, as I write this, in the Scottish courts’ serious historical rape allegations are being laid against a senior officer by four women, so the usual clergy of the established church are all threads of the tapestry of this fallen world.

Today, we have long proposed in this ministry that the saving word of salvation will rarely be discovered or preached in the cloistered church aisles – no way – but rather in the streets and highways where sinners unknown to a church or congregational system cluster, because they are the souls that have to be reached and convicted to repent, and repent quickly. Time is scarce in everyone’s lives, expiring in seconds rather like a drifting vapour that appears and then disappears like a will o’ the wisp.

In Booth’s day, the slogan from the mission houses was “soap, soup, salvation.” Today we still recognize their sincere efforts and any calamity that assaults this world, whether earthquakes, terrorist attacks or frequent transportation disasters, will see the “Army” there. One can always expect to see their uniformed officers dispensing tea and sympathy, but are they (I must ask) urging all that they meet and minister to of the coming judgment that will be unleashed against the unsaved? Would not Booth have continually shouted this warning himself?!?

Tragically, the “Army” today is nothing more than post-millennial glorified social workers. In fact, it should also be stated for the record how they were the first “church” to join the Jesuit-orchestrated ecumenical movement back in the 1960s.

In 1860 Booth was everywhere, from the depressing east end of London to the minefields of Wales and the smelting plants in northeast England. Apparently, it was impossible on a Friday night (payday) for drinkers to enter a public house (pub) without being urged to accept one of his tracts. His many soldiers who, it seems, occupied every street corner were there to say no! No doubt, Booth was a faithful and persistent evangelist whose mission was to bring the word of God to a hostile Sodom and Gomorrah Britain of his day, and for this, he must be forever saluted.

Sadly, the “Army” has since cloaked itself rather eagerly and smugly in the false Roman message of ecumenism. It is, I believe, a betrayal of all that Booth stood for and he certainly was no admirer or promoter of the false church of Rome. It is an affront to his memory and mission because: “Blessed are ye when men shall revile and persecute you.” And he knew all about that.

Now, few or none will revile or persecute the “Army” in promoting its safe watered-down message. I do not believe, therefore, that those past and brave victorious soul-winning Christian soldiers who marched proudly to Booth’s drumbeat would give the time of day to today’s compromising crowd, who all too happily and willingly stumble along to the deadly drumbeat of ecumenism.

I’m indebted also to brother Miguel for bringing to our attention the strange and bizarre meanings of the adopted logo that the Army is so proud of. I’m also puzzled by the posed studio portraits of Booth that always seem to show him in a familiar masonic pose with his right hand concealed in his jacket. Was he pursuing this masonic ideology – albeit covertly – or was there some other meaning in the portraits?

As for the “Army’s” red logo shield, it features five upturned crowns and a writhing snake (is this the antichrist perhaps?) seen grotesquely wrapped around the cross, and with many other unexplained esoteric evidence in the displayed symbols on offer. It is rather difficult to explain them away to my satisfaction anyway.

Also of interest to me was the very generous and rather unexpected donation of £1,000 to Booth from the powerful and infamous Lord Rothschild. (Today the value would be around £100,000). Of course, we have to wonder why, because men like Rothschild rarely do something unless it is for their own personal benefit. 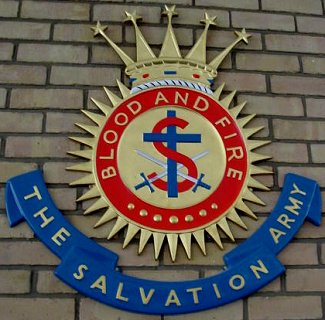 Another area which alarms this ministry is not only their feeble policy towards the all-powerful LGBT movement, and long-term association with Freemasonry, but of course, their continued yoking with the Catholic church, as can be seen here. One can only wonder what Booth would have made of all of this! 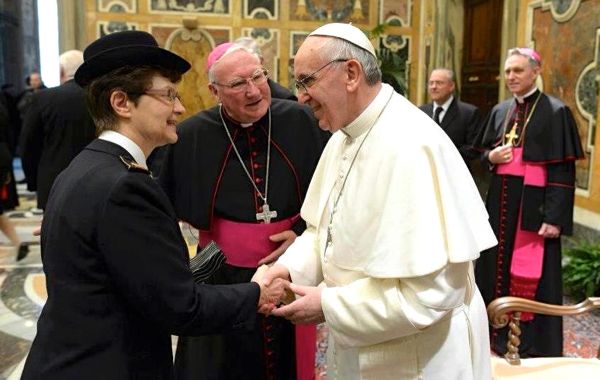 It should not be forgotten how Booth was cruelly despised over his long life by the Anglicans, the Methodists, and the Catholics, and of course the establishment as well, along with the very wealthy and influential beer barons. But he never flinched or failed from his mission to win lost Hell-bound sinners to the Lord Jesus Christ.

Today, that marching army of “Blood and Fire” that he led so successfully and with conviction for so long has sadly evolved into social outreach, with some weak, watered-down religious input offered. What an insult to his name and the reputation of his past troops! Now it is no longer a serving army, but a humanist social club that colludes with the Vatican and others.

Booth died in 1912. The Army high command then, strangely enough, requested that he be interred in Westminster Abbey, of all places. The Dean “politely” declined this. Instead, Booth was finally buried with his wife Catherine in the London borough of Hackney where years before he had fought some of his greatest battles against the devil, drink, and debauchery in the winning of souls for the Lord. A fitting choice for the Booths to be laid to rest, finally together. Of course, today we are now in the prophesied last days. If you’re unsaved, you are simply and sadly forever lost. But always remember: “Believe on the Lord Jesus Christ, and thou shalt be saved” (Acts 16:31). “Him that cometh to me I will in no wise cast out” (John 6:37).

What are you waiting for?

“It is appointed unto men once to die, but after this the judgment.” (Hebrews 9:27)