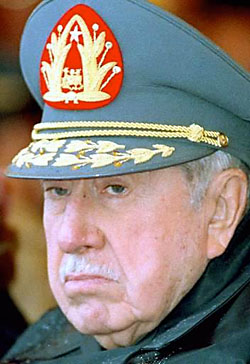 The death this week of General Pinochet cannot be allowed to pass without an examination of his working relationship with the Catholic church.

The late general always claimed that a Marxist/Jesuit agenda was being launched against his country. And he had to prevent it, whatever the human cost.

He had after all initiated the coup against the democratically elected freemason, President Salvador Allende in 1973, with the help and connivance of the CIA to save Chileans from a Cuban style political experiment, this he would claim in the cause of “national security.”

One of the numerous organizations the general detested was “The Christians for Socialism” movement. Coincidently one of its leaders was the Jesuit, Gonzalo Arroyo.

He claimed that: “The Christian faith can and must become more and more at home in a socialist option.”

Very left wing stuff! Soon after this, Mr. Arroyo was expelled in 1973 for publishing such a puerile statement.

Certainly, many priests, monks, nuns and others were arrested, tortured and murdered during the post period of the coup in 1973. Certainly, the legal investigations should continue into their murders. We at Ex-Catholics for Christ suggest the time is now appropriate in discovering where many of the bodies have been buried for over 30 years. Not least of all for the many families still grieving for their loss. This must continue to be a priority.

Yet later, who was appointed as the Vatican’s nuncio in Chile in 1978-1988, but Archbishop Angelo Sodano. And it seems he and the general got along famously, with it seems, cosy tennis matches at one of Santiago’s swish tennis clubs. Later when Sodano became the powerful Secretary of State in the Vatican, he was able to smooth the way for a papal visit in 1988 for his boss, John Paul II. At a special high mass in the cathedral at the time, the pope personally gave communion to the kneeling general. Many were sickened by this act shown on public television. Human rights groups especially. 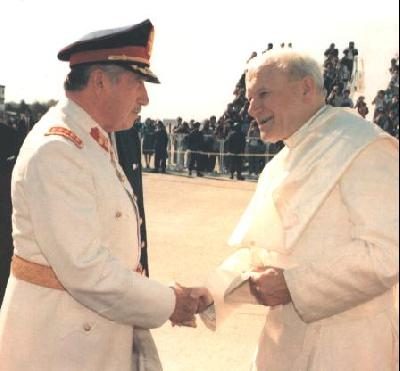 Later when relations with the Vatican cooled an olive branch was offered to the general’s government from the Methodist-Pentecostal church alliance of all people. It seems the general was able to work with them so much so that he visited their church for the annual religious “Te Deum.”

Later with the general’s sudden arrest in London, who would privately call for his immediate release on “humanitarian reasons” and a return home, yes, the Vatican. Thankfully the Home Secretary at the time, Jack Straw, refused such an insensitive request.

Last week the general received the prescribed last rites of his church. Death was but days away it seems. My question has to be: did he express repentance for the numerous crimes his government brutally inflicted upon a defenceless innocent people – such horrific acts as bricking up men and women alive in walls to die slowly of suffocation and thirst?

Recently both James and I saw something of this cruel treatment when we visited Sachsenhausen Concentration Camp in Germany. There it was a favourite sport for sadistic SS men. As I suspect it was with the Chilean secret police (DINA), and trained by the STASI no doubt.

But I suggest unless the general repented and received Christ’s order in John 3:3-7 then the lake of fire will be the final destination for him (and many others in the same boat!) Not only because of the hideous crimes that he allowed to happen, and yes he will be judged for those acts, but because he did not repent (as far as we know) and call on the Saviour for forgiveness.

In conclusion, it will be interesting to see how the Chilean church handles the funeral arrangements of the general next week.

A new movie called Pinochet has caused ructions and riots at its premiere in Santiago last week. Demonstrators and pro-Pinochet protestors clashed with riot police at its screening.

Over 4,000 people disappeared or were murdered during the military coup, organized by the general and the CIA in 1973.

One supporter said: “Chile has to start a new maturity phase.” However, the Chilean wound of those years runs deep and will continue to do so.

But the Holy Bible reminds us: “And he said, The things which are impossible with men are possible with God” (Luke 18:27).

So it seems the healing process in Chile still has a long way to go as the showing of this new film proves.