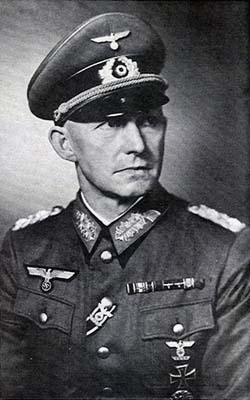 In October 1941 General Jodal would boast rather arrogantly about the sudden attack on Russia by the German army stating that: “We have finally and without any exaggeration won the war.” How wrong he was in that false prediction and then just five years later almost to the day he would be hanging from an end of a rope in Nuremberg prison as a common war criminal.

Before the execution, when the expected death sentence was handed down from the court to be “death by hanging,” it came as quite a shock to Jodal that it was to be by this means. Quickly he with Herman Goering requested death by a simple firing squad. It was, of course, denied to both condemned men. He also requested a particular burial place for his body, but it was refused.

So how had it come to this that General Alfred Jodal, head of the German OKW (High Command of the armed forces), would be swinging at the end of a rope, just like a common criminal? Simply because Alfred Jodl had been found guilty of serious international war crimes: these being executions and deportations, then serious charges brought by the allies that would stick to his name and tarnish his lasting military reputation forever.

Alfred Jodl was born in 1890 and seems to have been destined to become a soldier journeying from army officer cadets to war service on the Western front. At that brutal wars cessation, he had been wounded in the thigh and collected a coveted Iron Cross.

During the 1920s he would gain promotion in the scaled post-war German army. Some commentators have suggested he first made Hitler’s acquaintance in 1923. Others claim 1939 but I suspect the former date is more accurate. Hitler was then courting all the generals’ support and later in the early1930s against the expanding SA of Ernst Rohm. Alfred Jodl would certainly have been one of them who would see this dangerous threat against the army he served by the upstart SA organized by Capt Rohm.

Around about this time a rumour began to circulate (not sure who started it-maybe Canaris or Heydrich), that Alfred Jodl was “tainted” with Jewish blood however this wasn’t confirmed. He must have willingly joined the Nazi part and or whatever reason because later in a studio portrait, he is seen wearing a gold party badge pinned to his uniform. This was awarded to long-serving party members it seems.

Jodl’s personal fortunes seem to run parallel with the rise of the Nazi party and certainly with the fall of most of Europe to the Nazi hoards in the early 1940s, but never England although Jodl was convinced Britannia would fold. He wrote, “The final German victory over England is now only a question of time.” Just another prediction that Alfie got very wrong!)

In Norway and Denmark under his planning, it was a very different scenario that witnessed an attack on an unprepared country, sustained later with heavy carpet-bombing of Rotterdam, with German troops advancing into Norway. Greece and Yugoslavia were also on his drawing board of invasions. And always remember that wherever the conquering German army arrived the Gestapo and SS death units would be arriving soon after for the round up of Jews and dissidents, then classed as “dangerous” to the State. I suspect Alfred Jodl was aware of these terrible truths and what happened and of the committed atrocities that occurred during the war. Perhaps he was able to stifle his conscience if indeed he even had one concerning these mass killings.

During the planned invasion of Russia and along with his sidekick Field Marshal Keitel, he would be photographed many times usually peering over Hitler’s shoulder-often seen in the war conference rooms in the “wolfs lair” or “werewolf.”

Surprisingly Hitler was accused by some officers to have been influenced by some of General Jodl’s suggestions and tactics. Well maybe this is true or not but his familiarity with Hitler would see him despised by others of that class of men who blamed him and Keitel for prolonging a lost and doomed war, especially on the eastern front.

A recent historian has claimed that nearly four million men perished in the Russian campaign, either by the bullet, infected wounds, the unpredictable weather, or starvation. Both Jodal and the assorted chiefs of staff, who kept the whole performance running knowing it was lost, must accept some of the blame for these personal tragedies. Another document that he willingly signed in 1942 would allow arrested soldiers, some civilians and army commandos to be executed rather than being treated as POWs. This evidence would be produced at Nuremberg against General Jodl and with deadly results.

Of Alfred Jodl’s facial features the historian Charles Whitting wrote: “Of this cunning, pasty-faced advisor” and later his prominent features would find his guards at Nuremberg laughingly refer to him as the “Happy Hooligan.” This was apparently after a then-popular American comic book character.

Albert Speer remembered that: “Jodl rarely contradicted Hitler openly. He proceeded diplomatically.” But it seems, “Hitler could always depend upon the unquestioning support from Keitel and Jodal in the Supreme Command of the Wehrmacht.” These, of course, were the idyllic days of the Russian offensive. This would later turn hostile against Field Marshall Von Paulus and his tragic sixth army. One can only speculate how Keitel and Jodl could sleep at nights at the waste of the flower of German youth sent to their death by the High Command of the army.

At the failed bomb plot on Hitler’s life in July of 1944 Jodl suffered light head injuries in the explosion. Because of this, he would later receive a “special wounded medal” from Hitler. This must be one of the last gongs he received from anyone.

With the wars final end, Jodl would play one last starring role on the world’s stage. He would sign for Admiral Doenitz the declaration of Germany’s total surrender on 7th May 1945 at Reims. Strangely enough, this staged act would be recreated again in the Russian sector. Mainly I suspect for the purpose of Russian propaganda for the filming of this humiliation. After this, he would arrive in the Mondorf holding area of the allies. Later he would join the other Nazis soon to stand trial in Nuremberg. Then once processed into the system the prison psychiatrist would score him with an IQ of 127. He would also (grudgingly) admit that he had hated Hitler but felt compelled to obey orders.

Why had he not sworn a personal oath to Hitler all those years ago? Now sitting alone in the court, “On the witness stand he remains well roomed and his uniform is immaculately pressed,” it is noted. So once a soldier always a soldier it seems whatever the occasion. (“But we are all as an unclean thing….as filthy rags” Isaiah 64:6.) This should remind us of how God views us and our actions. Fashion is also worthless in His eyes. Instead, seek redemption.

Robert Jackson, the controversial American prosecutor, found the General: “Introverted and deep, also a betrayer of his military profession.” Jodl naturally denied many of the grave charges against him. When he heard them read by the prosecution he later quickly exclaimed: “The indictment knocked me on the head. First of all, I had no idea at all of about 90% of the accusations!” He would naturally deny all the charges concerning his wartime activities. (When newsreel film of the concentration camps was shown to the defendants, Jodl we are told, looked away, careful to hide his emotions.) I have to suggest only then he must have known what the court’s verdict would be against him. Yet no apology was coming from this Bavarian soldier. No shame on his part in what had happened under Hitler’s Manic rule of Germany.

Later he would decline all offered pastoral assistance from Chaplain Gerecke or seek any other counselling. Instead, he would escape into the world of his own secular books that he had been permitted to bring in to the prison.

One sad story perhaps sums up the General’s self demeanour.

It seems that in his cell was a picture of a young woman holding a child, asked by someone about its importance he replied that it was his own mother holding him, then sighing he remarked: “It’s too bad I didn’t die then. Look how much grief I would have been spared, frankly, I don’t know why I lived anyway.” This man was clearly lost for eternity yet we are promised: “Him that cometh to me I will in no wise cast out.”

Then much later we are informed: “The words of the interpreter echoed through the cold night ‘Tod durch den Strang.'” (Death by the rope.) Slowly General Alfred Jodl entered the death chamber. Wetting his lips. His face was as dry as parchment and drawn. His waiting was now over. Let the punishment begin it is said. A glimpse of the supreme judgment yet to arrive I have to suggest.

General Jodl was hanged on 16th October 1946. His last words were, “I greet you my Germany……” Legend has it that it took 14 minutes for him to die whether by the rope or on the gymnasium floor after being taken down is not known. This I suggest remains a terrible indictment on the American executioner and his amateur methods. Later the official photos taken of his body reveal the evidence on his bruised and bloodied face.

In conclusion, Alfred Jodl rejected God’s gift of eternal life. He was but one of many who will sadly continue to fall into this dangerous diversion.

“It is appointed unto men once to die after this the judgment.”

WARNING: Many generals and others will conspire with the coming Antichrist in preparing a ferocious attack upon the Holy City, Jerusalem. This assault may well be under a United Nations resolution/mandate. The terrible firepower prepared by the military planners against Israel is rather like what Jodl and Keitel willingly performed for Hitler’s ambitions. Their aggression will ultimately fail. Jerusalem will never be annihilated. Then those soldiers and mercenaries who delighted in doing this will then accompany the antichrist into the waiting fires to sample their own destruction. “Depart from me ye cursed into everlasting fire” (Matthew 25:41.)

The Infamous of Nuremberg: Col Andrus

Inside the Third Reich: Albert Speer