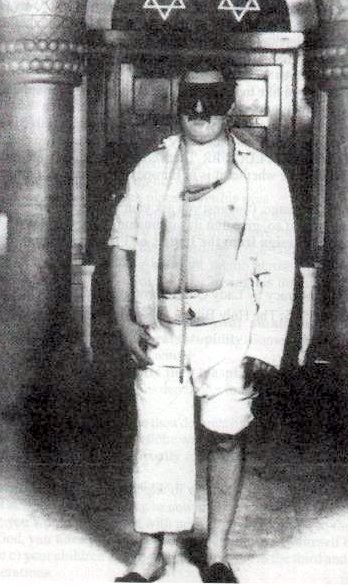 (How would you feel if this were your son,
brother, father or husband, during their secret initiation into the Masonic lodge?)

One thing is quite certain: there is no absolute truth outside of the Holy Bible. As far as we are concerned, this material is quite plausible and perhaps even probable. But we would certainly encourage you the reader to do further research.

The patriarch of the Rothschild banking family once said: “Give me control over a nation’s economy, and I care not who writes the laws.”

God would also say: “The love of money is the root of all evil?”

So who’s side are you rooting for now?

We would also like to add, that those in the conspiracy community are divided on certain aspects of the New World Order, so common sense and an open mind is needed to decipher the following information.

They created the theory of evolution, atheism, communism, anarchism and socialism; and they mock people who have bought into it by making a living from it.

An interesting and very rare quote from the Catholic church: “We [the Illuminati] have spread the spirit of revolt and false liberalism among the nations of the Gentiles so as to persuade them away from their faith and even make them ashamed of professing the precepts of their Religion and obeying the Commandments of their Church. We have brought many of them to boast of being atheists, and more than that, to glory in being descendants of the ape! We have given them new theories, impossible of realisation, such as Communism, Anarchism, and Socialism, which are now serving our purpose…The stupid Gentiles have accepted them with the greatest enthusiasm, without realising that those theories are ours and that they constitute our most powerful instruments against themselves” (The Catholic Gazette, Feb. 1936).

King Edward VIII, the Duke of Windsor, King George VI and Prince Michael of Kent, were each 33rd Degree Masons. The historian, and former freemason, Andrew Roberts correctly remarked, that when King Edward VIII abdicated, he used a Masonic handshake to say goodbye to his brother, George.

The following extracts are taken from Masonic literature: “So then, because our ancient brethren-‘the old sun-worshippers’-met on the highest hills to worship Baal or the sun-god, and freemasonry being that same worship revived, it must necessarily follow, that Masonic lodges must be held in the highest rooms of buildings, to carry out the coincidence” (The Master’s Carpet, Edmond Ronayne, p. 247.)  “Masonry has nothing whatsoever to do with the bible, that it is not founded on the bible, for if it were it would not be masonry, it would be something else” (Digest of Masonic Law, p. 207-209.)

“Whether you swear or take God’s name in vain, don’t matter so much. Of course, the name Lord Jesus Christ, as you know, don’t amount to anything, but Mah-hah-bone – o, horror! You must never, on any account, speak that awful name aloud. That would be a most heinous crime….un-masonic -unpardonable” (The Masonic Handbook, p.184.)

“When a brother reveals any of our great secrets; whenever, for instance, he tells anything about Boaz, or Tubalcain, or Jachin or that awful Mah-hah-bone, or even whenever a minister prays in the name of Christ in any of our assemblies, you must always hold yourself in readiness, if called upon, to cut his throat from ear to ear, pull out his tongue by the roots and bury his body at the bottom of some lake or pond” (The Masonic Handbook, p. 74.)

The Illuminati succeeded in destroying nations patriotism, currency and faith.

Groups that were used to do this were Hollywood, feminism, civil rights movement, governments and others.

The American Civil Liberty Union not only had the Bible removed from schools, but they are also credited for assisting the American Nazi Party and spoke out for a teacher, who wanted to teach evolution (Encyclopaedia Americana, Grolier International, Inc., 1980, p. 680-681.)

Members of the Illuminati often meet in Masonic Lodges.

The United Nations is the Illuminati’s Head Office. And it cost John D. Rockefeller 18 million as a “gift” to the UN to purchase this 18-acre real estate (The World Book Encyclopaedia, Vol. 20, p. 24.)

President George Washington wrote the following about his satisfaction of the Illuminati: “It is not my intention to doubt that the doctrine of the Illuminati and the principles of Jacobinism had not spread to the United States. On the contrary, no one is more satisfied of this fact than I am” (Fourth Reich of the Rich, Griffin.)

European and British bankers financed Trotsky, Lenin and Stalin, before, during and after the Russian Revolution. (Lenin used to be known as Vladimir Ilyich Ulyanov.)

“After being thrown out of France and Spain, Leon Trotsky and his family arrived in New York aboard the streamer Monserrat on January 13, 1917. Although he was never known to have a job, the Trotsky’s lived in a fashionable apartment and travelled around in a chauffeured limousine. Trotsky left New York aboard the S.S. Kristianiafjord bound for Petrograd to organize the Bolshevik phase of the Russian Revolution. When the ship docked at Halifax, Nova Scotia, on April 3, 1917, the Trotsky party was detained by Canadian authorities under instructions received by the British Admiralty in London. Within hours, great pressure was brought to bear on Canadian authorities by high officials in both Washington and London to [release them]…recently declassified by the Canadian government, reveal that the authorities knew that Trotsky’s group were ‘Socialists’ leaving (American) for the purpose of starting [a] revolution against the present Russian government. History must never forget that Woodrow Wilson, despite the efforts of the British police, made it possible for Leon Trotsky to enter Russia with an American passport” (Wall Street and the Bolshevik, Anthony G. Sutton, pgs. 25-28.)

Communism and Socialism were pretty much the same and were only able to succeed, due to ‘outside help,’ from London, Paris and New York.

Karl Marx was a correspondence and political analyst for Horace Greeley, owner of the New York Times. In 1849 both Horace Greeley and Clinton Roosevelt financially assisted the Communist league in London, in the publication of the Communist Manifesto. There are two cheques made payable to Marx by Nathan Rothschild, which can be seen on display at the British Museum in London (William Josiah Sutton, The Illuminati 666, pg. 201.)

They sacrifice human beings, even children (this is condemned in Jer. 32:35) and some members even become addicted to drinking their victim’s blood (Al Gore allegedly being one of them.)

JFK, like Tony Blair, made his pilgrim trip to the pyramids to worship the ‘gods.’

The world’s mass sophisticated telecommunications are used by Satan to keep up with his world system.

The pope of Freemasonry, Albert Pike and leader of the Illuminati in the US, announced that three world wars would be needed to implement the new world order. Albert Pike also belonged to a Luciferian group known as Palladist:

“The latter group, with which we are mainly concerned, was known under the alternative names of Luciferians and Palladists. They were said to adore Lucifer, the equal of Adonai, Jahweh. He was in their view ‘the God of Light,’ the good principle, while Adonai was ‘the God of darkness,’ the evil principle.

In short, he was Satan himself. This worship was founded on a dualistic philosophy and was a sort of topsy-turvy Christianity.

The name of Palladist is derived from a palladium which they were said to revere, namely the Baphomet, or grotesque idol, the worship of which was one of the articles of accusations against the “Knights Templars” in the 14th century.

It was alleged that the Baphomet was preserved in secret through nearly five centuries after the suppression of the order and ultimately carried by one Isaac Long in 1801, together with the skull of the last Grand Master, the unhappy Jacques du Molay, from Paris to Charleston in the United States of America.

These relics were averred to have there become the sacred objects of a society, which was a development of Freemasonry. The head of the society, we are told, was one Albert Pike, under whose influence it spread all over the civilised world” (Encyclopaedia of Religion and Ethics, Vol. 12, p. 204.)