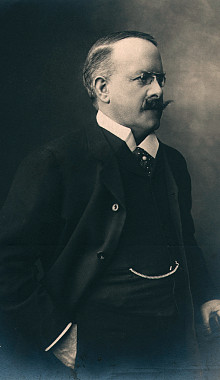 Credit, where credit is due, is always promoted by some apologists and perhaps rather grudgingly, of course, that “the man is nothing, but the work is everything.” There are still lingering doubts, however, about Thomas John Barnardo (mainly concerning his life and achievements) even today, 110 years after his death at age 60. From Stepney to Surbiton, it is important to understand and attempt to evaluate the life of TJB as he was affectionately known by his colleagues.

Barnardo’s lasting reputation rests with the needed homes he initiated in the 1800s, primarily for homeless and destitute children. The formation of their ongoing welfare still continues to this day, of course, although the emphasis is now on compassion rather than the Christian beliefs espoused and insisted on by the founder.

Barnardo himself was no novice to Christianity and its teachings. After all, his late stepmother had been a practising open brethren follower, and some of those tenets that she practised seemed to have originated with her been parented by her and later promoted by Barnardo in Dublin. It should be remembered also that there were very few brethren stapled onto the theological totem pole in Catholic southern Ireland in those days, or even now in that post-Catholic country of today.

Barnardo seems to have experienced an awakening of his faith in his mid-teens and to be fired up with this zeal. He would later learn in London about waiting for mission fields in China, as presented by Hudson Taylor. Naturally, he wanted to go to convert the heathen in far-away China, but something in his personality seems to have made Taylor cautious about his suitability, and instead, he suggested that the young Barnardo complete his education by becoming a medical doctor. (They had a surplus of preachers already in China but few doctors on the ground, a reasonable point, I suggest. However, I’m not sure the young Barnardo agreed with this.)

Barnardo took Taylor’s sound advice (I suspect reluctantly) and finally enrolled at the London Hospital Medical College in 1866 and he started his medical studies, perhaps with some trepidation.

As with all students, the first priority is to secure living accommodation, and so it was at Coburn Street, in east London, that a Mrs Parsons became Barnardo’s landlady. Somehow, later on, nasty rumours began to circulate of some form of impropriety between the pair. A divorce from the lady’s husband fuelled the rumours even more. It may just have been a platonic friendship, after all, between Mrs Parsons and the young Barnardo. She may even later have become a housemother at one of the various homes to the children. (The same unfortunate rumour also arose concerning a landlady/tenant relationship between C. S. Lewis and his landlady).

When Barnardo began his medical studies in 1866 at the London Hospital Medical College – albeit reluctantly -, his lasting memorial was advancing successfully for him not in the hospital wards, but rather in the notorious back streets of London, where hundreds of children survived alone and as forgotten outcasts. Barnardo was shocked by what he saw and heard. From then on, his medical studies went into decline, perhaps as his dream of establishing children’s homes developed.

During this time in his young life, Barnardo took to street preaching with a passion, something much deplored and ridiculed by his medical colleagues, much to their shame.

A weapon used by his ‘clergy critics’ is that Barnardo never completed or finalised his medical studies, nor did he earn the title of doctor. Serious allegations, of course, that would haunt him in the following years of his fame. Part of this problem was fuelled by his frequent use of signing legal documents with the use of ‘Doctor,’ a dangerous gesture when he had not earned this title. He was later awarded a degree from Edinburgh University, but interestingly was never licensed to practice medicine, it seems.

The “Jack the Ripper” suspicion of Barnardo (a suspicion briefly entertained by the police) raises some interesting facts for sleuths of this case, even today.

There were, in fact, six known doctors under the microscope of the police investigation, and Barnardo was of interest primarily because he had known Elizabeth Stride, the supposed third victim of the Ripper, and spoken to her only a day before she died. In fact, Barnardo was later asked to accompany the police to the city morgue to identify her body. She was subsequently buried in a pauper’s grave in east London. Few attended, and I’m not sure if Barnardo attended or paid for the service at the grave. Barnardo had visited Elizabeth a few days before her murder and found her very frightened of something or someone. Did she confide in him of her fears, or did she know the true identity of the Ripper? We may never know either way. Some days later, Barnardo composed a letter to the London Times concerning this visit. Perhaps an unusual gesture to make, considering the circumstances and his reputation. I find it interesting, as well, that he seems to have acquired the nickname somewhere along the way of “Barney-do” in and around that district that he knew so well. Was this a pet nickname that he was called in and around the area?

Certainly, some of the girls’ emaciated bodies had had major organs removed and quite skilfully, apparently. This, of course, suggested to the police a professional medical hand in the brutal surgery inflicted on the women. Naturally, the world that doctors inhabited then in the east end of London was a small tight-knit group. Barnardo probably knew most of them by name, maybe even socially as well. He may even have known the Ripper’s identity or had his own suspicions about who the assassin might be. But it seems there were other tragic victims apart from the five murders, leading to the suggestion of several rippers who terrorised London in the 1880s. The mystery still lingers on even today and may never be solved satisfactorily for an interested public. And as the years go by, the list of suspects rises to the level of almost being ridiculous.

A whiff of corruption later surfaced in the alleged misappropriation of funds and donations to Barnardo’s popular charity, then settled rather uneasily on his shoulders and his growing reputation. Maybe this is why no honours or recognition ever arrived through his front door from Queen Victoria’s Government.

Barnardo was also a paid preacher in offering the word of the Lord to the fallen world of his day. I’m not sure I agree with this, and usually, these pulpit preachers insist on many other luxurious and selfish conditions before they graciously accept the invite. All wrong. “Go out into the highways” born-again Christians are commanded to do, at all cost, and at all times.

The concern must also be attached to his Christian personality when he foolishly accepted a membership offer to join the Shadwell Masonic Lodge in 1889 at age 45. What on earth made him do this? And what was he thinking of? As a supposed Bible believer, why in the world would he want to be associated with the dubious practices of any lodge that insisted on secret handshakes and blasphemous oaths for membership?!?

Well, I suggest that perhaps on a personal level his friendship with Sir Henry Wellcome − a millionaire entrepreneur and influential freemason himself, and the future husband of Barnardo’s daughter Syrie − may also have been an important factor in why he even considered joining such an antichrist society. In view of his brethren/evangelical background, it all seems rather strange and disappointing. But as someone once said, “The heart has its reasons.” Somehow, the blasphemy and corruption of the lodge he entered must have appealed to Barnardo (perhaps his earlier Biblical background was thrown out of the window like dishwater?). This oath-swearing in the lodge contrasts sharply with what is proclaimed in Deut. 5.11: “Thou shalt not take the name of the LORD thy God in vain.” This is a stern warning that all Freemasons should heed or face the justified judgment that is coming one day (maybe soon!) that none can or will escape.

Obviously, the ‘doctor’ from Dublin did not heed any of this. Whatever reason he might have offered remains unknown. Nor is it known if there were any tensions within his faith. I’m intrigued by the fact that he admired such men as Rousseau and Thomas Paine, amongst others, simply because these men were certainly no friends of Christianity and frequently promoted open hostility to it through humanism and open derision. Very strange bedfellows indeed!

Barnardo would later court unwanted controversy regarding his decision to export children to Canada and other British colonies from 1883 to 1906, and perhaps later as well. Many would be dispatched into working slavery on farms and in factories far from families and friends, with little or no salvation for their young souls to hope for or to seek. Very sad and still an open sore on the society’s history, even today.

Clearly, Hudson Taylor had seen something lacking in the young man who wished so fervently to convert the heathen in China. Perhaps it was vanity that filled his ego of self-importance, or perhaps he just wanted to always get his own way and be noticed. Determination can be a dangerous thing, and an autocrat like Barnardo sadly treated any suggestions to improve his homes with disdain and anger.

However, in conclusion, the Barnardo institution has saved thousands of children over the last century, and today still rescues many from social deprivation, depression, and death.

Sadly, the institution’s founder would now find little trace of the previous Christian ethics (or “underpinnings”) that he had known and encouraged so much. They have long been absent from the agenda he insisted on in the daily running of the children’s homes in his day.

Throughout the country, the homes still operate in a kindly manner consistent with the ecumenical social reform rather suited to today’s world of sexuality, strife, and sin. Over the years, I have spoken to many who had lived in and were brought up in Barnardo homes from an early age. They all spoke highly and with genuine affection of the concern of the many housemothers and fathers who guided them through their younger difficult years and into adulthood, and this is to be commended.

Barnardo and his legacy remain not in the man or his mistakes, but in what he did and accomplished in creating the homes that still bear his name in 2015 (although interestingly the ‘doctor’ prefix has long been removed from their charitable masthead).

When watching an early newsreel of the hearse at his funeral in 1906, I was struck by the images of over 20 clergy in cassock and stoles that reverently followed the coffin to Barkingside, where he was to be interred below a rather ostentatious grave marker in the forecourt of the children’s homes. Was this his own personal choice? Even then, in Barnardo’s world, he had become ecumenical in his acceptance of other religious faiths, grudgingly or not, with their apostate teachings.

I must take my hat off as a sign of respect for what the man achieved through philanthropy and reform of social ills over four decades of that era. These efforts were certainly needed and desired by the suffering children. More importantly, however, I must firmly place my hat back on my head in view of his compromise and betrayal of his Christian roots. The reason he pursued this dangerous decision is now between his conscience and God.

Remember: we will all have to give a personal testimony to God of past words, deeds, and actions: “Therefore…prepare to meet thy God” (Amos 4:12).

Life is short indeed, but eternity is forever.

“It is appointed unto men once to die, but after this the judgment” (Hebrews 9:27).