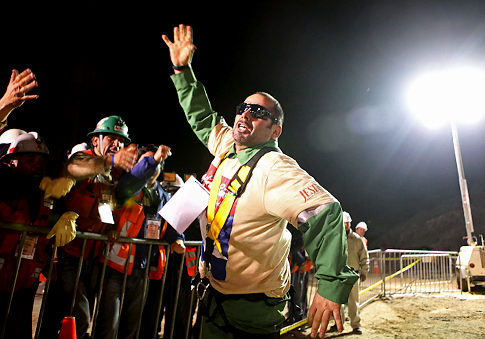 (A Chilean miner celebrates his freedom wearing a Jesus t-shirt)

As of writing this, I am watching rolling live news coverage (along with an estimated 1 billion people) of the amazing rescue operation to free 33 miners, half a mile under the earth!

Most of the men that have been trapped for 69 days are a mixture of Catholics and Protestants. It was wonderful therefore to see some of these men with Scripture verses on their t-shirts, and one having JESUS plastered on his arm. Talk about wearing your heart on your sleeve. Literally.

There was also an elderly woman and younger man playing guitars and singing praises to God for their deliverance. In fact, many of the relatives have been openly praising God for weeks now. This is true religion in play. Excuse the pun, but God gets all the glory from those that are actually His.

However, such public displays of faith and affection would not have been seen in the UK, had an event as awful as this occurred. (When 9/11 happened, US churches saw a sharp increase in church attendance. When 7/7 occurred, there was no report of church attendance increasing, only the pubs doing a roaring trade).

One of the many horrors and fears these men must have lived with, while trapped in pitch black in their underground dungeons for the first few days, were screaming, crying and shouting, not to mention grown men soiling themselves. (One of the miners ran six miles a day just to ward off feelings of anxiety).

Out of the 33-trapped men, at least one of the miners, Jose Henriquez is a committed Christian who conducted daily Bible studies, with a total of 20 men participating. Two men, previous unsaved, made professions of faith.

Dear unsaved reader, Hell will be like this, but there is no rescue operation launched by anyone to release the wicked dead.

As I type this million, probably billions of men and women, are in Hell right now burning. Some have been there for thousands of years. Their location is in the earth but much further down. This being the first death of course.

There will never be any amnesty for them, with thousands more dying every day, without ever repenting and coming to faith in Jesus.

One million years from now, God will not announce a cessation to their physical and emotional torture. They died in their sins, without Christ (their choice) and because God is eternal, with man being made in His image, therefore His creation will live forever too!

Harrowing truths such as this led some of the greatest Christian men and women to travel the globe (sometimes at their own financial cost) with the everlasting gospel, to win many souls to Christ. Scores of these brave soldiers were martyred by those that hated God’s call to repentance, and such went straight into glory.

With the world’s media beaming live pictures around the globe, proves we are living in the last days (see Rev. 11:8-14), and therefore time is short, very short. Repent today!

This event thousands of miles away in Chile has had a very happy ending. God no doubt spared these men’s lives. Many of them were not (and are not) saved prior to their 69 days of torment and despair, but due to the prayers of some of the saved miners and others around the globe, God intervened and blessed the men and equipment that came to save them.

Jesus launched His own rescue mission over two thousand years ago when He paid for the sins of the world. By His substitutionary death, burial and resurrection, He conquered death and made away for mankind’s sins to be forever forgiven.

Have you thanked Him for this? Have you personally cried out to receive it? If not, you are lost and need to be saved. 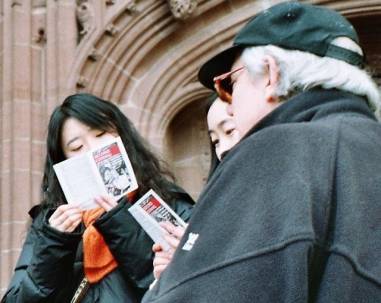 As you know from past articles, our distributions were halted at one of our local hospital prayer rooms some months ago, but most times things go smoothly, well almost.

A few days ago as I walked through my local bus station towards a bus stop (I always leave a few tracts on seats for commuters to pick up later and read) things however are changing, as I performed the usual distribution and noticed out of the corner of my eye, a man in reflective yellow jacket running around the closed station and down towards me!

He paused for breath, I waited for him to speak when he said between gasps: “Could…..I ask you not to leave this….printed material….here. It is not allowed on private property.”

I then conversed in a friendly way with him, almost apologising that he had to rebuke me for leaving the tracts in the station. The usual red tape I suppose or let one person do it then everyone else will. But after a few words and no hard feelings, I left but not before he took the offending tract from where I had placed it and walked off with it in his pocket. I just hope he got to read it that night. But it was all very friendly I must say.

But the point is if you try to distribute Bible tracts in a so-called “private area” (even though members of the public use it) just be careful. And I’m not sure in hindsight that a bus station falls into this domain. 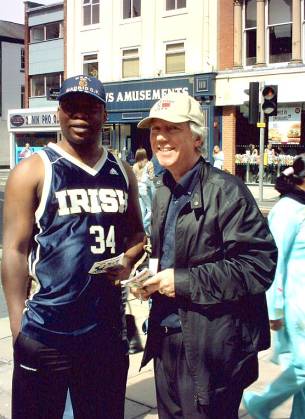 I found myself in a damp rainy city giving out tracts to the busy lunchtime crowd. They were all taken quite enthusiastically I have to report.

The first conversation we had was with Solomon, perhaps from South Africa. He took two tracts, in fact, one from both of us and informed us he was born again. We then expressed our pleasure at this. He had been giving out free newspapers up to then but tucking them under his arm he explained that the world was in such a mess and it depressed him, so we talked to him about the coming of the Lord and I think as we left after some minutes in conversation we had been able to encourage him to stay strong in the Lord.

Later I had the opportunity to converse with a young man, perhaps in his mid-30s (he had previously talked to one of the other brothers who visits the town to witness and hand out tracts.) He showed me what he had been given and I noticed his concern was simply of why a loving God sends people to eternal damnation in Hell. I quietly explained that it is we who send ourself’s on this one-way trip to damnation by the rejection of the Saviour and our own selfishness, but I said the good news is the terrors of Hell will never concern or bother him if he repents and becomes born again. If he declines this free gift then he is lost.

He struggled to assimilate this so I simplified things by saying that he should not get too worried about all the other lost souls delegated to Hell. Because their own time was past and gone. Now was his time to pause-search his conscience and willingly believe on the Lord. The wonderful thing is I said, “That you will never be separated from the saving Lord. You are His forever.” He then perked up, shook my hand, smiled and disappeared into the crowd. I hoped I had made some light of his concerns. I sometimes think the saving message that James and I preach will never be heard anywhere else, except on the streets, and certainly not in any false religious binding system.

Later I did some street preaching and then departed for home, after a busy and rewarding outreach.

What’s In The News

As Keith Richards from The Rolling Stones launches his autobiography, the old Stone joked that he was ready to meet Lucifer-well however not just yet. Seems to me The Rolling Stones sold out Satanically with their LP Sympathy For The Devil, over 40 years ago. Oh and don’t forget their 1967 demonic fest Their Satanic Majesties Request. Seems these boys couldn’t get enough of Lucifer and his false promises (Prov. 8:3).

This month/year would have been John Lennon’s 70th birthday. Yet whenever I think of the former Beatle, who once had the world at his feet, the following banal comment he made in an interview, is forever with me: “Christianity will go. It will vanish and shrink. I needn’t argue about that. I’m right, and I will be proved right. We [the Beatles] are more popular than Jesus now” (St. LouisGlobe-Democrat, 5th Aug, 1966). Then fourteen years later, he was gunned down on the streets of New York, by a Manchurian style assassin. Oh, how the mighty fall (2 Sam. 1:19b).

Moving on to the dreaded Halloween soon to descend on us, the Catholic hierarchy of bishops in the UK, has asked children to dress up as “saints” or in other words, just forget the witches, vampires and demons, but I have to ask aren’t they much too late with this useless idea, and in fact I would say that these bishops ought to be worrying where they are going to spend eternity, instead of worrying about kids knocking on people’s doors begging (2 Cor. 6:14-18).

Mary MacKillop, the Australian mystic nun now named a “saint,” was briefly excommunicated for exposing amazingly sex-abusing priests. She went back into her church (WHY?) and instead promoted good works in the Catholic system. None of this, as we keep saying will save you. And if it doesn’t offer eternal bliss in the New Jerusalem, what’s the point of doing it? You’re simply just deluding yourself and others (2 Thess. 2:7-13).

With the Deputy Prime Minister, Nick Clegg and the former Foreign Secretary, David Miliband, now both sending their children to private Anglican and Catholic schools, one wonders why both of these self confessed atheists, would want their children to be given “religious educations,” when they spend so much of their Parliamentary time, undermining Christianity in the UK and subsequently persecuting Christians in their everyday life (Ps. 12:8).

And if either of the above “churches” were really Christian, they would openly rebuke these hypocritical politicians and not permit their children to be educated in their institutions (Mark 6:18).

The same is true of Tony Blair. This man not only introduced same sex-marriage and constantly voted for fetal craniotomy, but also, along with his “Presbyterian” colleague, Gordon Brown, practically brought Britain to bankruptcy (Prov. 29:12).

It really should be quite simple to any Bible student that the churches of Rome and Canterbury are not historically or legitimately Christian (2 Tim. 2:15).