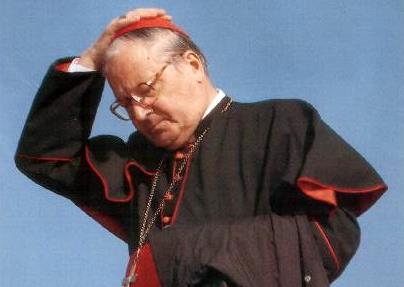 Both priests today would be called ‘career diplomats,’ and each would serve in the Vatican Secretariat of State.

Established in 1487 this ecclesiastical administration has continued to influence religious/political decisions by the Vatican. Today over 163 countries have diplomatic relations with the so-called ‘Holy See.’

One past luminary of the position of Secretary of State was Cardinal Pacelli. He served under Pius XI from 1930-1939. And whilst in the job, he would draft the infamous 1933 “Reichskonkordat” with the Nazis. (“After this Catholic critics fell silent,” writes Catholic writer John Cornwell, when being named Pope in 1939.)

He would from 1944-1952 act as his own Secretary of State. And why not if you can hold down two jobs! (But doubling up, as assistant Secretaries of State, were Mgrs. Montini and Tardini. Montini would later become Pope Paul VI.)

In 1979 Cardinal Casaroli replaced the Frenchman Jean Villot as Secretary of State (Villot had been named in 1976 as a member of the shadowy Masonic/P2 Lodge.) One traditional Catholic writer states how Casaroli (code name Casa) was officially initiated into this secret society on Sep. 28th 1957.

I do wonder what the name of the society was?) Casaroli would go on to serve four popes faithfully and be remembered as, “A savvy diplomat” by American politicians who had worked with him.

But he would primarily be remembered as initiating the controversial “Vatican Ostpolitik” policy with the then hostile communist countries. From 1963 he journeyed to Moscow, Prague, Budapest and Warsaw. This would earn him the dubious title of “The reddest of Cardinals and not just his robes.”

And it is claimed all of Pope Paul’s incoming mail before it reached him passed through Casaroli’s diplomatic hands.)

Cardinal Mindzsenty did not approve entirely of Casaroli’s political motives. And apparently, the two met for a private talk/briefing in the American Embassy in Budapest, in it seems of all things, a large soundproof plastic box that was hoisted to the ceiling on pulleys by the U.S. Marines! Very strange behaviour.

In 1974 Casaroli was the first Vatican senior diplomat to visit Cuba.

He would later arrange the historic Russian excursion to the Vatican by Mikhail Gorbachev.

There the Pope it seems distributed pearl rosaries to Mr and Mrs Gorbachev and accompanying entourage. And I didn’t know they were Catholics!

(Gorbachev surprisingly claimed in an interview that: “Nature is my god.” This from a Darwin/Marxist at that! And many suggested that Nostradamus and his reference to “Michael the Marked” were in fact, Gorby! 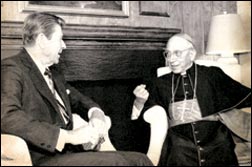 In retirement with his pet canary-named perhaps “Casa” the Cardinal completed his memoirs Martyrdom of Patience. (Yet even in retirement it seems from the picture below that he is lecturing the poor bird in the finer points of diplomacy.) 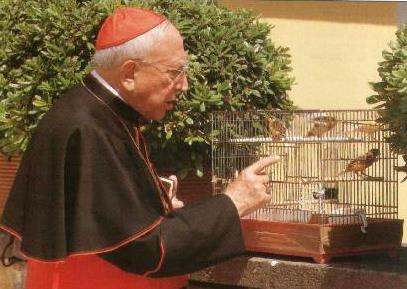 The mystical “Our Lady of the Roses” Catholic religious sect would blast him by proclaiming in 1974:

“Antonio Casaroli, you shall condemn yourself to Hell.”

He died in 1990 of respiratory causes.

In 2006 it was “Sunset Boulevard” for the 79-year-old Angelo Sodano when the new Pope accepted his letter of resignation.

After fifteen years toiling in the job it was now time to remove his official Secretary of State ceremonial ring and maybe compose his memoirs. Perhaps in those future pages, he might reveal the third secret of Fatima, or maybe how poor Calvi came to be suspended from Blackfriars Bridge in London and what about the strange death of Pope John Paul I.

Another mystery never fully explained was that of the crazed Swiss Guard shooting in the Vatican some years ago. Now, what was all that about? 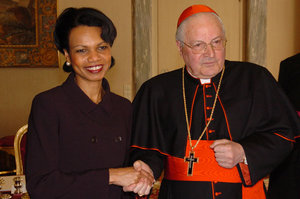 (Two Secretaries of State but which one is born again?)

And what about that “troublesome priest” Hans Kung S.J, who received warm praise from Sodano when he remarked on “his beautiful pages.” This from a prominent Catholic theologian who denies the divinity of Jesus Christ doubts some of the Gospel parables and the resurrection. He even dangerously for him doubts the historical founding of the Roman Catholic church now in my day that was a hanging crime from any critic-especially a doctor of the church.

But even the new Pope, some months after his election as Benedict XVI, invited his old German pal to Castle Gandolfo for cappuccino and cinnamon rolls on a quiet afternoon-very strange behaviour I suggest.

But I suspect that Angelo Sodano would like to have crowned his diplomatic vocation with an auspicious negotiation with Israel to purchase the “Cenacle of Jerusalem” or as its better known as the “Upper Room” where the last supper of Christ and His disciples was witnessed.

We at this ministry would warn against this ever happening.

Some years ago my son James and I visited Capernaum, the earthly habitat of Jesus and His disciples (Matt. 4:13.) We were offended to discover that the Vatican had somehow purchased this town, brick by brick, a century ago!

To me, this is rather like the Polish Government or any other country hoping to procure Winston Churchill’s underground War Rooms in Whitehall! (And no disrespect to Poland.)

So were these men two of a kind?

Well each of them in their own manner promoted the power and pillars of the Catholic church and always hoping to gain new principalities for its survival. Yet it will be destroyed as predicted in Rev. 17:15-16. Heavy stuff I suggest!

And did not Jesus predict in Matt. 24:35: “Heaven and Earth shall pass away, but my words will not pass away.”

I take this to mean all Governments, Principalities, Secret Societies and all false churches!

So, for Casaroli it is all now too late.

Yet for Angelo Sodano, each new morning offers him the choice to repent. Remember:

And for you? Well, the choice is yours. As it was for these two men. Two of a kind.

In 2010 Mehmet Ali Agca strangely claimed to the press, that cardinal Cassaroli had been the instigator behind the assassination attempt of the Pope John Paul II. He had also suggested previously in 2006, that pope Benedict would be killed if he took the controversial visit to Turkey. He wasn’t of course but according to Agca cardinal Bertone would be voted in as the next pope by the cardinals in Rome.

To date Benedict is still Pope and Bertone still Secretary of State for the Vatican, nothing much has changed.

Agca has always had shadowy links to foreign Intelligence agencies it seems, so he may have heard something or rumours from them in both of these instances or it could all be part of his imagination, but all very strange behaviour.