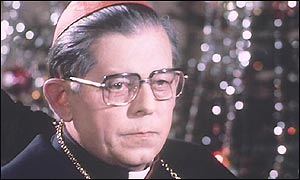 Sandwiched between the charismatic cardinal Wyszynski and the late pope, Jozef Glemp had managed, just about, to exert some of his Polish personality.

Under Wyszynski, he would serve as his private secretary for twelve years. And he would later, after the cardinal’s death, become his replacement as archbishop of Warsaw.

Always in the shadow of the Polish pope, with many suggesting the Polish church was controlled by Rome, Glemp somehow managed to survive in the combative arena of church politics. And as a dedicated bureaucrat earning himself the nickname ‘to Glemp,’ i.e., he pleased both sides.

But as a 13-year-old boy, brutally taken by the Nazis to work in the fields with others as slave labour, he must have experienced something about the art of human survival.

During his 25 year period as cardinal in Warsaw, he condemned AIDS as ‘moral evil;’ called striking Polish farmers ‘terrorists;’ and go on to attack the powerful Jewish lobby in America over the ‘Carmelite convent’ scandal, then located in the grounds of Auschwitz.

As well as alienating Gdansk shipyard trade union members over the role of the ‘solidarity’ martyr-priest, Stanislaw Popieluwszko.

He later underestimated communism as a spent force in his country, believing his church could still accommodate them.

He supported Poland’s entry into the EU. Even going to Brussels in the government delegation. And of NATO’S new role in Europe with Polish troops, serving alongside other forces, he was an early and vocal supporter.

According to leaked secret police documents, Stanislaw Wielgus worked as an agent for them for three decades. Wielgus: “Nobody suffered as a result of my words or deeds.”

How he can be sure of this isn’t clear.

Operating under the code name of ‘Adam’ he was given special training from agents and as a result of this was granted ‘special favours.’

The archbishop had been due to be installed as the Archbishop of Warsaw. However, with just two days into his new ‘job,’ he was forced to resign, one hour before his official instalment was to take place.

Our question is: was he pushed or did he jump?

The death of the Cardinal aged 83 closes a chaotic chapter of Polish life before and after the War. His interview to the communist paper Pravda, the first by a cardinal it seems, later had him being accused of being pro-communist. Yet it was his dealings with the political life in Poland in the 1980s that showed a flaw in his character. He seems to have been naive about Lech Walesa and his aims for ‘solidarity,’ as well as his boss, John Paul II and his views for that trade union and its future.

His shocking anti-Semitic remarks such as: “The Jews were clever and they knew how to take advantage of the Poles,” did little to promote his image in remembering the pain of the Warsaw Ghetto and its terrible aftermath that led to Auschwitz. He also confused religion with Biblical Christianity, always a grave mistake, and his later arrogant defence of his successor Archbishop Wielgus by calling the charges of him being a paid agent for the Polish secret police as ‘exaggerated,’ came back to bite him, when Wielgus himself abruptly resigned.

Until the Catholic church in Poland and its pampered prelates repent, then all is lost for them. We salute and pray for those born again Christians, who today are working in Warsaw and elsewhere in very difficult conditions by distributing Bible tracts and explaining the promises of Christ as revealed in the Holy Bible, as the true and only way forward, in these end times.