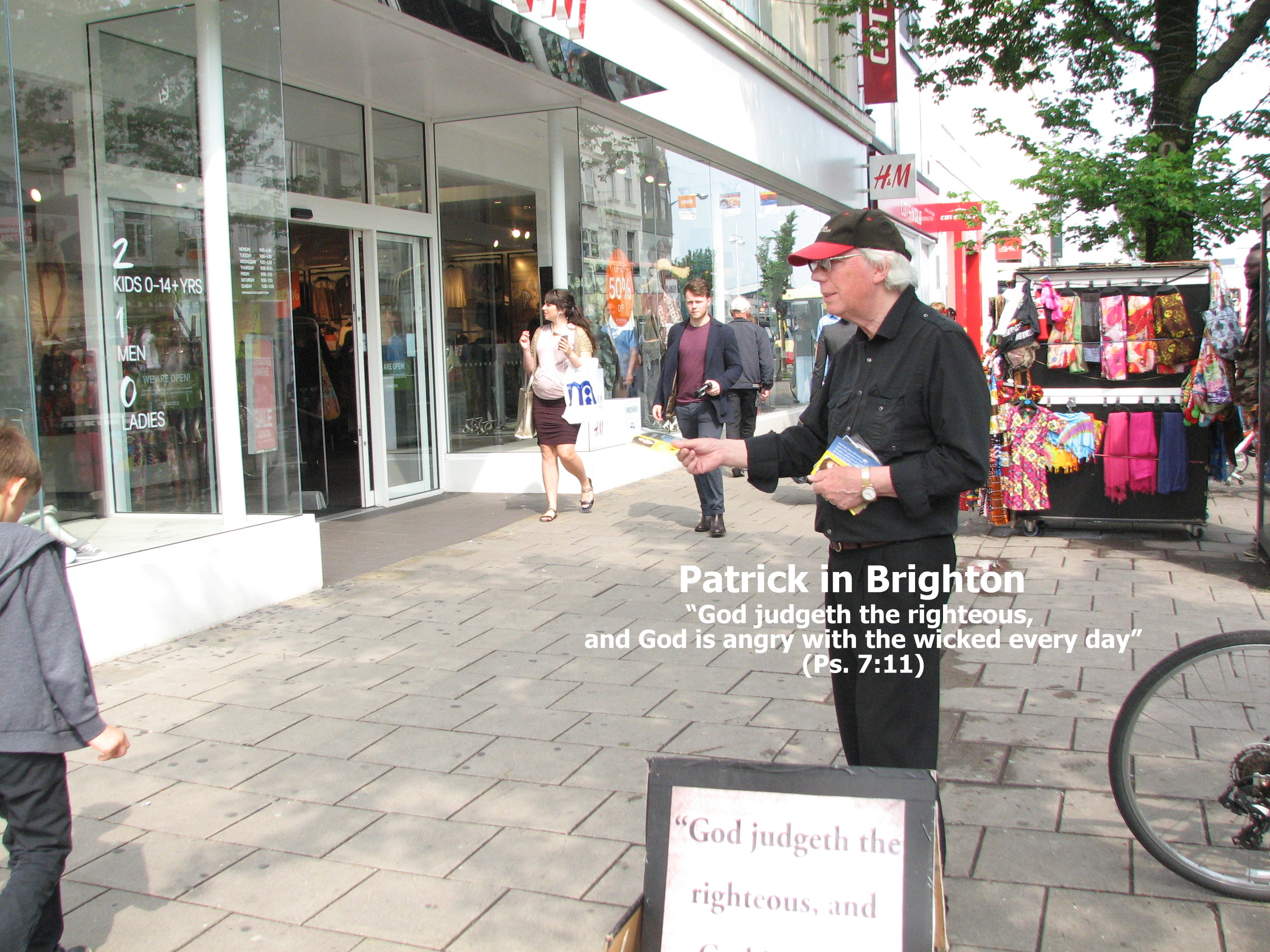 Our annual Ministry outreach began in Manchester on June 1st − when our friends from Singapore flew in − and was completed on June 24th. Our friends from Spain flew in the second week of June. During our almost month-long outreach, we visited 12 towns, distributed over 17,000+ Bible tracts, gave out dozens of Bibles, 500 DVDs and drove over 1,400 miles, passing through Surrey, Sussex, and outer London. 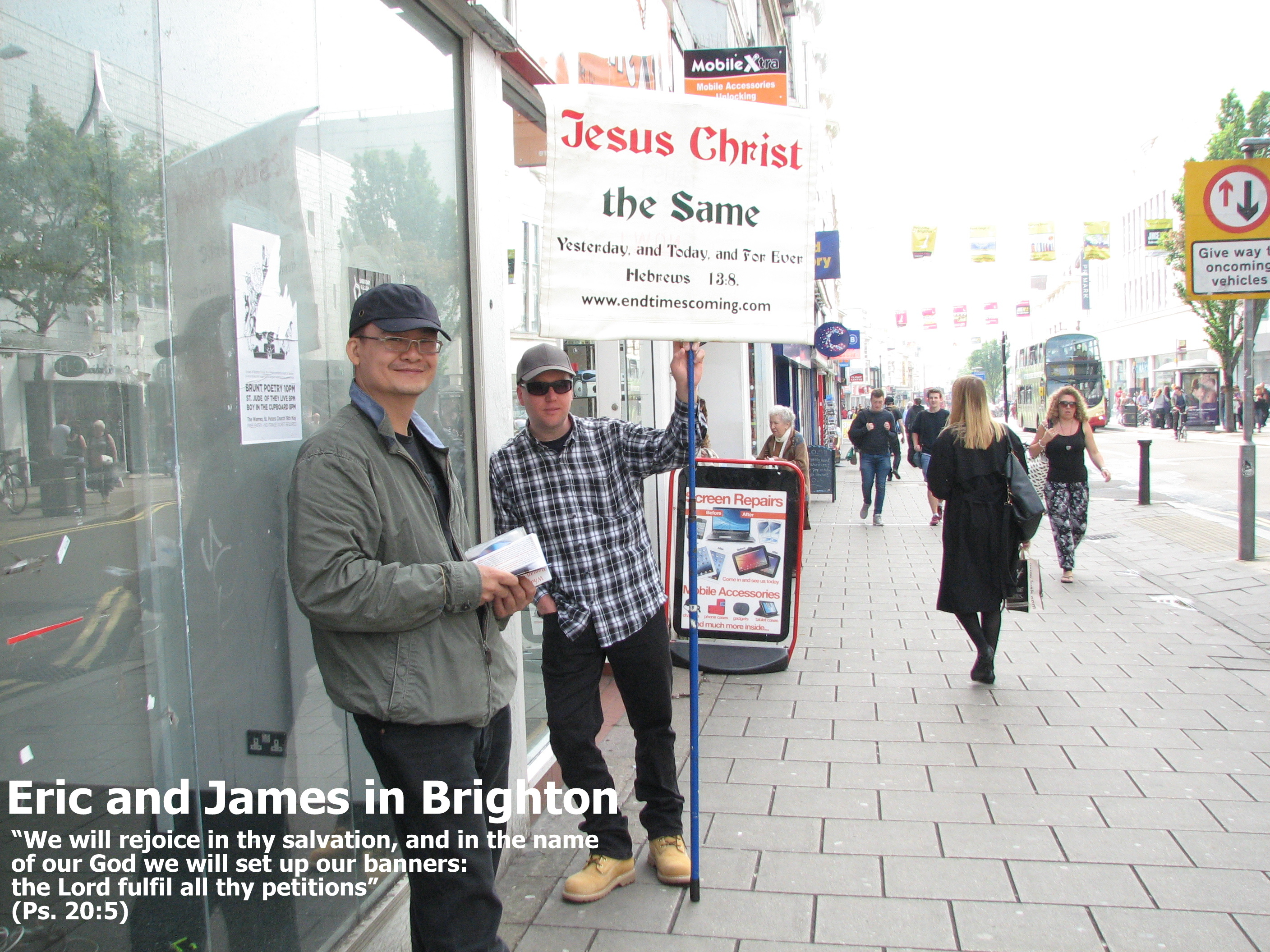 Brother Martin from the Midlands also joined us for a couple of days, and on his way back home distributed 1000 tracts at a local air show! 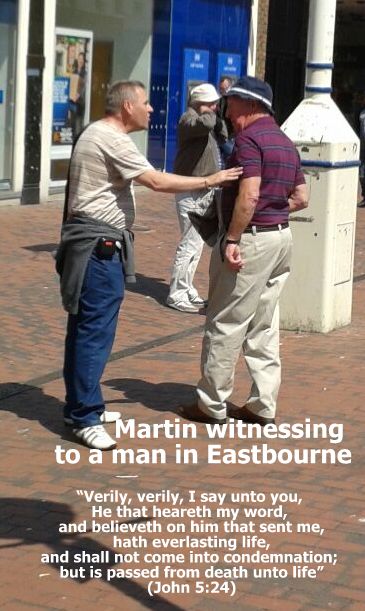 Our south-coast sojourn (June 8-18) saw us based in Rye, Sussex, with all of us enjoying the calm Sussex countryside. However, from the start, unexplained demonic problems came our way. For example, the morning James and I were due to collect our hired car to make the long drive south, my own car battery was found to be flat (never happened before), so a minicab was called to take us to collect our hired transport. We were then able to set off south. 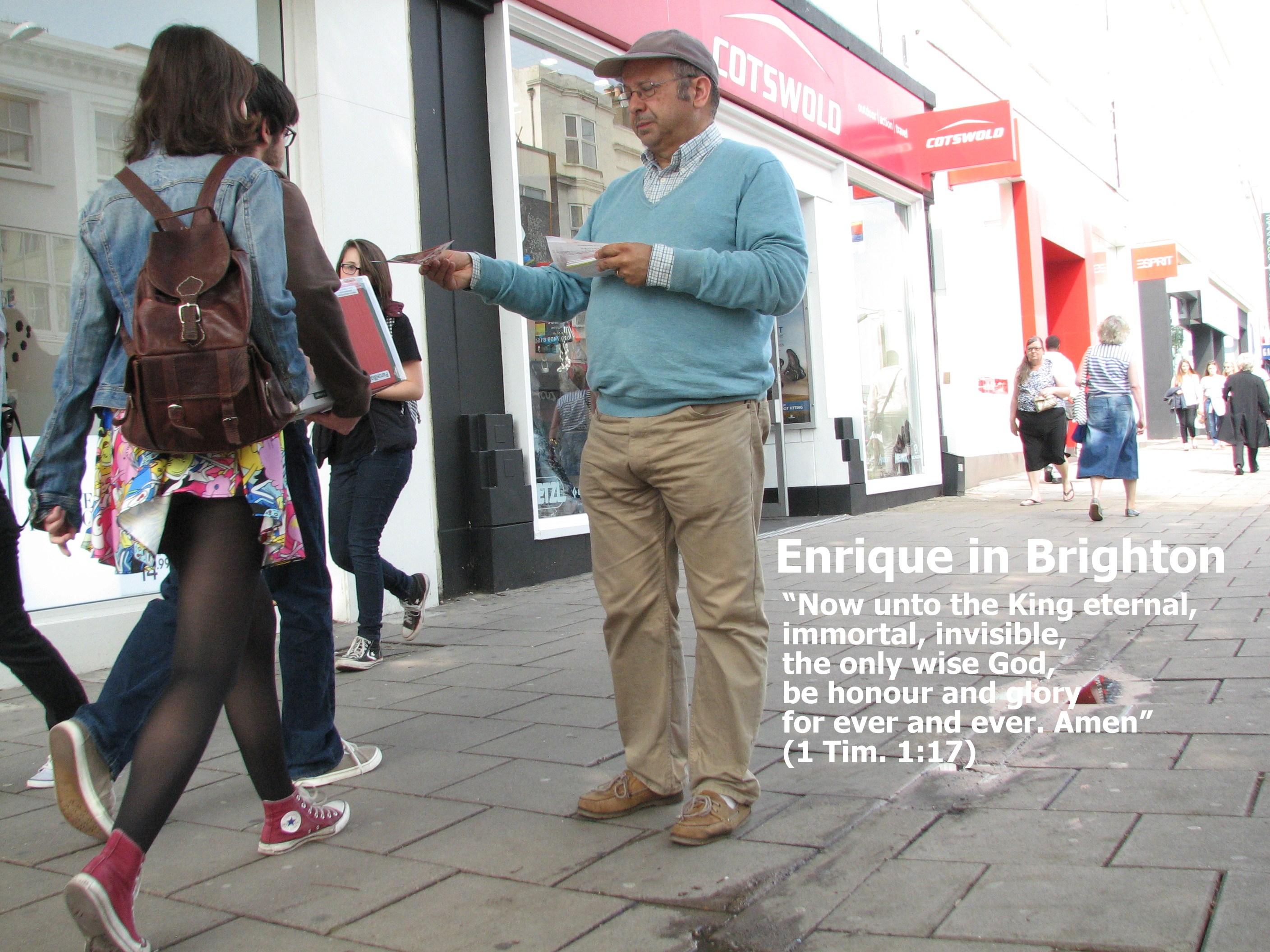 When we finally arrived and settled into our H.Q. in Rye, one of the toilets flooded, bringing untreated sewage into the bathroom through the shower drain, almost flooding the bathroom floor. Not a pretty sight, and thankfully we had all eaten, I’m glad to report. I’ve never had this happen before, I’m glad to say. Help eventually arrived with a professional plumbing company solving this “sticky” and “smelly problem.” Praise the Lord! 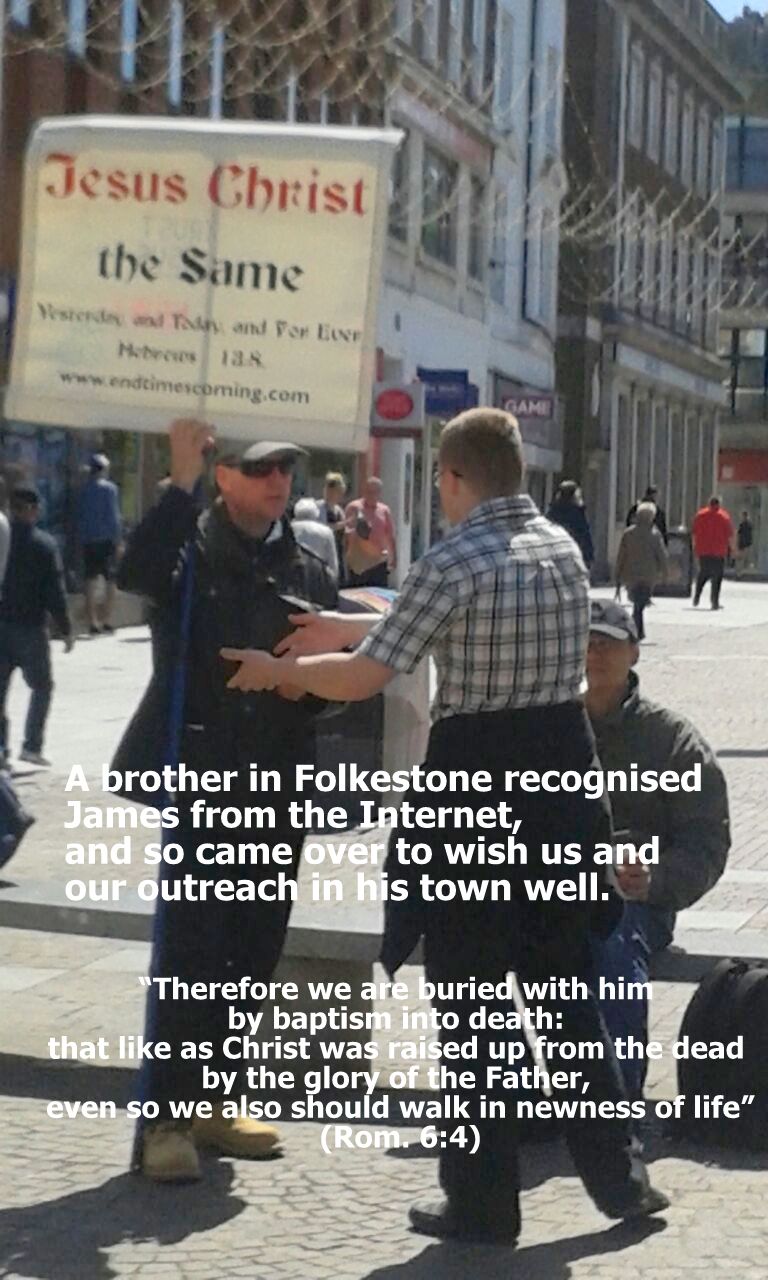 James also experienced numerous “problems” of his own prior to our largest and most ambitious outreach to date. No doubt, he will either write about this in a future newsletter or speak about this on a future video! 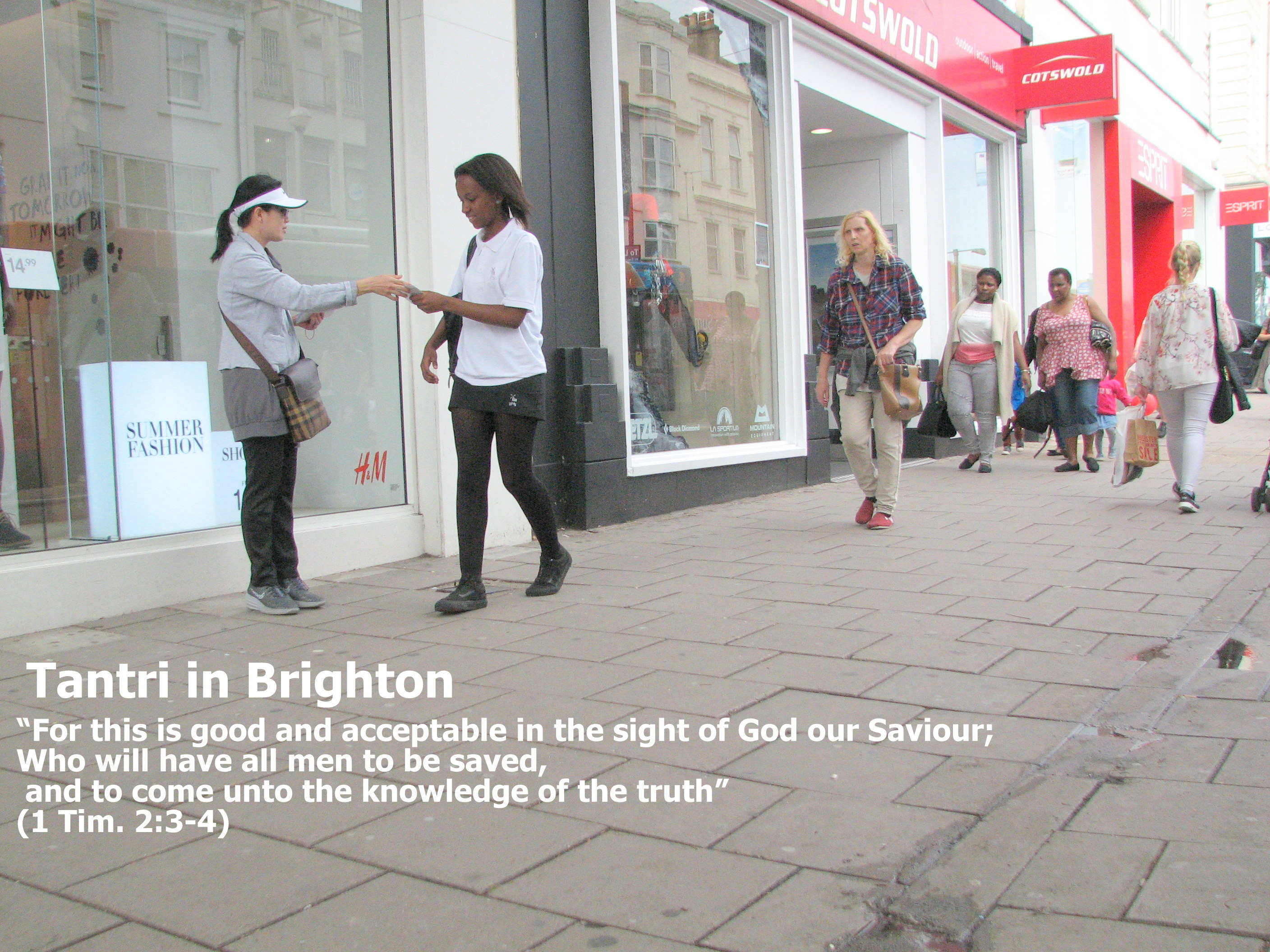 There would be further unexplained problems concerning plumbing when a pipe leaked later into our Singapore friends’ rented apartment in Manchester. This happened twice a day for 5 consecutive days; they did not feel too bad about these inconveniences, but carried on with the outreach, I’m glad to report. I do suspect there were many more hostile threats from Satan that we were not aware of, and we give thanks to the Lord for our safety during the entire outreach as always. We know that many who could not join us in person prayed for our safety during that special time, and we thank them for this. 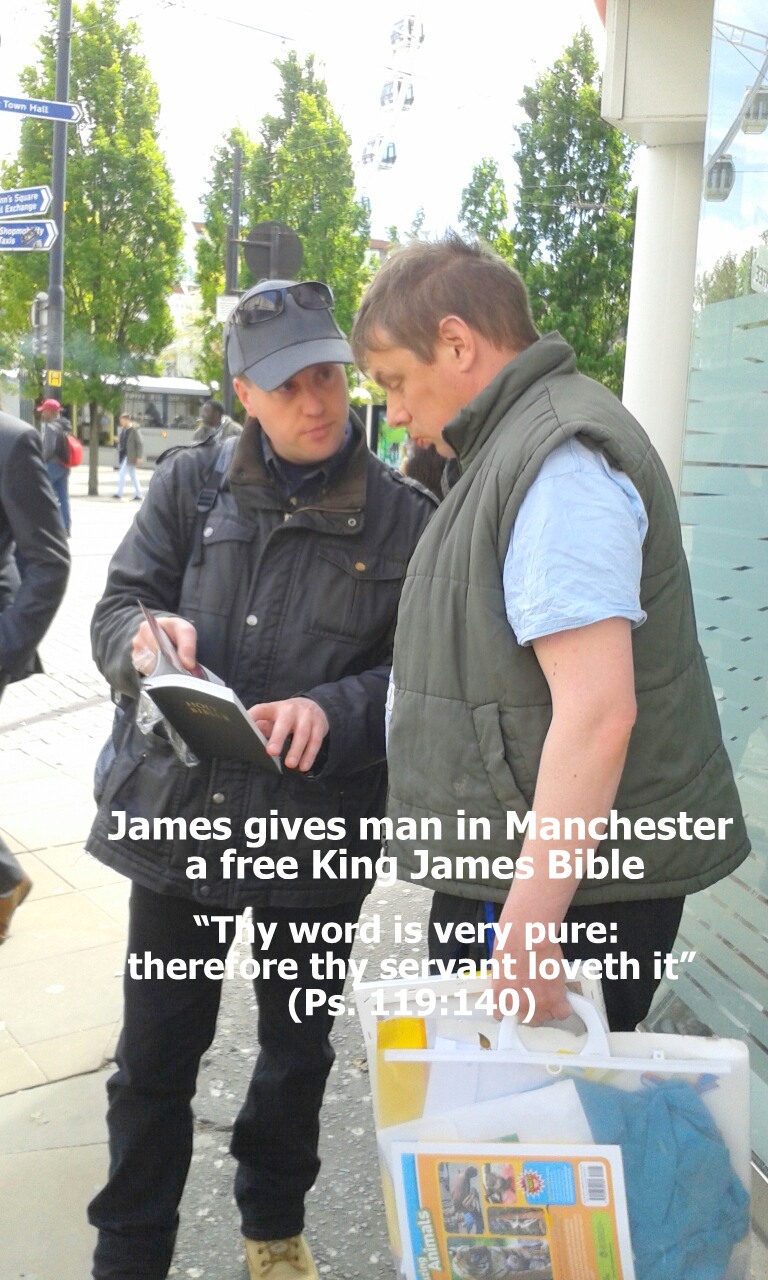 Our street work included trying to offer Bible tracts outside Hastings train station early one morning; this was denied to us by station officials, however. It seems the land is private, but the three of us (Eric, Enrique and myself) decided to letterbox our remaining tracts; always easy to do and always rewarding as well. 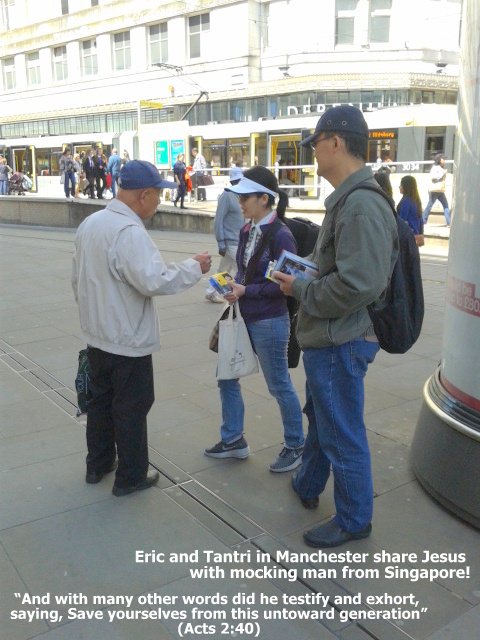 James was verbally assaulted in three altercations that took place in Hastings. The first was from an irate shopkeeper who didn’t like us walking outside his shop (James wasn’t on his property but on the public highway). Both James and myself later “clashed” with an irate demon-possessed bongo player full of hate and venom. I expected to be assaulted any minute, but thanks to the Lord it did not happen. 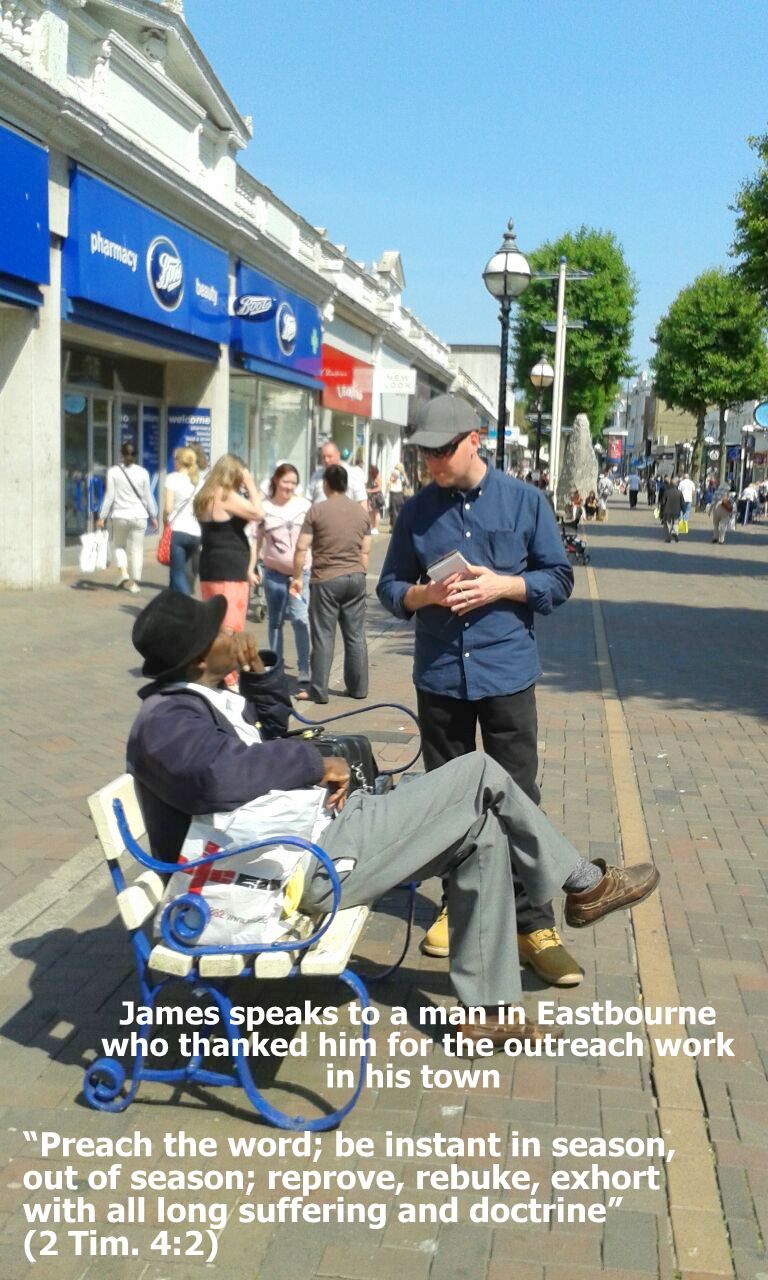 Later another bongo player stood up and seemed to “square off” with James, but James remained calm and defused this potentially inflammatory situation. The town has an unhealthy feel about it! Both Tantri and Eric had some fruitful conversations along the way, but there was unity amongst us at all times as we worked together without fear. 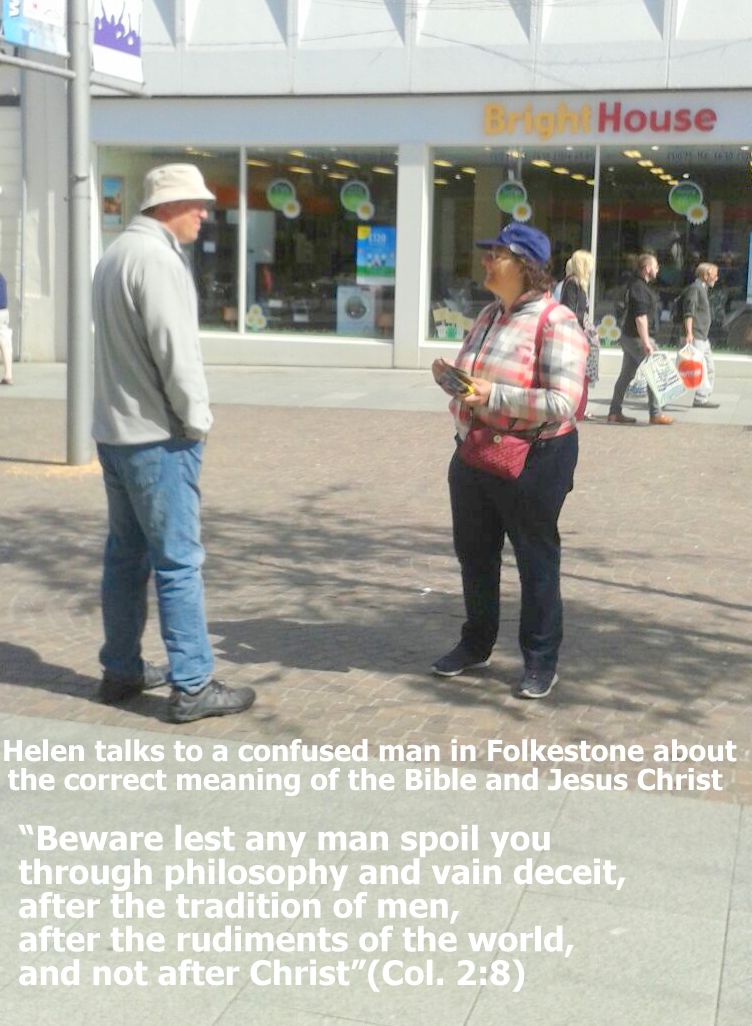 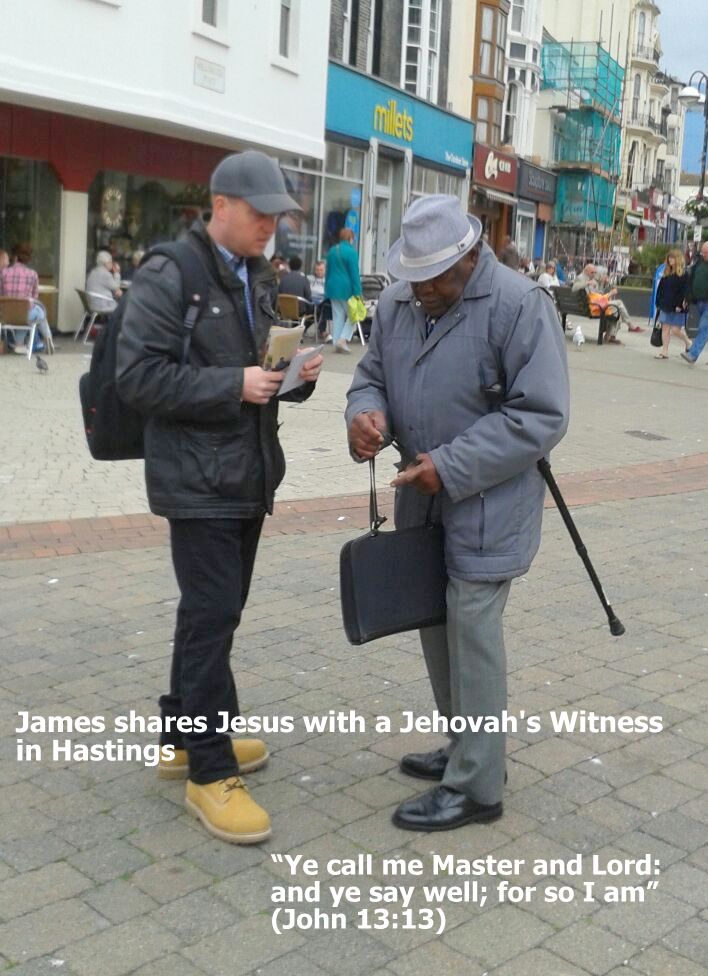 During one evening of letterboxing in Hastings, a man threw one of Helen’s tracts back at her, insisting, “My letterbox is atheist!” She replied, “That’s okay, God has given you the choice to receive or reject Him.” 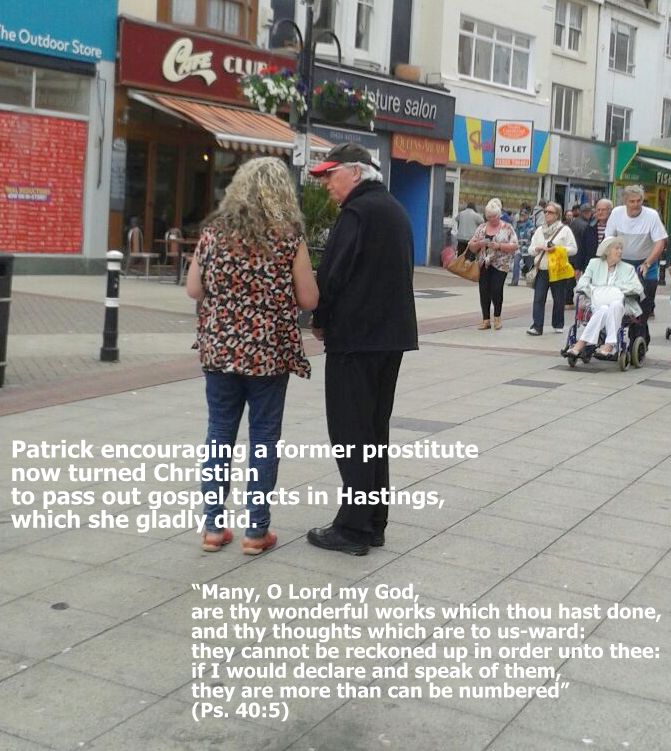 Towns like Folkestone, for example, were good grounds for street work, but Brighton and Eastbourne were harder to plough with the word of God. Ashford brought some interesting talks, as well as some in Tunbridge Wells, I’m glad to report. Of course, there is always the presence of the police waiting and watching what we are doing and saying. 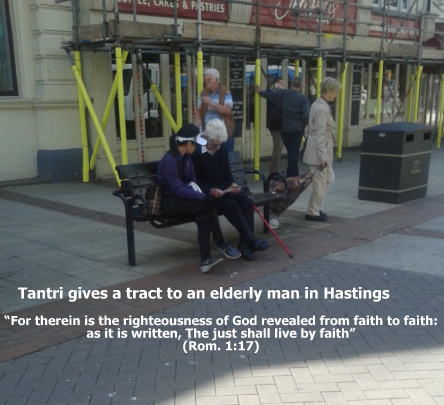 For now, we are “allowed” on the streets to do the Lord’s work, but how long this will continue is anyone’s guess. In this country, we may eventually have to go underground, rather like the Christian churches in other persecuted countries. 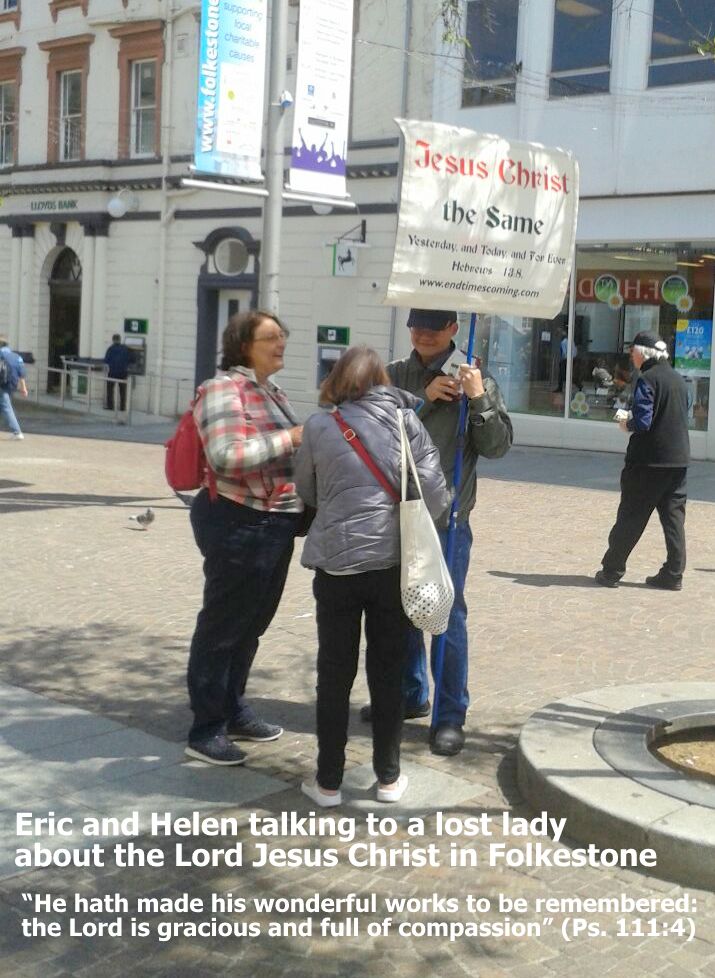 Both James and myself were so pleased when our invited friends from three continents accepted our outreach invitations. They felt just as blessed as we did by what we achieved through God’s amazing grace and thankful for the stamina to carry on when fatigue set in. Incidentally, both Helen and Enrique stopped off in London on their way back to Spain and were able to distribute many tracts in the capital and enjoyed some fruitful conversations, both happy and hostile. We both thank them for this personal commitment to the ministry that they made, and for Helen’s informative street accounts of their time in London; always a joy to read, and I’m really proud of their endeavours and efforts in London. 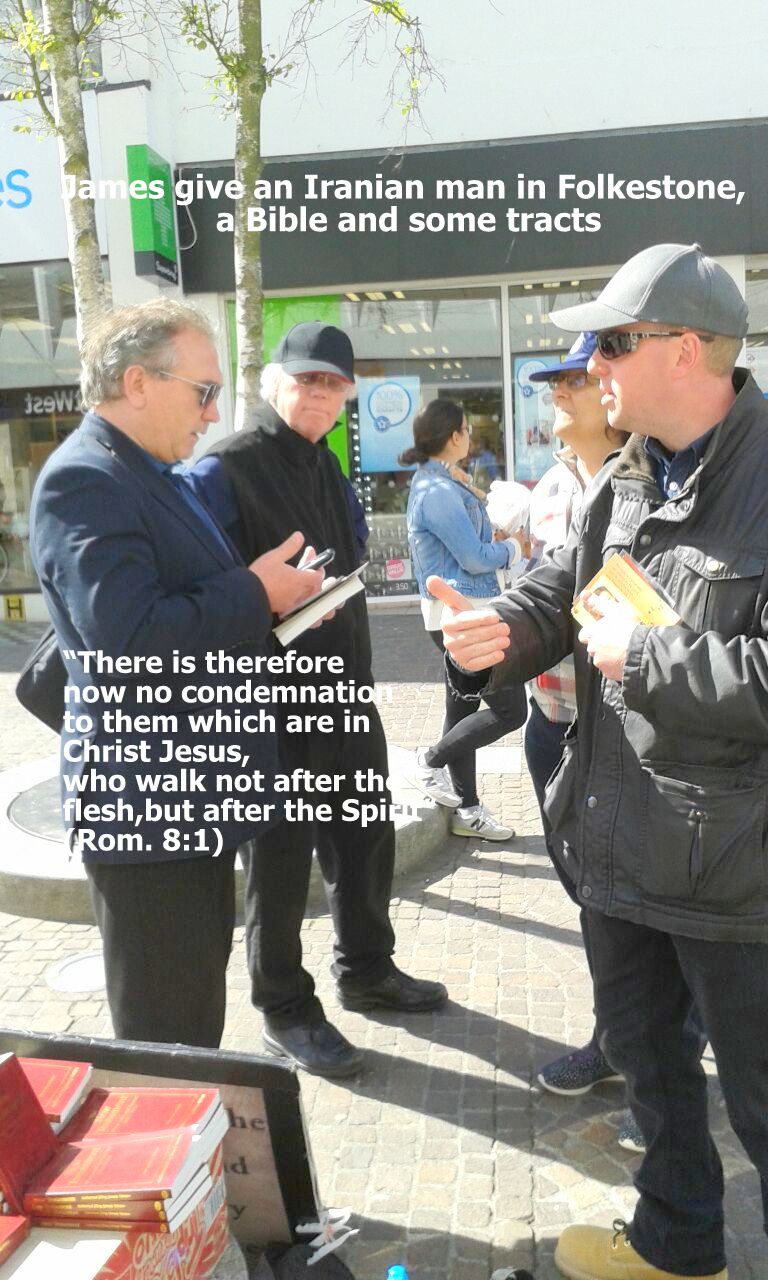 Dear Tantri and Eric were always there with their support when we needed it; our loving thanks to them as always. And when one takes the time to calculate the time spent cooking meals for all of us, preparing the tracts into packs of three, very early in the mornings and late in the evenings, driving to and from locations, and of course the time spent on the streets witnessing and standing up for the Lord Jesus Christ in public, it is no exaggeration to say we spent 12-14 hours a day, directly or indirectly, in the service of the Lord, during our 10 days south. 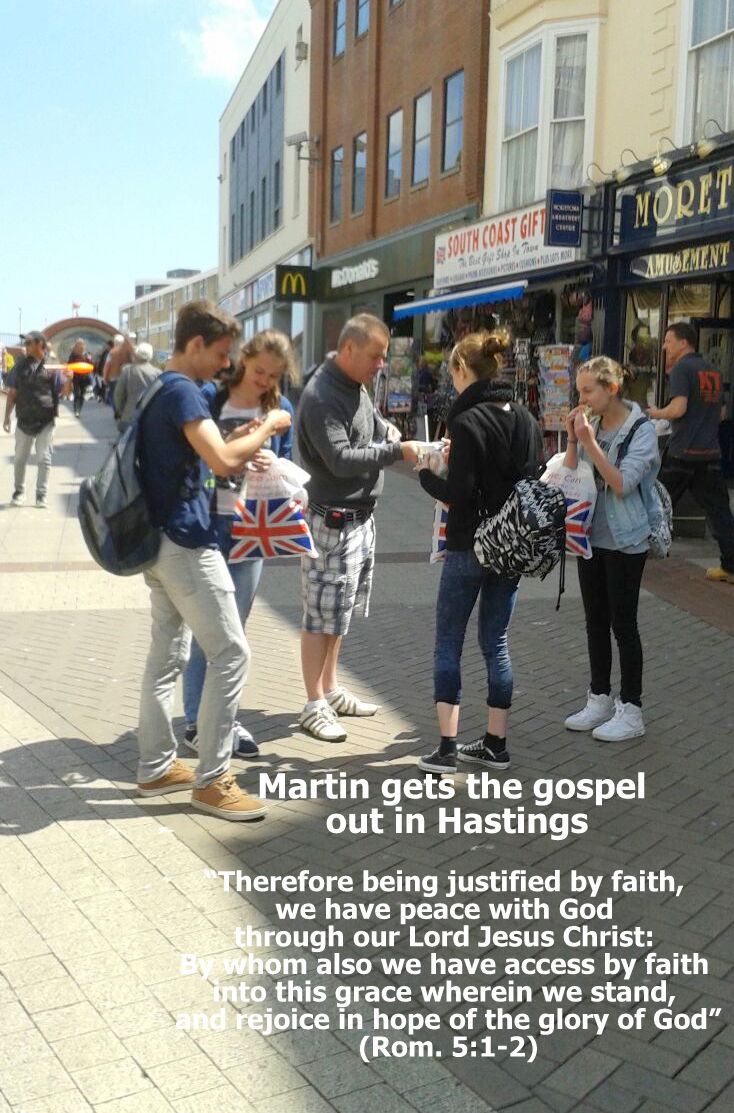 Conversations also ranged from James experiencing an angry Catholic eucharistic minister in Eastbourne, to two homosexual men throwing one of Martin’s DVDs on the ground (clearly convicted) after he spent a good 30 minutes witnessing to them, to two female Mormon missionaries in Hastings asking Helen and her daughter to pray with them, this they politely refused). Helen and Enrique also spoke to a Scientologist in Ashford, who shuddered at the word “sacrifice” in reference to the Lord’s sacred sacrifice on the cross for the sins of the world.

There were also sad stories related to us by recovering alcohol and drug addicts/prostitutes. Of course, most of the so-called street people have secrets of broken pasts and failed relationships, and many naturally drift into deeper despair and death without Christ as their loving Saviour. We prayed with some and there were kind, encouraging words offered to us along the way as well. 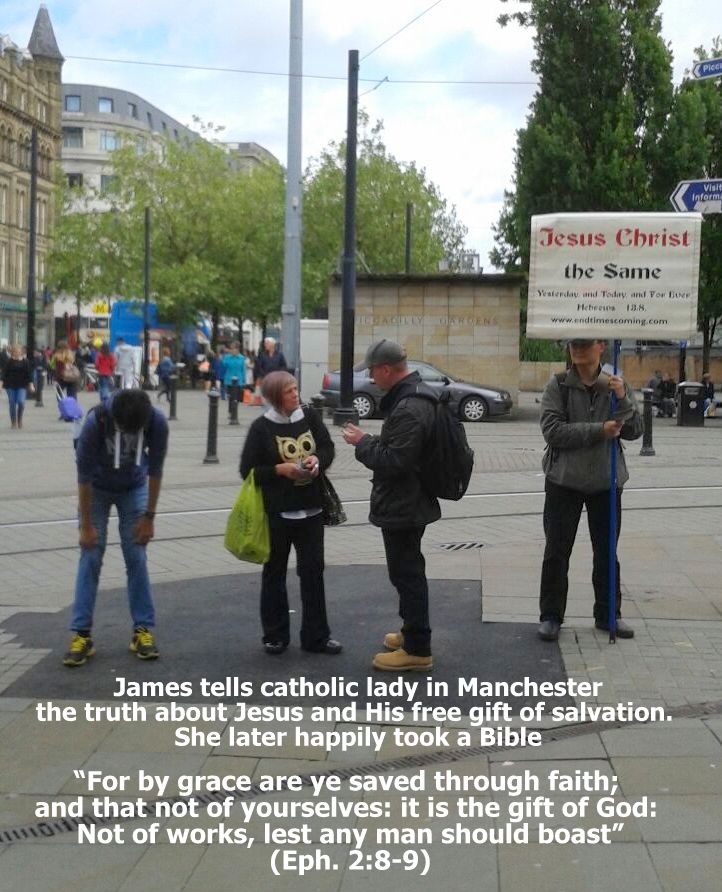 Surprisingly, many interesting and unexpected conversations were had when six students arrived as we were packing up after a long day’s outreach, with questions about creationism, theology and the Greek Orthodox faith, can you believe? We gave them two New Testaments, which we hope and pray will bless them and lead them to true faith in the Lord Jesus Christ. Of course, the road to hell has to be sadly wide, doesn’t it? So many are lost and unprepared for what is to come. It’s rather like walking blindly over a cliff edge, I sadly think. 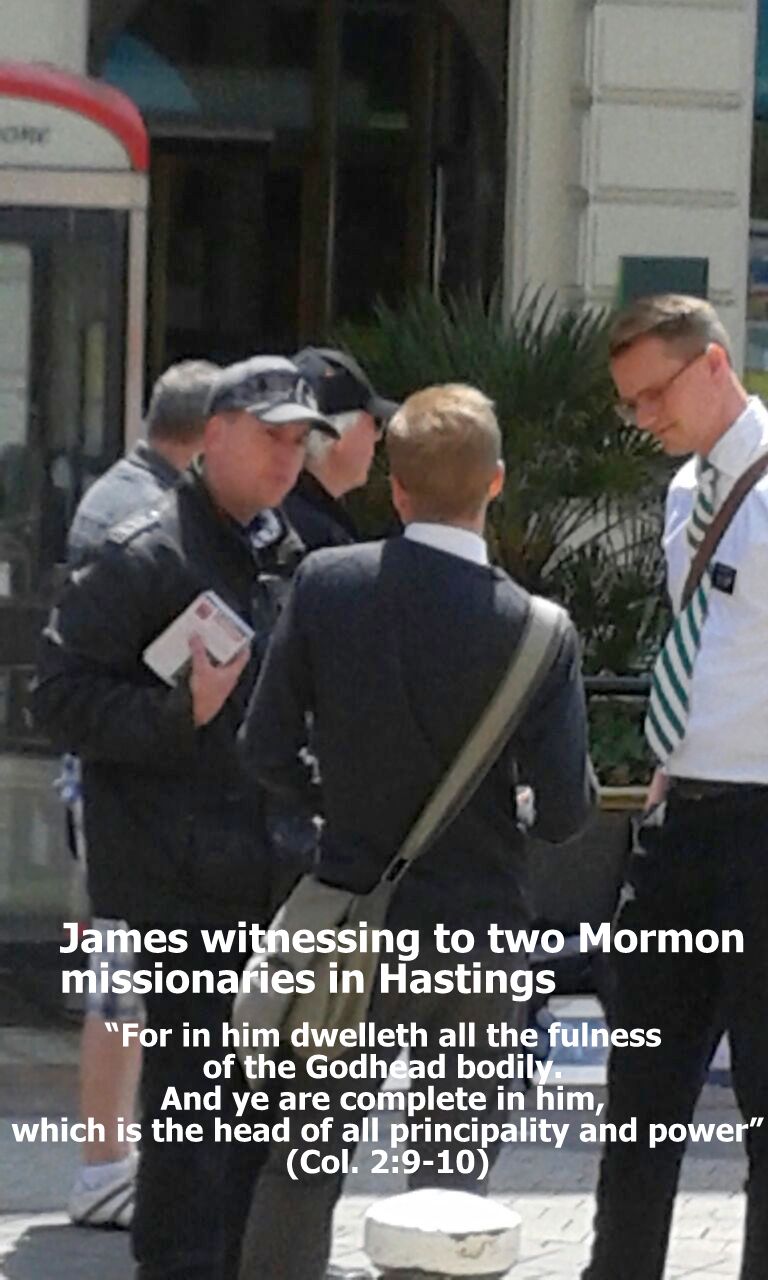 We received questions from confused, misinformed, and at times ignorant people. All had to be answered in the most informative and kind way possible (many of the enclosed pictures that accompany this article speak for themselves). I like to think that our outreach friends enjoyed and gained much lasting spiritual uplift and awakening out of everything we attempted in these long, but rewarding 24 days. We hope they and maybe others may join us next year as we plan our annual outreach for 2016, if the rapture hasn’t come by then! 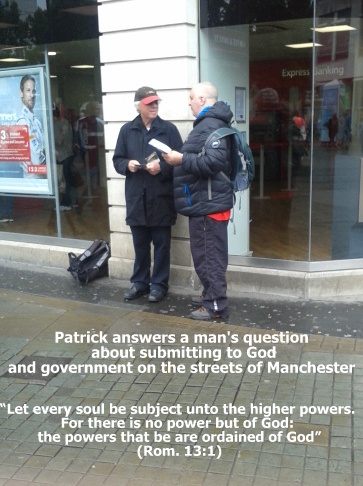