To argue if Bobby Kennedy would have won the 1968 Democratic Party endorsement and gone on to claim the White House as the 37th President is pure speculation. (Personally, I suspect that he might just have pulled it off. The old Kennedy charisma used against Richard Nixon as well, would have been no contest).

Why, hadn’t Jack Kennedy also beaten Nixon by a mere 10,000 votes in 1960, with the help of Sam Giancana and his father, Joe? Bobby I suggest would have won by a landslide, but that’s only my opinion).

Certainly, the mood of the country in 1968, with its antagonism towards the Vietnam War, could only have helped Bobby. Public opinion then was very different than today’s muted opposition to the Iraqi Middle East conflict.

Next month at the Cannes film festival a new film entitled Bobby will be premiered.

Early reviews so far are encouraging. And I suspect that the director wishes to present its dramatic content to a new generation, very much unaware of the emotional impact it had on an offspring, then high on sex, drugs and rock ‘n’ roll.

We at this ministry always try to review all new information that points to the New World Order and the arrival of the Antichrist. So I have to suggest that an “order” was issued to remove Bobby from the political arena in California. Whoever authorized it was successful, after all, hadn’t the same thing worked in Texas?

Now I don’t wish to suggest that Bobby Kennedy was a supporter or an admirer of a one world Government that operates under the shadowy Illuminati. Indeed it has been suggested that his father, Joe was a practising member of such a cabal. But Bobby must always have known of them, their existence and of their dangerous influence in American political life. And if he didn’t, why didn’t he?

Forty years ago I had never heard of such secret societies and knew little of their prospective plans, and I did keep up with all the news and current affairs programmes then available, as anyone who knew me then will testify.

However, Bobby did move easily in and out of such a shadowy world of acolytes of such a fascist state. Names such as Harriman, Dillon, Hoover, and Dean Rusk, Allen Dulles (apparently on the base-relief of him on the walls of the CIA. building are the words: “His monument is around us.”) All of them supported or were paid up members of the Council of Foreign relations (CFR.) All knew of the Bilderberg and supported its global hegemony. Even Jack’s Vice President, LBJ. was a mason. So too was the FBI supreme J. Edgar Hoover. They may even have attended the same lodge in Washington.

Three years earlier in 1961, President Kennedy had warned about secret societies in American cultural and political life, in a keynote speech to the press. (Sadly most of them bought the Warren Commission.) In hindsight, perhaps this was a dangerous gesture on his part and I’m sure Jack would have spoken to Bobby about preparing such a speech before its delivery.

Then within eight years, both brothers would be murdered by bullets, fired by ‘lone shooters,’ or so the official government cover up states!

And again didn’t Bobby know such men in and out of the White House compound? He may even have advised his brother to offer some of them important appointments in the JFK Government. He also mixed socially with them, both Harriman and Dillon were invited to act as “godfathers” at one of his son’s baptism. 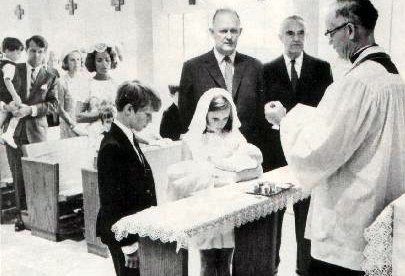 (The new baby was baptized, Douglas Harriman Kennedy. Bobby must have had great respect for these two ‘brotherhood men,’ to name his tenth child after them!)

Yet Bobby came from tough Irish stock, didn’t he? (Remember his one-liner: “Forgive your enemies, but get even first.” You don’t learn that lingo by being a sissy in the playground). And he certainly used his muscle, accordingly, both as Attorney General in declaring open season on the mafia and the Teamsters! (Whatever happened to Jimmy Hoffa? If anybody knows, please let us know.)

Bobby was also active on the National Security Council during the Cuban missile crisis and the Berlin crisis (remember that one?) Bobby certainly knew his way around the treacherous corridors of power, well didn’t he? But was he perhaps just a little naive about the New World Order and its future intentions for all of us?

So who is or what is such a shadowy elite organization known as the Illuminati?

“The aim of the Illuminati is the introduction of a World Government to which every continent would be subordinate. It would dictate foreign policy and control the World Army.”

And since 1776 this has been their perpetual aim, so wrote an observer.

I also believe another of their ambitions is for a ‘one-world religious church’ to be headed by the coming false prophet.

Even during Bobby’s tragic campaign tour, numerous election banners seem to sprout all over America, urging people to seek ‘a newer world.’

What did this mean?

Well, Bobby Kennedy always had a penchant for poetry, you must understand. His known admiration for Robert Frost, Thoreau and Lord Alfred Tennyson have never been doubted.

Indeed his memorial Mass card proves this in the famous quote of Tennyson, used for that sombre occasion.

Yet both American poets would claim to label themselves as ‘freethinkers’ or rather new age in today’s menu of assorted religions.

Of the poet Alfred Tennyson, some rumours claim he was a practising Freemason, with a dangerous interest in the occult!

Doesn’t Tennyson in his epic 1842 poem Locksley Hall open with a shout of ‘Comrades’ referring to a future “Parliament of Man, the federation of the World.”

And what about The Old Order Changeth – Yielding (the) New. This from Sir Thomas Mallory’s, Morte Arthur.

Both stanzas seem to offer to me a thin veiled Marxist coming agenda, announcing their hope to initiate a new ‘socialist heaven’ on earth but instead leaving only a living hell for all who were and still are forced to exist in a so called ‘workers paradise.’

So it’s no coincidence to me that Bobby named his 1967 bestseller To Seek a Newer World. And is he emulating his heroes here or has a subliminal message been introduced to him and us in a covert manner?

I certainly suspect that Bobby knew of and was even afraid of such dangerous organizations, not so much for himself but for his family. But by then, in the last two hectic years of his political life, it was far too late for him to reign in his ambition to be the next president and follow in the footsteps of his older brother.

The murders of the two popular Kennedy brothers will perhaps never be solved with satisfaction, either way, the lasting reputation of Bobby does not seem to have suffered. Except perhaps in his personal life and his and Jack’s ‘relationship’ with Marilyn Monroe. And did he aid in the swift cover-up of her death, only hours after it happened? His late brother-in-law alluded to something rather like this just before he died.

And remember his favourite quote from George Bernard Shaw: “I dream of things that never were and ask why not?”

But didn’t a wise man once remark: “Be careful of what you dream about, you might just get it”, but at a cost, Bobby tragically paid the price for his actions. Tragically if only he had realized that you can never build a new world amongst a fallen world.

The assassin’s bullet that was fired in the Ambassador Hotel not only would end the senator’s life in 1968 (incidentally that hotel has now been demolished. Also I do not accept that it was Sirhan Bashira Sirhan’s gun that took Bobby’s life, he was set up and merely fired a blank) but also robbed a grieving generation of its hopes and future aspirations. Sadly it also ended Bobby Kennedy’s dream of a ‘newer world.’

The age of purity – if it had ever existed – had now been trampled into the mean streets of Los Angeles. From then on, it would be an age of cynicism that would present itself to a lacklustre electorate for inspection at the ballot box, with many declining to even vote.

So I have to suggest that The New World Order had won, at least for the time being. But, remember their days are numbered!

One is coming, mightier and more powerful than all of them!

First of all, I have to admit that before I was saved, I was a great admirer of Bobby Kennedy. I liked his style and approved what I thought he was trying to bring to the underclass in America.

I certainly remember very well the shooting of Bobby and months later the same thing happening again to Luther King; it certainly was a crazy summer that I will never forget, in more ways than one!

As regards the new film, I think I’ll wait until it comes out on DVD. But what about you? Will you go and see it and if so why?

Let me know what your thoughts of the films accuracy. I would like to know.

However, I don’t expect to see another politician again with his charisma that appealed to all ages and races. It was a rare quality that he had.

But the price he paid was too great for himself and his young family, instead, he became a sacrificial victim of his own fame and in his own time.