This month, April 28th to be precise will be the 66th anniversary of the shooting/murder/assassination of Benito Mussolini, Claretta Petacci and others.

And he certainly hasn’t been forgotten in film, with such diverse actors as Jack Oakie, Rod Steiger, George C. Scott, and Bob Hoskins all trying to worm under the skin of the man they called “Il Duce.” I personally always suggested that the late Telly Savalas, who would have made a marvellous Benito Mussolini, if he had only been approached by an ambitious film producer.

Yet Hitler and Mussolini will forever be associated with each other in history, both would fight in the Great War and reach the rank of corporal, both would be amateur musicians (Hitler the pianist and Mussolini the violinist.) However, I do not see Benito as rabidly anti-Semitic as Hitler certainly was.

In some ways, he tried to navigate the difficult middle way so happily promoted and promulgated by Blair and Clinton but later leaned towards the Nazi war machine after 1940.

He would ban birth control, divorce and emigration as well as drum up support for more tourists to visit Italy.

However in running his country for 20 years, he would bring it at times screaming into the 20th century but he persisted, yet his fatal mistake was to aligning himself to Hitler’s expansion programme. General Franco, on the other hand, did the opposite.

But I suspect Benito craved some of the fame the Fuhrer so enjoyed. And he was perhaps the first fascist leader to strike a popular chord with the masses before it evaporated. And even in Germany a watching Hitler in his early days perhaps copied the Roman salute and the fashionable black shirt from him that would in Germany become the despised brown shirt. Mussolini would once predict that the 20th century would be the century of fascism, well he got that right.

And both men found ways to accommodate the Catholic church into their own countries everyday life. Mussolini would sign the Lateran Treaty (1929) for Italy with Hitler signing the Nazi concordat for Germany (1933.) Today’s modern Vatican City was conceived out of this treaty and both men claimed to be atheists, yet Hitler looked to Norse gods for inspiration. Mussolini seems to have believed in very little spiritually. Yet the Pope who would claim of Mussolini that: “He was a man sent from Providence.” Well, he certainly got that wrong.

After the First World War, he seemed to journey from Marxism to narcissism with the greatest of ease. He would also flirt with Freemasonry and later weed out many of his generals who might be themselves performing in Masonic rituals. “Il Duce” as he liked to be known as a “one-world” man who believed only in his own selfish ways and that the world that revolved just for him.

And certainly, Mussolini was rather proud of his green credentials even before they became fashionable. He even declared the Isle of Capri to be a bird sanctuary. He also promoted the idea of shrinking newspapers to conserve the world’s wood/pulp. All commendable green causes it seems.

Yet with his fall from power in 1943, soon after the daring mission to rescue him by Otto Skorzeny, his place at the high table of Nazism seemed to dim. It may have been more expedient if Hitler had left him alone in the mountains to await his own fate from his own country and who knows he might have stood trial and been quietly released some years later to compose his memoirs in his beloved Predappio. (In fact today there is an ornate shrine/grave erected to his memory where every year thousands journey to this “Fascist Lourdes” to remember the man and some of his mystic.) 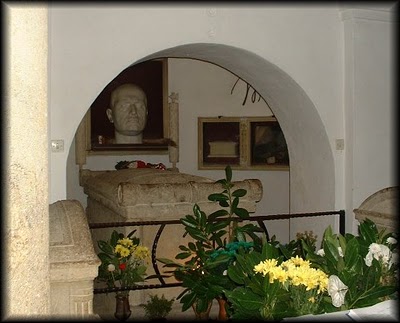 Hitler had once certainly been an early admirer of Benito, even mentioning his name in Mein Kempt.  Yet after the rescue of Mussolini and arriving in Berlin in 1943, he would become a liability. This I suspect would prompt him in preparing to return to Italy, then divided in a bitter civil war. Yet of his own life he once wrote that: “Who fears death has never lived and I have lived too much.”

Yet death does you know claim 150,000 each day, suddenly and swiftly, many unprepared and most unrepentant. How sad, how futile.

Mention must be made of the young woman who would be forever associated with him Claretta Petacci his doomed mistress. Yet she was not just any young woman who languished under his spell. Her father was one of the pope’s personal doctors and at her wedding in 1934 no less a personage attending the nuptials was the pro-German Vatican Secretary of State, Cardinal Pacelli, later to become Pope Pius XII of course (Hitler’s Pope as he is also affectionately called.) Clarita was also an inveterate secret diary keeper it seems and isn’t this always dangerous in the world of politics.

Yet sixty years later so much surrounding the final one hundred days of Mussolini’s life and death remain unclear and unanswered. “The game is up for me, it is finished,” he would lament in his final hours to any who would listen to him. Yet few will accept death when it presents its calling card for a personal audience with God. But more importantly James 4:14 reminds us:

“Whereas ye know not what shall be on the morrow.” Death, as they say, happens every day. Are you ready for your own appointment when it presents itself to you?

Again his motto was: “Believe! Obey! Fight!” But this seems to have applied to all others but certainly not to him. Once he said: “Fascism is a religious conception.” He would attempt to dismiss the Holy Bible to the scrap heap of history and in this, he would fail as all other dictators have and will do so now and in the future.

Yet certain circumstances of the events of Mussolini’s final days still remain unanswered and rather baffling, for example:

Why when he and his party were so close to capturing and so near to safe Switzerland did he foolishly turn back to confront his enemies and who was “the renowned religious figure” that he trusted to aid him but never seemed to materialize? So were the Partisans reliably tipped off about his whereabouts by intelligence units of the approaching allies and had an agreement been reached that he would never stand trial.

Why did he fear capture from the Allies and was there a Churchill/MI5 connection concerning his murder on the 26th April, and did he indeed conceal important correspondence from Prime Minister Churchill to himself as some claim? And why did the former Prime Minister soon after the end of the war take a painting vacation in Italy and very near to where both Benito and Clarette had been held captive before their brutal executions. Is this a coincidence or not.

And what of the perhaps dubious Vatican involvement with the assistance Mussolini would receive from cardinal Shuster of Milan in those final weeks? In fact, in the square close to the cathedral the world would witness the infamous photos of Mussolini and Claretta hanging from their swollen ankles so grotesquely after they had been beaten abused and urinated upon by a frenzied mob. An appalling picture even today.

So the mystery of Mussolini’s murder seems to have presented the enquirer with more questions than answers.5 And finally what of poor Claretta Pettachi’s secret diaries that for so long were locked away in the state archive in Italy. Some of these were to be published in 2002 (in fact some were in 2009, however after objections from a family member in America, the dairies were withdrawn and will not be released for full inspection until amazingly 2015.  So is there perhaps in those locked away notebooks that the state has withdrawn something that might damage England, Italian, Vatican relations. Even today in 2012, it does seem rather odd. This confusion on what the Italian Government has withheld and what will be permitted in 2015 for release only seems to preserve this Italian melodrama forever in the public eye and of course, the name of Mussolini and Claretta, of course, will march on forever, when really they should have been consigned to the distant past years ago

In conclusion, the mystery of Benito Mussolini’s demise seems to me to raise more serious questions than convenient answers.

But then isn’t that true of all ongoing mysteries. 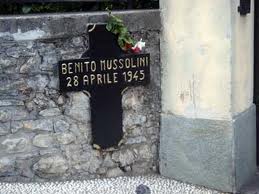 “And as it is appointed unto men once to die, but after this the judgment.”

According to the London Guardian, dated 25 January 2013, the Vatican in London is concealing hidden millions of pounds in the lucrative property. In fact, the Vatican international portfolio emanating from Luxemburg/Switzerland seems to be thriving in Europe.

In London alone, upmarket jewellers and prestigious investment bankers, as well as luxury properties are benefiting from this lucrative blue-chip stock, which originally was part of the money Benito Mussolini paid over to the Vatican in 1929, known today as ‘the Lateran pact.’

Even during the War and afterwards, the Allies were noting these “shady activities and dirty work,” coming from the Vatican in the movement of millions.

Today the pope’s so-called ‘merchant banker’ based in Rome seems to be controlling a nest egg of assets valued at approx £570 million, if not more. Not bad in any money language. When the paper’s reporters naturally asked the pope’s representative in Wimbledon for a statement about this wealth’ they were informed “no comment.” Were not surprised.

So much for the so-called ‘church of Christ’ concealing its true colours. In fact in Matthew 24:23 Jesus warns: “If anyone says to you behold here is the Christ, do not believe him.”

The church of Rome has always been a flawed religious institution which will be destroyed one day when Christ returns in a physical body to eliminate all false religions and political institutions. These men, both bankers and clerics who are knowingly involved in these “shady” transaction’s, should be shaking in fear and begin examining their consciences before it’s too late.

The last days of Mussolini, by Ray Mosley

Mussolini and his Generals, John Gooch