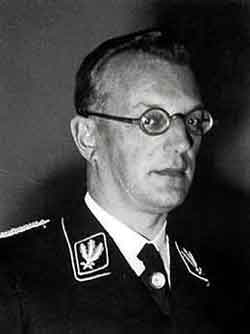 When Arthur Seyss-Inquart (party number 6270392) eagerly enlisted into the fledgeling Nazi party in 1931, he was eligible as a practising lawyer to promote the political aims of Hitler’s warped vision of a Germany liberated from Jews, Freemasons, Socialists and other fierce opponents.

Like his hero Hitler, he too was born in Austria, baptised a Catholic and became a decorated War hero of World War I. Much of this early influence would remain with him throughout his life.

Yet it was the “Anschluss” or “Political Union” imposed upon Austria by Hitler and his intention for that country to become part of the German Reich-and something it seems many Austrians had dreamed of for a thousand years, that allowed Seyss-Inquart to step into the political limelight and it seems with relish!

As appointed “Reichsstatthalter” for Austria he would welcome Hitler to Vienna in open triumph. Closely followed of course by the secretive Gestapo.

Now we’ve all seen the pictures of bearded Jews scrubbing the streets of the capital with toothbrushes, haven’t we? So some years ago I had the opportunity to ask an elderly Austrian lady who was there at the time and a proud Nazi if this was indeed true and had she seen it? She fixed me with cold eyes and stated: “I no talk about it.” I wonder why?

Much of the enthusiasm for a desired yes vote in the called for plebiscite came from Cardinal Innitzer.

He was very much pro the Nazi agenda for his country in spite of so-called “warnings” from the Vatican!

Later at a Nazi gala reception, it was reported that Inquart, speaking personally to Innitzer and his guests, including an American bishop, would claim, with a wide flourish and beaming smile on his face that:

“Today I received a telephone call from the fuehrer in which he said, ‘All Austria must be at your command, my dear Seyss-Inquart-except Cardinal Innitzer. Remember you have your authority from me, his is from God.'”

Apparently, the cardinal beamed in appreciation of such a complimentary comment. None more so than towards the then Nazi Ambassador to Austria, the papal knight and Hitler loyalist, Franz Von Papen.

Later during the war as Reich Commissioner of the Netherlands, Inqaurt would in 1940, introduce harsh new citizen laws dealing with all known opponents of the Nazis.

Indeed over 3,000+ loyal Dutch citizens were murdered because of this illegal gesture. Many others would be sent to concentration camps to die of starvation, disease and torture.

Later Inqaurt would repeat this sadistic treatment towards long-suffering Poland during his time as Hitler’s henchman in that country. This was above all state-terror that the so-called “Warsaw Ghetto” would experience under the Nazis and compliant Polish police officials.

Yet Inqaurt’s appointed time was running out and at the end of the war he was detained whilst trying to escape from Holland by Canadian troops. Later he was dispatched to Nuremberg to stand trial by the Allies.

There he was found guilty of crimes against peace and assorted war crimes.

After the sentence was pronounced, he seemed to offer no remorse for his sins except to admit a “fearful excess of the Nazi regime.” How feeble. But it would make no difference to the presiding judges. And at the age of 54 years, he was hung from the prison gallows. His last recorded words were: “I believe in Germany.”

Inqaurt had spoken his final unrepentant utterance it seems.