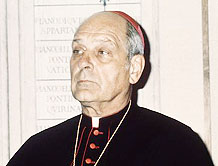 The death in Phoenix, Arizona of Archbishop Paul Marcinkus aged 84, brings to a final close (well almost) of a disgraceful period in the history of the Roman Catholic Church.

I suspect that some of his parishioners who knew him affectionately as ‘Father Chink,’ had no idea at all of his financial dealings in his long tenure as the director of the Vatican Bank from 1971-1989 in Rome, and why should they?

However, Sky television sent one of their reporters out to visit “Fr.” Chink late in 2005 and when they were unable to track this reclusive man down, they visited his local chapel, where they were able to speak to some of his elderly congregation.

When asked about his dubious business dealings, they all refused to believe it and went on to tell the reporter how wonderful and happy they were with their ailing Pastor. They saw him as a faithful smiling cigar-smoking priest from far away Chicago who enjoyed a regular game of golf around his Sun City gated retirement community in the Phoenix Archdiocese. Maybe even some of their sons happily caddied for him.

Sun City, Arizona, has a modest population of just 40,000 people. This former heavyweight of Rome (once called the guerrilla) lived comfortably in his $400,000 bungalow, with outdoor swimming pool (owned by the diocese of Chicago), and played golf in their exclusive and private lawns, while still enjoying Vatican diplomatic immunity; he was known by his American parishioners, as “Fr.” Chink. Before his death on the 20th February 2006.

A Vatican “official” made a trip to see him and was able to collate some of his “papers,” before returning back to Rome.

Yet during this period in his office in Rome at the Institute of Religious Works (IRS), he quickly earned the sobriquet of “God’s Banker” which of course he wasn’t, but I’m sure he enjoyed being called it all the same. And into this shady religious world such names as Calvi, Sindona, Paul VI and John Paul II, would be named for the first time in the press and even some, criminally indicted, as financial rascals.

For Roberto Calvi, it would end for him desperately alone in London hanging from the steel girders of Blackfriars Bridge. For the charming but ruthless Michele Sindona, his unexpected death would arrive in a harmless china cup of coffee offered – but unknown to him – heavily laced with deadly cyanide within the walls of a Milan prison. Many financial experts would also suggest that the Archbishop himself should also have served a twenty-year prison sentence as the guest of the President of Italy.

But of course – he didn’t, rather he was to sit out an imposed, almost pleasant confinement, within the closed boundaries of Vatican City. This privileged decision almost certainly approved by the then ailing pontiff, Paul VI. It must have delighted him at the future diplomatic turn of events, which allowed him to escape judicial and other serious inquiries. One has to ask how did he spend his time in Vatican City without its popular bistros or manicured golf courses?

Most of the complicated financial scandals of the 1980s that washed over the Vatican in those damaging years and especially at the Banco Ambrosiano, prompted the noted historian Alberto Melloni to comment:

“[This must be] one of the darkest pages of Catholic history in terms of government and moral issues.”

On that basis alone Marcinkus – the most important American ever to work in the Curia – and his handling of the bank’s assorted tangled accounts in international banking and offshore deposits, would cost the so-called Holy See, $1.3 billion. And all Marcinkus could come up with for his rash currency actions, would be a popular sound bite that would forever be associated with his name, “You can’t run a church on Hail Mary’s.”

Some even claimed that the murdered banker, Roberto Calvi, had close Mafia connections (this would always be denied by his grieving family) that would lead in the paper trail to “God’s banker,” i.e. Marcinkus.

Whatever the financial motives and sweeteners, the Vatican grudgingly paid out $244,000,000 to angry creditors of the crashed Ambrosiano bank (at the time the largest private Bank in Italy.) They would call it, “Recognition of moral involvement,” whatever that means?

After this, the Italian courts issued a signed arrest warrant for the Archbishop and other lackeys of the bank claiming that they were, “Accessories to fraudulent bankruptcy.”

Naturally, the Vatican claimed diplomatic immunity (well they would wouldn’t they?) This legally offered the American Archbishop the much-needed gift of not having to take his rightful place in any criminal court. And of course Marcinkus, ever the master of sound bites could only say with a shrug, “I may be a lousy banker but at least I’m not in jail.” How true – it certainly was a different world in 1982, wasn’t it? But Marcinkus certainly did save the lives of two popes (no doubt about that), from two deranged assassins on overseas papal visits. Sadly he could not save his own damaged reputation!

It was the distinguished Catholic author, David Yallop, who in the mid-1980s, caught my attention when he claimed, concerning the death of John Paul I in his bestseller In God’s Name, by asking a cryptic question:

“Why was Bishop Paul Marcinkus wandering around in the Vatican at an early hour?” At, it seems, around the fatal hour the Pope was preparing to meet his Maker, either by the hand of God or by the corrupt hands of men who feared what this smiling Pontiff from Venice was about to publicly announce, concerning the Vatican Bank and their future careers. And what about that sight of the Archbishop at six-foot-three and weighing over 200 pounds (nicknamed the ‘Gorilla’), seen, it is claimed in full ecclesiastical regalia strolling in and out of those secret corridors of the papal chambers – somewhere that you and I will never see – perhaps even chain smoking. Now that must have been some vision to behold, don’t you think?

Marcinkus was certainly a popular but a complex man in and around the eternal city, hosting private dinner parties, and always welcomed at the much frequented L’Eau Vive restaurant, a gourmet’s delight we are told to visiting Bishops and others, to golfing in the early morning mist  (in the low 70s) from a tea at the exclusive accredited golf club at Olgiate. Archbishop Marcinkus, it seems, had no trouble enjoying this slice of mammon wherever he could find it’s worldly delights. But sadly with the untimely death (or was it murder) of John Paul I, the Papacy was then placed into the college of Cardinals (Sede Vacante) who then, after much discussion, collectively chose the unwilling Karol Wojtyla from Krakow, Poland as their new Pope. And according again to Robert Katz  ‘Luck of all luck’ (for Marcinkus) the Pope was Polish, and we have it on reliable authority that Marcinkus, the son of a Lithuanian immigrant, found in the new Pontiff a kindred soul, an American cousin.

But where did it all begin for this ambitious American? Well in Cicero, Illinois (the spiritual home of Al Capone.) The young Paul Casimir Marcinkus was born in 1922. The youngest of five children to a struggling devout Catholic Lithuanian couple.

Living was austere and money always short for the Marcinkus family, but the young Paul had it seems brains and ambition and after his ordination in 1947, he was selected for future service in the Vatican diplomatic corps, being posted to the Nuncio’s offices in Canada and Bolivia, where he would develop a gift for languages and putting people at their ease.

In Rome, in the 1950s he obtained a degree in Canon Law and later would be assigned to the Secretary of State’s office. This would be fortuitous to the young Paul, for there he would meet and befriend the young Mgr. Montini, himself to later become Pope Paul VI. In her memoirs Mother Pasqualina, Pope Pius XII’s German housekeeper recalls, perhaps with some irony that, the young Montini always lacked friends and personal confidence.

Much later the Pope would commit the disastrous mistake of appointing Marcinkus to run the day-to-day business of controlling the Vatican bank, this despite him having no previous financial aptitude or experience.

During those later impulsive days that resulted in the very near collapse of the IOR bank, Marcinkus with three prime movers would be investigated, by amongst others, the FBI.

Charged it seems, in a plausible scam to manipulate $950 million dollars in fake and counterfeit securities and derivatives on the international markets. Money and it’s management, is always dangerous, or so it seems, especially I suggest to a church financial administrator – well just look at the BCCI and the London family Bank, Coutts, and I have to ask in all sincerity, do future Catholic priests learn all about this in Seminary? But what I hear you ask, happened to the shamed Archbishop? What would his future be? Was he still a Vatican man? But perhaps, more importantly, what to do with him?

Well, he never did receive that sought-after red hat of a Cardinal. And just imagine, if the Pope had named him, he might, just might have been the first American Pope to stand on the balcony after the obligatory puff of white smoke from the Sistine Chapel! It does make you think, doesn’t it?

I do remember that there were, however, rumours in London, that the Vatican was promoting the idea that he just might be appointed the new Nuncio to the UK, based in Wimbledon Park, where Pope Benedict recently stayed during his controversial and shameful visit. But it was not to be. Too much opposition, it was claimed from the English Bishops and politicians would soon scupper this Vatican idea. Later he would claim perhaps with regret but without any repentance:

“I’m just a poor slob who worked hard to get taken in by the church in my town. I’m not a gangster in anything, but I won’t hide it from you that I know how things work in the outskirts of Chicago…”

Perhaps this should be the final obituary to this priest who courted all that this fallen world had to offer him but sadly would only to succumb to a slow death in the arid air of Arizona of emphysema.

“Vanity of Vanities saith the preacher, vanity of vanities; all is vanity” (Eccl. 1:2)

The Catholic church allowed Marcinkus, which he had served so long and so faithfully, to quietly retire in 1990. He was, it should always be remembered, never found guilty of any financial or other serious wrongdoing.

His story began in Chicago and finally ended there on 2 March 2006, where after a full requiem Mass in the Cathedral, presided over by his friend, Cardinal George O.M.I, where he was laid to rest in the St. Casimir Lithuanian cemetery, next to his parents.

Sadly his lasting legacy to the world will always be attached to the corrupt practices of Messer’s Cody, Caserolli, Sindone and perhaps the innocent Roberto Calvi and two popes!

It was also reported he leaves a son by his mistress.

Much has been written about this period in the Catholic church and its cast of suspects. Also, we on this website have researched a great deal of this period and will continue to do so to update future articles.

I am indebted to the many obituaries on the late Paul Marcinkus and also to Robert Katz’s informative article The shady deals of God’s Banker. Well worth a look at if you have the time or interest.