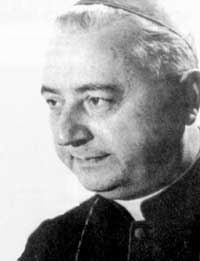 It all went wrong I suspect for Annibale Bugnini when in 1975 he accidentally left his battered briefcase in a conference room in Rome.

Further investigations by a Dominican Friar of the attache’s case and its ownership, revealed Masonic letters from secret societies in and around Rome, to the owner.

From then on it was all downhill for the liberal bishop, known as the “infamous Bugnini.”

This highly regarded expert on Vatican liturgical reform had worked for three popes and been sacked by two.

Much of the meaning of the modern mass today and why traditionalists loathe it so much is laid unfairly at his door.

Annibale Bugnini naturally denied all Masonic rumours and saw their accusations as a character attack on his damaged reputation.

One Italian newspaper at the time stated that there were over 100+ practising Freemasons in the Vatican and in church hierarchies, with some even suggesting that Paul VI was a closet Freemason.

By 1976 Bugnini, with the title of apostolic pro-nuncio, was exiled to Iran (not many Catholics there I suspect.) But then maybe he was sent to watch over vast Vatican financial holdings in the country by Paul VI, just as Ayatollah Khomeini was landing in Iran on a chartered Air France plane. He had been living in exile in a Parisian suburb at the time of the revolution.

Later 52 American embassy workers were held captive for 444 days with poor Bugnini and others trying to obtain their freedom. In this, he failed.

In the last years of his life, he would always deny the lingering Masonic charges. He died in Rome in 1982.

So was he a Vatican “patsy” who took the blame?

According to the Powerful Cardinal Oddi:

“I remain convinced that these accusations [of Freemasonry] were made up by someone…who wanted to eliminate him.”

And according to Abbot Boniface:

“There have always been Freemasons among the high ranking prelates of the church…I have come to understand that Freemasonry is a power that is much bigger than we think.”

And its no coincidence that one of the Grand Masters could warn the Pope in 1943:

“…You would exterminate us. Be careful! You must accept the alliance with Satan, and admit that he completes God.”

This is blasphemy and I suspect that Bugnini came to realize it-perhaps he was about to blow the whistle on his Masonic Masters. Either way, it was too late for him.

Somehow his redeeming moment had passed.

And “Buan” would take his secret to his grave.

“A fifth column exists within the clergy and is steadily working in favour of atheism, “Pedro Arrupe, Jesuit Superior-General.

Now, who do you think he’s referring to?