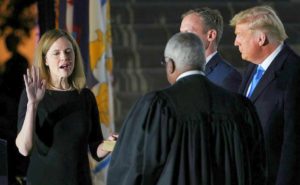 This article demonstrates once again the power and influence Catholics enjoy in America. However, devout Catholics are first and foremost under the authority of their cardinal, not country. At least that is how a ‘good’ Catholic is supposed to behave.

While it is to be welcomed she is pro-life, her heretical views on the papacy and Mary and how only her church is ‘legit’ will be of grave concern to Bible believers, especially former Catholics now saved.

In many ways, Trump is poorly advised to have so many Catholics in such senior slots in his government and now America’s highest court in the land.

The real victors are the Vatican, not America!

(On a personal note, her seven children, are the real victims for now that she has been appointed to this powerful position, they will see even less of her. Career over children it would appear).