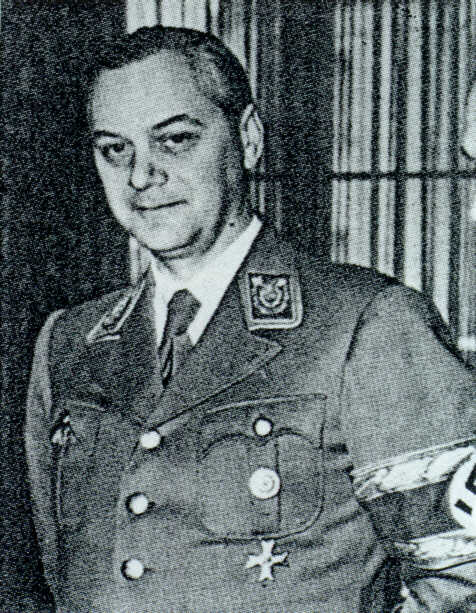 Born on January 12th 1893 (and strangely enough, he shared his birthday with Hermann Goering, and if Goering hadn’t conveniently cheated the hangman at Nuremberg, Alfred Rosenberg would have been executed on the same day alongside Goering.)

Born in the Baltic state of Estonia, to lower-middle-class parents, he was it seems a precocious boy who would search for any future allegiance in reactionary issues; he would later support the “whites” in Russia and in disgust after Lenin’s communist revolution, move to Germany.

Gaining his PhD in 1919 he could now call himself a doctor and isn’t this always a badge of authority.

He joined the Nazi party, as it would be called in January of 1919. (Hitler would sign up in October of that year.) Rosenberg had incidentally been a member of the “Thule Society” and many of its members later become fanatical Nazi followers as well.

The word Thule according to its members was another name for Scandinavia and was the birthplace of the “pure Aryan race.” All devout members aspired and hoped to be descended from that “sacred breeding ground,” but I suggest few ever did if the truth were known. It seems also an occultist and Satanic practices were part of the clubs ideology.

I certainly suspect that Alfred Rosenberg’s complex personality caused him to eagerly adopt popular anti-Semitic beliefs that would later become his own beliefs. And In 1945 a prison shrink in Nuremberg wrote of his personality that he was a “bigoted, philosophic dilettante, who distorted history to justify aggression.”

“Maybe we went a little too far,” Rosenberg cautiously remarked about the mass murders of so many Jews and others in and out of those war years.  Guilt always seems to be the hardest trait to admit to.

Today this priest is a “saint” of the Catholic church! How sickening!

Rosenberg’s notorious claim to fame in the Nazi rogues gallery has to be his bookThe Myth of the 20th Century, which is still in print by the way. (We will offer a separate critique of this book as well.)

It should also be remembered that Rosenberg’s book and Hitler’s Mien Kempfwere penned long before the Nazis ever came to power. And isn’t politics always about being a pragmatic trick I suspect Hitler the politician learned very quickly, but not perhaps Rosenberg the academic.

Alfred Rosenberg was a qualified architect and this would be another trait that would impress Hitler. It’s interesting to note that Albert Speer, also an architect, and Rosenberg would become two of Hitler’s willing henchmen, both I suggest would be trainee Nazis in the early 1930s but later both men would have graduated and had grand designs on perfecting Hitler’s third Reich-and much more!

Some selected extracts of Hitler’s Mien Kampf seems to have been lifted from the pages of Rosenberg’s book. Mixed in also with mystics and philosophers that Hitler had studied. One such influence was Huston Chamberlain. It is also interesting that whilst Hitler began his “cushy” sentence in Landsburg prison he had previously appointed Rosenberg as temporary leader of the Nazi party-so no personal threat there to Hitler it seems. However daily visits to the prison and with a Jesuit priest, Bernhard Staempfle, were made by the two men and others. Seems these “planned visits” were arranged to collect finished drafts of Hitler’s pre-published book.

Bernhard Staempfle would later edit these. What is interesting to us is the sinister role of the Jesuits in this secret matter. Staempfle who as a Catholic priest could work it seems with anyone to help promote an anti-Jewish agenda. And wasn’t Hitler born, baptized and buried a Catholic after all? Staempfle had also known Gelli, Hitler’s young niece. He was then a priest in Munich and may have been aware of her mysterious suicide/murder. He later officiated at her funeral. It’s rumoured he knew far too much for Hitler’s liking and for this he would later be murdered in the notorious night of “the long knives.”

Hitler’s book was ultimately by law to replace the Bible. Then as today, the Holy Bible has many enemies. Later the Swastika would replace the crucifix. The psyche of these men is breathtaking!

Baldur Von Schirach could happily explain that: “Rosenberg’s way is also the way of German Youth.” Both these men would deviously corrupt the minds of children with this pagan German faith movement. One has to wonder how many Germans did buy into this fake faith movement, and where were the real Christians throughout this era?

One amusing episode concerned Rosenberg’s visit to London in 1936. It seems he rubbed the backs up of a lot of politicians he had met. Even a wreath laid at the London cenotaph by him was later thrown into the River Thames-Some saw through the curse of Nazism and its blasphemy against the one true God.

Rosenberg had hoped to be the new German Ambassador to the Court of St James’ in London about this time but it was not to be, instead, Joachim Von Ribbentrop was eventually appointed by Hitler. And he was to make a dismal impression as well.

Later as Rosenberg’s influence over Hitler decreases his literary output increases. His assorted letters and articles would later influence the Nazis planned thinking and future hostile treatment of all its selected enemies in occupied countries. At home, the dangerous medical selection of eugenics was also being ushered into German society through the Courts.

Rosenberg would certainly support all of this.

I have to say here that the stark warnings that Rosenberg warned about in his book are to a degree perhaps still with us, but what he absolutely missed out on was the coming fundamentalist Islamic threat and the growing Roman Catholic ecumenical movement. These certainly are a serious threat to the real child of God today in the 21st Century.

Perhaps more so than ever in these Biblical end times.

By 1940 Rosenberg was appointed Reich Czar over occupied Eastern territories (he was of course from that region himself.) This could only mean the future obliteration of the Slavic people (either through experimentation or extermination through the concentration camp system.)

With the wars end communism and Catholicism had survived but Hitler’s “thousand-year Reich” was now kaput-and now the victorious Allies prepared for the trials of those in their custody. And Rosenberg would soon join the other eleven Nazi overlords for the final reckoning at Nuremberg.

In the court, Rosenberg naturally pleaded innocent to charges of war crimes and it’s interesting to note that two of his deputies had attended the infamous “Wannsee conference” in Berlin when in 1942 a plan of murder was finalised by Reinhardt Heydrich.

The final agenda finally agreed upon was to plan “the final solution” concerning “the Jewish problem.” However I refuse to accept that Rosenberg was innocent in not knowing about the mass murders that were happening all around him and beyond-and if he didn’t know about them, he should have done.

One strange entry in his personal diary for April 2nd 1941, apparently after a lengthy meeting with Hitler concerning the fate of the Jews reads: “What I do not write today, I will none the less never forget.” What did he hear that was so terrible he could not confide to his diary-this is a man of letters don’t forget.

Later at the trials end, he was found guilty of war crimes against humanity on all four counts.

At his execution when asked if there was a final word he wanted to say for posterity he replied simply, “no.”

(On a note of interest, this hanging like the other executions carried out that night of Oct 16th, were badly bungled. Master Sgt. John Woods, an American assisted by Joseph Malta, had prepared them. But were they up to it? Well from viewing the hideous pictures of the bodies, the answer has to be a flat no.

And it has been claimed by witnesses that some of the executed took up to ten minutes to die by slow strangulation. British professional hangman Albert Pierpoint would have been shocked by this amateur handling of the hangman’s duties.) The facial injuries from a heavy swinging trap door fractured the nose of Keitel. The bleeding on his face is terrible to see.

It is also claimed that Woods never participated in an execution again. I’m not surprised, and it is rumoured that the Sgt. even kept selected small rope samples as souvenirs. Can you believe it!

Earlier after the verdict had been given a pale-faced Rosenberg paced his cell exclaiming to whoever would listen to him that: “The noose the noose, that is what you wanted isn’t it.”

Later when offered a Bible by perhaps the prison Chaplin, he refuses. Naturally!

Alfred Rosenberg lived, as he would die in his sin as so many others have and will continue to do so.

Finally, Hitler’s “high priest” of Nazi doctrine, persecution and prejudice was hanged. His body was then later taken to Dachau for cremation. Then scattered to the winds of that bleak place or washed by the river into the Danube.

Today his legacy of hate and poison still survives in this fallen world.

(It’s of interest that his daughter Irene has refused contact with anyone seeking information about her father.)

Sadly there are many who still feed upon his anti-Semitic doctrines of hate-and, especially in the Middle East. Somewhere I read that his books are displayed in prominent Middle Eastern libraries and elsewhere this would no doubt have pleased his ego. Yet the Bible informs us: “Seek ye first the kingdom of God.”

Of that summons, Alfred Rosenberg rejected it and instead persecuted those who did indeed seek it and for this, he will be judged accordingly.

It seems one of Alfred Rosenberg’s lost diaries has surfaced after 70 years. It is believed to have been secreted out of Germany by a U.S Prosecutor, soon after Rosenberg’s execution at Nuremberg.

The diary, if genuine, talks about the mysterious flight of deputy leader, Rudolf Hess to England in 1941, and the shocking plans for mass extermination in Russia, as well as a deep discord in the German High Command.

It is not clear if the diaries are being offered on the open market, with perhaps a historical institution leading the bidding.