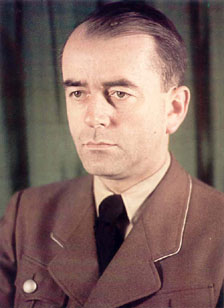 This year sees the thirtieth anniversary of the death in London of Hitler’s favourite architect and close friend, Albert Speer.

Today Speer remains the most controversial and perhaps the most enigmatic of the so-called “Hitler’s Henchmen.” More important to us was this man aware of the “Final Solution” and forced exploitation of slave labour?

Albert Speer once claimed that everything in his life had come easily to him.

And for the purpose of this article, we can perhaps place his life into three important time periods

(1) Youth and the Nazi Party

Born in 1905 to a privileged lifestyle, the Speers were a professional family of architects and naturally, the young Albert wished to emulate his father-it seems he also had the talent to do this.

Postwar Germany was, of course, witnessing a country struggling for survival. Severe food shortages that had ravaged millions of Germans barely seems to have touched the Speer household. It seems love and warmth were also absent in this household. Of Germanys humiliatingly defeat it seems this and politics were never even discussed at the dinner table. And certainly not religion.

Later studying in Munich and Berlin, Speer married his wife Margaret and would go on to father six children. (His parents did not approve of their son’s marriage and did not attend.) But like many others, he was searching for a meaning in his life.

In 1931 he was to make the lasting acquaintance of his future mentor Adolf Hitler. Joining the NSDAP (Nazi Party) he was issued the membership party number of 474,481. A later invite to lunch with Hitler would seal Speer’s fate forever.

Speer’s architectural follies would also attract Hitler artistic interest. He would be commissioned to re-design Nuremberg and Berlin.

Out of this friendship would arise Hitler’s dream of a new city “Germania.”

This massive new metropolis would have levelled boulevards a vast meeting hall (to hold 180,000 people.) And situated on the highest dome was the eagle crowning the building within its sharpened claw is the swastika held upon the world and this future city would house ten million people. (Apparently, Speer’s 75-year-old father, himself an architect, remarked after inspecting the full-scale plaster Cast: “You have both become totally mad,” shaking his head sadly.

Hitler often mused on the fact that his Metropolis would be the spiritual Nazi home for 150 million Europeans….rather like Mecca or the Vatican for its faithful you might say.

The preparation and planning of this future city would bring both Hitler and Speer into what has been called a “homoerotic friendship.” And though I doubt very much that the relationship was ever sexual between these two men, some of Speer’s recorded remarks do sound interesting in context such as: “In those first years I was ready to follow him [Hitler] wherever he led and I was dizzy with excitement!”

This sounds more like the dreams and aspirations of a teenage girl and not the musings of a 28-year-old married man.

Certainly, as the dominant force in the relationship and I suggest Hitler realized much of his own thwarted ambitions would be accomplished by Speer the son he never had. And perhaps this interesting sexual (though unconsummated) relationship between master and apprentice can perhaps never be fully explained or even ever understood. It still remains a talking point in some circles.

Finally, it’s amusing to speculate that the European city of Brussels could perhaps have been Germania! If the Nazis had won the war!

As the War careered towards total destruction for Germany and its people, Albert Speer as Armaments Minister, was amazingly able in increase the Reich’s military production line, particular in Panzer tanks and all of course with the terrible use of slave labour. He still even enjoyed privileges within Hitler’s inner circle, as others would be swiftly banished from Hitler’s court.

On Speer’s 40th birthday as the final curtains fell on the Third Reich, he was presented by his Fuehrer with a signed photograph. One has to speculate if it was propped up in his cell over the following decades and he did once remark that he used to dream about Hitler-frequently. All Very strange.

In the final year of this disastrous war Speer apparently realizing all was lost and I certainly suspect he saw the spidery writing on the wall well before 1945. So before this, he apparently decided on finishing the Fuhrer and using a strain of Tabrun nerve gas. (He would arrange to have it dropped into the ventilation system of the bunker. It’s now evident that the whole of this story that he related to the court was just fictional.)

However Hitler’s uncanny intuition once more saved him, he simply had the air inlet covered!

His final farewell in the Bunker/Chancellery, much of which he had designed with Adolph Hitler-was on 23rd April 1945.

“So you are leaving then? Good. Until we meet again,” mumbled a trembling Hitler to the man he had placed so much of his inner self into. And with that dismissive gesture, Albert Speer would walk into captivity whilst Hitler would finally descend screaming into Hell, prepared for the devil and his angels (Matt. 25:41.)

Before Nuremberg “Histories Greatest Trial,” as it was called, the American’s had taken a close interest in Speer and the troika of Paul Nitze, George Ball, Ken Galbraith (all one world men) that were dispatched to grill him for important military information that would assist the US in the coming onslaught of Japan (perhaps carpet bombing.) And interestingly at Nuremberg, the American prosecutor Robert Jackson would be criticized in his soft approach to questioning Speer, I also suspect Jackson was well acquainted with the previous troika.

Speer would enjoy three brief weeks of freedom before being held captive in Nuremberg prison. The Commandant at the prison wrote that he was 40 years old, very businesslike and co-operative. He also scored an IQ test of 128 (later at Spandau from 1947 onward he would be housed in cell number 17.) All in all, he would remain the next 21 years behind prison bars. Mainly at the Allied-controlled Spandau prison. (The building has since been demolished.)

The Nuremberg war trials witnessed Albert Speer along with other convicted prominent Nazis sitting in the dock accused of appalling war crimes. (Watching the old black and white newsreels of the defendants, there seems to be a lot of handshakings and back-slapping, almost as if they have all met for the first time. Looks like some old boys masonic reunion-very strange.)

For 18 months they were incarcerated by Colonel Andrus, then a strict military disciplinarian. Spiritual guidance however for Speer and others arrived with Chaplin Gerecke, the Lutheran army minister, who believed half of the prisoners repented and were saved.

Of Speer and his religious beliefs or his relationship with God remained somewhat hazy. He would at times come under the pastorship of a Calvinist minister, a Catholic priest and a Rabbi. Boy, what a cocktail of organized religion and none of it could or would ever save his immortal soul.

He would confess in the 1970s when asked if he really believed in God, he paused and replied: “I don’t think so.” Or was it all just an intellectual past time for him.

Later yet another spiritual cleric he knew once claimed: “I was convinced that he had sincerely repented.”

And later in 1953, he would affectionately write to his daughter:

“My parents didn’t go to church…..At school, the Chaplin imposed the learning of Psalms by heart as a punishment! Your mother and I did marry in a church…Hitler never forced anything on us-on the contrary to leave their churches, and he himself, as you may know, never formally renounced the catholic church…I suspect he couldn’t give it up.” (Now this is interesting because is all religion and Catholicism is dangerously addictive.)

So it seems that Speer’s hesitant journey in faith and perhaps seeking repentance was a hit and miss thing-something he examined intellectually and but never as a lost sinner. I suspect his intellectual arrogance remained always with him or rather part of his persona. (Romans 11:20 reminds us “be not high minded, but fear.”) Rather do not be arrogant but certainly be afraid.

The Spandau prison years were the longest of Speers forced incarceration.

Amazingly during this period, he would smuggle out to the outside world thousand of scraps of paper, toilet paper, and any other discarded writing material he could lay his hands on. Apparently, this was done by bribing certain prison guards to take them out of the prison.

The point of this willing labour was to be part of his printed memoirs Inside the Third Reich, 1969 and Spandau the secret diaries, 1976. He also enjoyed his daily walk in the prison exercise area-he even calculated he had walked around the world within his mind-aided by assorted travel guidebooks.

Later planning a garden that was mischievously named “Speer’s garden of Eden.” He would also practise his professional skills to raise assorted flowers, a paved path and fresh vegetables for the prison kitchen, to be eaten by prisoners and guards alike no less.

One has to speculate whilst preparing this horticultural task did any sadness or denial about the planned Jewish holocaust ever invade his memory.

His abilities and talents were still paramount even there in jail. But did he recall the one concentration camp he had visited as Minister of armaments and munitions that of “Mauthausen” or was it all airbrushed from his mind like melting snow on the long flight home?

These good works in the prison garden would not be enough to save him from the Judgment that comes to all one day.

When the murder of President Kennedy in Dallas shocked the world, grief overtook him, and he would write: “We are building on sand.” Isn’t life always fragile and passing?

Freedom for Albert Speer arrived at midnight 1st October 1966. “I’m quite glad to be out,” he said smiling to the world press-fame had arrived-the new Speer would quickly reinvent himself. Then seated in a fast car followed by the paparazzi he then returned to the family home in Heidelberg.

During the next fifteen years, Speer through his published memoirs would become a wealthy man.

The myth that he was “The good Nazi” somehow seems to have evolved in the 1960s. Through these and other means he quietly reinvented himself, very little guilt or contrition were ever seen or mentioned at least to the public.

Perhaps this is the myth of the murderer.

In 2005 new documents were discovered that revealed Himmler and Speer had discussed Auschwitz with the idea of using even more slaves to fuel their grotesque empire of torture and sin.

And a chance remark that surfaced on 2007 seemed to confirm he knew much more than he would ever admit.

But I propose that if new incriminating damning evidence had been presented by the prosecution at Nuremberg in 1946, Albert Speer would certainly have hung by the neck in the prison gymnasium as the others prisoners did on the night of 16-17 October 1946.

Instead Speer suffered a heart attack in a London hotel in 1981 just hours before he was due to take part in a BBC Television programme, and apparently, his young mistress was with him at the time. He was then later pronounced dead in St. Thomas’ Hospital.

Today he is buried in Heidelberg cemetery, along with his reputation and guilt and the terrible haunting screams of his innocent victims.